The 2018-19 was nothing short of historic for hockey in Springfield. For the first time in the modern era of the AHL, the city was selected to host the AHL All-Star Classic. The two-day showcase on Jan. 27-28 inside the MassMutual Center produced many memories for the home fans.

Anthony Greco made perhaps the biggest splash of the Skills Competition when he set the new AHL All-Star record for fastest skater with a time of 13.251 seconds.

The next night, the North Division took home the title of AHL All-Star Challenge champions, defeating the host Atlantic Division at the conclusion of the round-robin, 3-on-3 style event.

Outside of the historic AHL All-Star Classic weekend, the Thunderbirds season was also a record-breaker in the stands. Including the two All-Star dates, the MassMutual Center was packed to capacity 11 different times, including six of the final Saturday night home games. For the first time since the 1999-2000 season, the Springfield AHL team drew an average of more than 5,000 fans per game.

Greco again made history on the season's penultimate day when he tallied the first 30-goal season in Thunderbirds team history. Captain Paul Thompson (26 goals) and Dryden Hunt (23 goals) joined Greco in the 20-goal club in 2018-19.

In net, Chris Driedger arrived on the season for good shortly after the Christmas holiday, and all he did was post the league's highest save percentage at .924 in 32 games. He was the first T-Birds goalie to ever lead the league in a goaltending category, and the first-year netminder also set the T-Birds record for goaltending wins in a single season with 18.

The 2017-18 season was a banner year for you, the fans! Our most loyal supporters helped sell out the MassMutual Center nine times over the course of the regular season. The season seemingly never went two weeks without a game-changing experience, beginning with yet another packed Opening Night.

In November, the Thunderbirds picked up the pieces from a tough start and made Nov. 11, 2017 a night like no other. Big Papi himself, David Ortiz, paid his first ever visit to Springfield, and in front of one of the most raucous crowds in Springfield hockey history, the Thunderbirds put together a comeback for the ages. 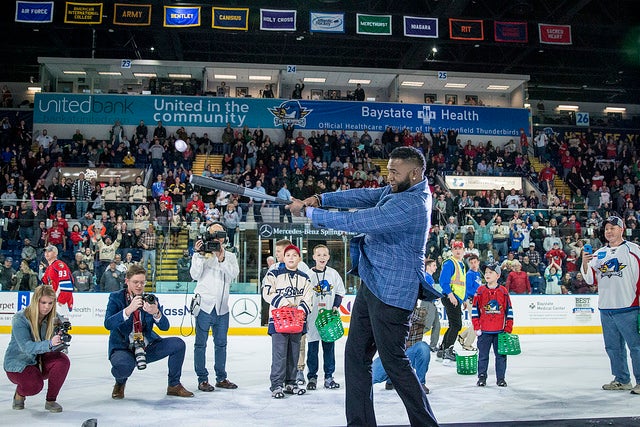 The year would see offensive records get shattered from season one to season two. After having zero 20-goal scorers in 2016-17, the Thunderbirds had four in their sophomore campaign: Anthony Greco (29), Dryden Hunt (23), Alex Grenier (20) and Curtis Valk (20).

Alex Grenier represented the Thunderbirds at the AHL All-Star Classic in Utica, where he previously played four seasons for the Comets. All he did in his return to his former city was blast a 104.1 MPH slap shot to win the Hardest Shot competition with a mark that topped all players in both the NHL and AHL All-Star Skills Competitions.

Valk's 42 assists and 62 points both set new Thunderbirds franchise records for a single season. Meanwhile, on the back end, Harri Sateri turned in a remarkable bounceback within the season. After going 0-5 in his first five starts, Sateri went 14-4-3 with four shutouts and a .936 save percentage. His .927 save percentage for the season ranked him third in the entire AHL. 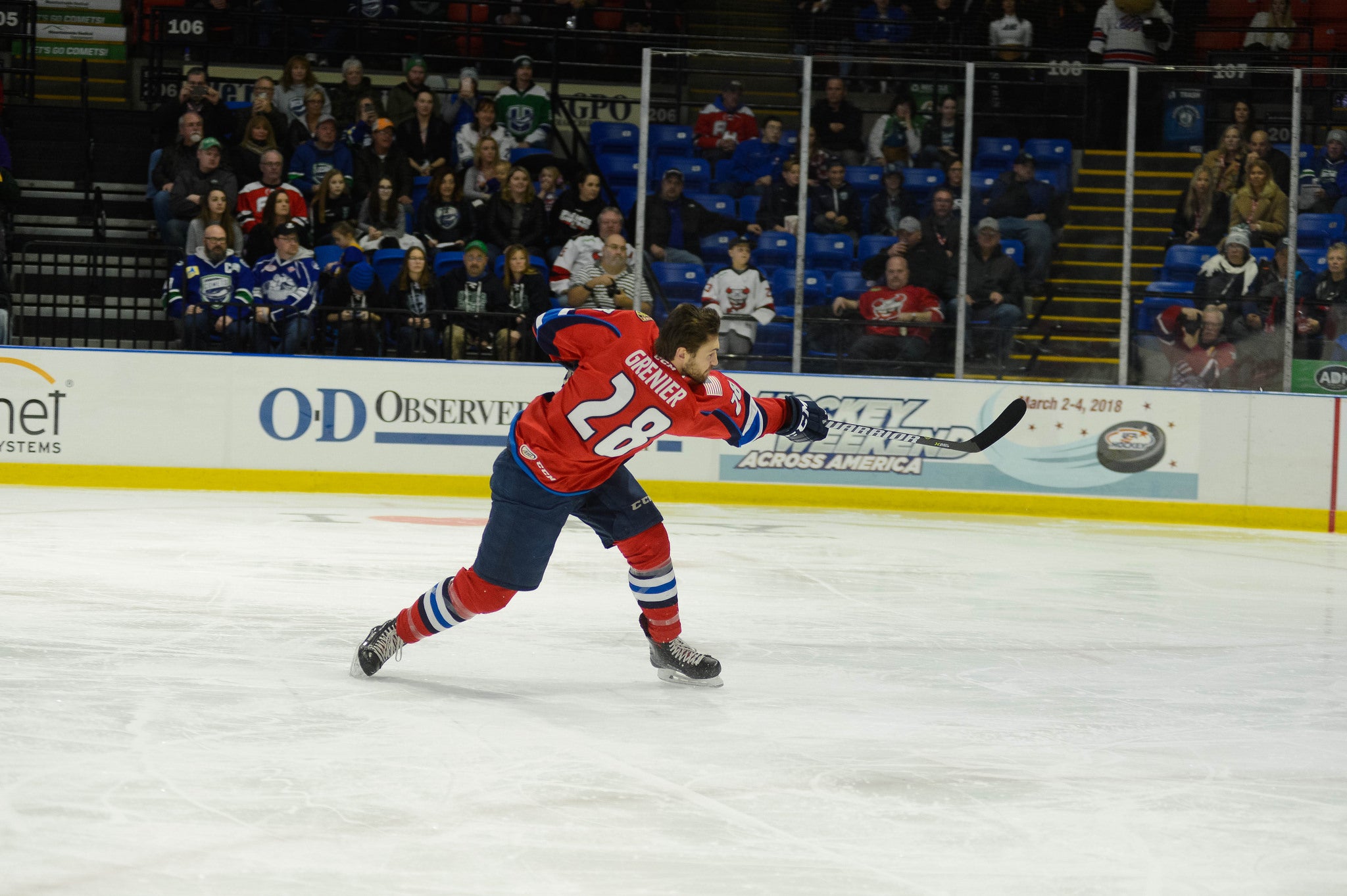 For a second straight year, the Thunderbirds finished with a winning record and 19 triumphs at the MassMutual Center, while selling out their home barn on nine different occasions. The 2018-19 season figures to be another exciting year, culminating with the 2019 AHL All-Star Classic presented by MGM Springfield on Jan. 27-28, 2019 inside the MassMutual Center.

The history of hockey in Springfield dates back to 1926 and the introduction of the Springfield Indians to the Canadian-American Hockey League. The Indians captured championships in each of their first two seasons in the CAHL. In 1936, the American Hockey League welcomed the Indians to the league, and with the exception of a brief hiatus in the early 1950s, the city has had a presence in the AHL ever since. One of the early AHL pioneers for hockey in Springfield was Hockey Hall of Famer Eddie Shore. A four-time Hart Memorial Trophy winner with the Boston Bruins, Shore played parts of three seasons with the Indians before taking on roles as coach and owner in the years following his playing career.

When the Indians made their return to the AHL in 1954, championships were quick to follow. Playing out of the Eastern States Coliseum in West Springfield, the Indians captured three consecutive championships from 1959-1962, winning both the Teddy Oke Trophy (regular season champions) and the Calder Cup each season under the direction of head coach Pat Egan. The 1960-61 edition of the Indians may have been the best ever AHL franchise, as the offense lit the lamp 344 times, almost 100 more times than the next closest team.

After undergoing a name change and becoming the Springfield Kings in 1967, the city found itself on top of the AHL world in 1970-71, winning the fourth Calder Cup in team history despite entering the playoffs with a record of just 29-35-8.

The franchise underwent another rebranding, this time returning to its Indians roots in 1975. That same year, they captured their fifth Calder Cup championship.

The 1980s did not go auspiciously for the Springfield franchise, as they slipped into a Calder Cup drought.

After more than a decade without a Calder Cup to their credit, the Indians ended a 15-year wait in 1989-90, capturing the franchise's sixth championship. Not to be outdone, the Indians repeated in 1990-91 for the seventh and final Calder Cup to come to Springfield.

The Indians' name was discontinued before the start of the 1994 season, as the team rebranded as the Falcons. The club achieved much regular season success, reaching the Upon the Falcons' move to Tucson, Ariz. in 2016, and with the Portland Pirates closing their doors soon after their playoff exit, AHL hockey made its return to Springfield officially in June of 2016.

“The Springfield Thunderbirds’ name represents the strength and pride of western Massachusetts. It is a nod to our hockey past, a tribute to the men and woman of the Air Force who are so vital to this region, and a symbol of the new energy and spirit that is palpable in Springfield,” said Nathan Costa, the Thunderbirds Executive Vice-President.

In their inaugural season, the Thunderbirds brought a renaissance of hockey to the Pioneer Valley, seeing over 4,600 fans convene in the MassMutual Center on average. On the ice, the Thunderbirds fought valiantly in a tough Atlantic Division that saw five teams eclipse 92 points on the season.

The Thunderbirds opened the new era of hockey in Springfield with a thrilling, come-from-behind 5-4 overtime win on Oct. 22, 2016 over the St. John's IceCaps. Defenseman MacKenzie Weegar picked up the overtime winner for his first goal in a Thunderbirds jersey. 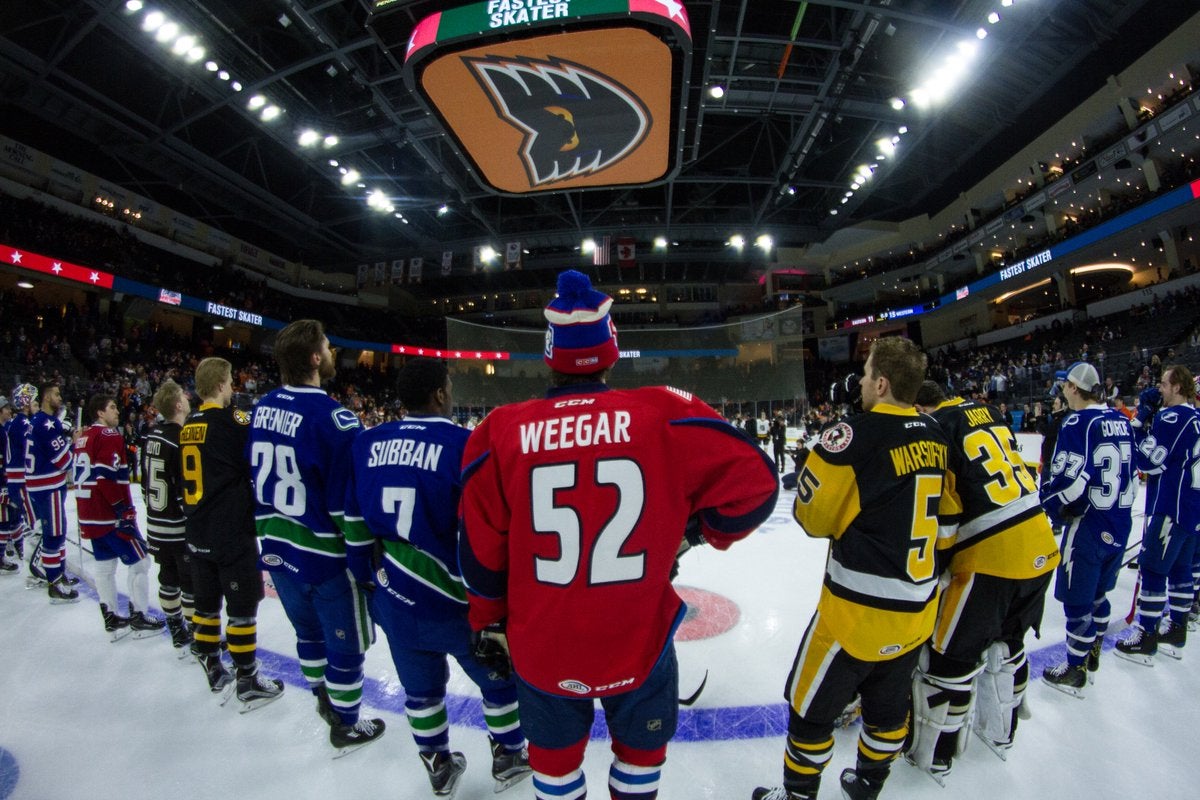 Just a few months later, Weegar made his own piece of Thunderbirds history as the first T-Bird to be selected to participate in the AHL All-Star Classic in Allentown, Pa.

While the Thunderbirds had some trying times in January, the team came roaring down the stretch, excelling on their home rink in the process.

In their final 14 games at the MassMutual Center in 2016-17, the Thunderbirds won 12 contests, including a franchise-record five-game home winning streak to end the season just one game under the .500 plateau. That feat was made all the more impressive considering the youthfulness of first year head coach Geordie Kinnear's roster.

Of the 45 players who dressed in Thunderbirds red and white, 35 of them began the year aged 25 or younger, including 11 AHL rookies.Their young defense finished the season in the top-ten among AHL teams in goals against per game.

Three times in 2016-17, the Thunderbirds sold out the MassMutual Center, and the team responded, winning all three games before the capacity crowd.