Where does a gold medal journey begin? At what point is the dream and the vision realistic enough to consume one’s life?

The answers to these questions are as vastly unique and awe-inspiring as each and every flake in a winter storm. 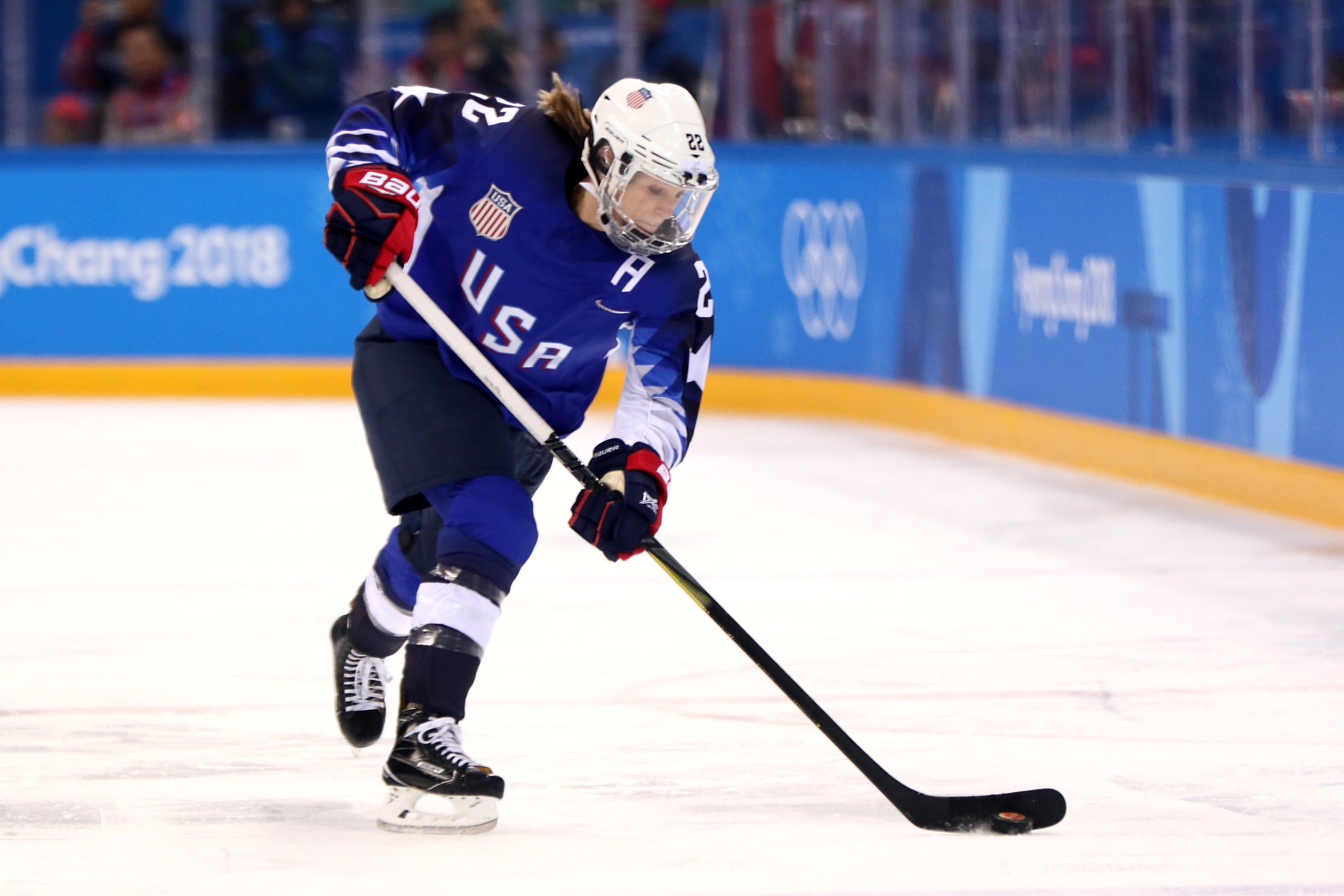 Some 25 years ago, one such journey began in the basement of a home where Rob Bellamy – who would one day skate for the University of Maine and in over 350 professional games – was making his earliest hockey memories.

On this day, however, it was his little sister Kacey’s turn for a lifelong dream to begin. Just five years old, Kacey Bellamy – like so many young siblings – imitated her big brother by walking upstairs in his equipment. Her next move would change her life forever.

“I told my parents I wanted to play hockey,” she recalls so simply and yet so vividly.

Despite hesitations from her father, there was one other parent to convince.

That approval spring-boarded Bellamy on a ride that would feature checkpoints at many of the same key moments of a whole generation of young New England hockey players. From the adoration of Boston Bruins legend Ray Bourque and his dynamic ways on the blue line – the position Bellamy would play – to the collective celebration of seeing him lift the Stanley Cup, even if in Denver instead of Boston, Bellamy was a true Bruin through and through.

Of course, there would be female heroes along the way, beginning with Cammi Granato, who captained the U.S. Women’s Olympic hockey team to gold in Nagano in 1998. Four years later, Granato and Team USA would come up short of gold, but in drawing a silver, they laid a foundation for another winning cohort to follow.

As a freshman at Berkshire School, Bellamy and her teammates gathered at a coach’s house to watch the 2002 gold medal game.

“I remember sitting there taking it in like a sponge,” said Bellamy. “That day, I said to myself that I want to be (in the Olympics) someday, and I think from that day forward, I made it a mission and a motivation every day.”

An oft-used but true axiom of sport is that victory is sweeter when there are obstacles and, far too often, heartbreak along the way. The U.S. Women’s Olympic hockey team epitomized this, beginning with a loss at the hands of host nation Canada in the Vancouver 2010 Games.

“For a lot of us, Vancouver was our first Olympics and we really took that loss hard,” Bellamy recalls. “For those next four years leading up to Sochi, we had that gold-medal, can’t-lose type of focus and it was all we could think about.”

The hurt would only grow as Canada ripped out Team USA’s hearts by erasing a 2-0 third period deficit before capturing a 3-2 gold medal championship in overtime in Sochi four years ago. Despite the open wound from such a stinging defeat, Bellamy felt a change in the national team following its conclusion.

“After 2014, I think we took a step back and we really learned a lot as a program, and we made it a mission to take it day-by-day and focus on the little things. Leading up to Pyeongchang, I really think that the mental aspect of how we worked and trained really paid off in the end.”

Bellamy and her team’s attrition would be tested in the gold medal game last month in South Korea. Trailing 2-1 in the third period of the gold medal game, the Americans rallied to tie, then survived a Team Canada power play in the closing moments of overtime to get the game to a five-round shootout, where Jocelyn Lamoureux’s sensational and viral goal ensured the first U.S. women’s hockey gold medal since 1998. Maddie Rooney sealed the win with one final save in the sudden death round.

“As soon as Maddie made that save, the feeling that goes through your body for those 10 seconds of getting over the boards and going to your teammates is a feeling unlike any other that I’ve ever experienced,” Bellamy happily recounted.

Kacey Bellamy had reached the top of her mountain. Yet, with a gold medal around her neck for the better part of a month, there are times when she still does not feel it has become a reality.

“Honestly, it hasn’t sunk in,” Bellamy says. “(but when) I went to speak at an elementary school, it hits you when you see the little kids getting so excited and seeing the smiles on their faces being able to see the medals. It’s something that will last a lifetime in my memories, for sure.”

While Bellamy has fans of all ages throughout the country, she never has forgotten about the five-year-old who just wanted to try on her big brother’s equipment in the family basement. While the medals will always be the prized and tangible reminders of her accomplishments, another intangible feat has its own pedestal.

“I think the game has grown tremendously in the last ten years. I think it has a lot to do with us being role models as national team players and growing the game. We’re players and we’re playing and that’s our main job, but you’re not going to play forever, but you can grow the game forever, though.”

That growth has appeared in many forms, including the Pyeongchang Games, which were the most tightly contested in the last 20 years – perhaps it is no secret that overseas camps have helped to boost countries like 2018 bronze medalist Finland – and through a greater coast-to-coast influx of women’s hockey programs throughout the United States. According to USA Hockey, the number of female members of the program has risen from 65,700 in the 2012-13 season to 75,832 at the conclusion of the 2016-17 season. That figure includes a greater-than 10% increase in both the 6-and-under & 7-8 age brackets from 2015-16 to 2016-17.

Undoubtedly the impact of Bellamy and the U.S. Women’s national team has been instrumental to those rises at the youth level, but for Bellamy, she hopes that with that growth in numbers, the passion for the game never ceases, much the same way her own dreams never wavered.

“(I would tell young girls looking to play) to make sure you love it and that it never feels like a job,” Bellamy implores. “Have a dream, first and foremost – what’s your dream, what do you want to do, what do you want to accomplish? – and set small goals that you can work on every single day to get better to reach that dream.”

Kacey Bellamy’s roots will always lead her back to the basement of her childhood home. Her dreams allowed her to rise up to the peak of her sport, all while being the child who adhered to her mother’s ultimate wish: doing what makes you happy.