From the Coach's Vantage Point: Kinnear Reflects on 2017-18 Season

Every coach understands that a six-and-a-half-month season will not come and go without some semblance of adversity, be it injuries, the occasional tough road trip, or personnel changes brought upon by the NHL affiliates.

But even for Thunderbirds second-year head coach Geordie Kinnear – a man prided on his team improving every day regardless of what the scoreboard depicts – October of 2017 presented an entirely new degree of a challenge.

2-11-1-0 in the first 14 games. “Rock bottom” as he termed it. His offense had sputtered; his defense and goaltending had underperformed relative to their potential. More notably, the group was, to a man, young, with then-27-year-old Harri Sateri as the team’s elder statesman for much of the first 14 games.

“We didn’t have the veteran guys, and we had a lot of second-year players,” Kinnear said. “That’s a lot tougher, especially when you have expectations coming (into year two).”

Change was inevitable, of course. Before the Thunderbirds were completely out of the woods in their perilous 14-game opening act, the first difference-making change was the addition of noted pest Bobby Farnham, who had made a professional living being an opponent’s hindside pain.

“I believe grit is one of the things that wins in the long run. Bobby came in and gave us a lot of grit. That identity (is one) I think we had a lot of the year before.”

Ahead of a mid-November weekend series with Laval and Providence, Thunderbirds general manager Eric Joyce and Kinnear each saw a distinct need on the blue line, acquiring 23-year-old Ludwig Bystrom from the Texas Stars.

All the young Swede did was set career highs in every major offensive category despite playing in just 51 games for Springfield, tallying 26 points.

Not only did Bystrom embrace the challenge, but he refused to be knocked down despite playing through serious pain at the end of the season.

“You want to talk about grit? The guy played with two fractures in his feet from blocking shots,” Kinnear revealed. 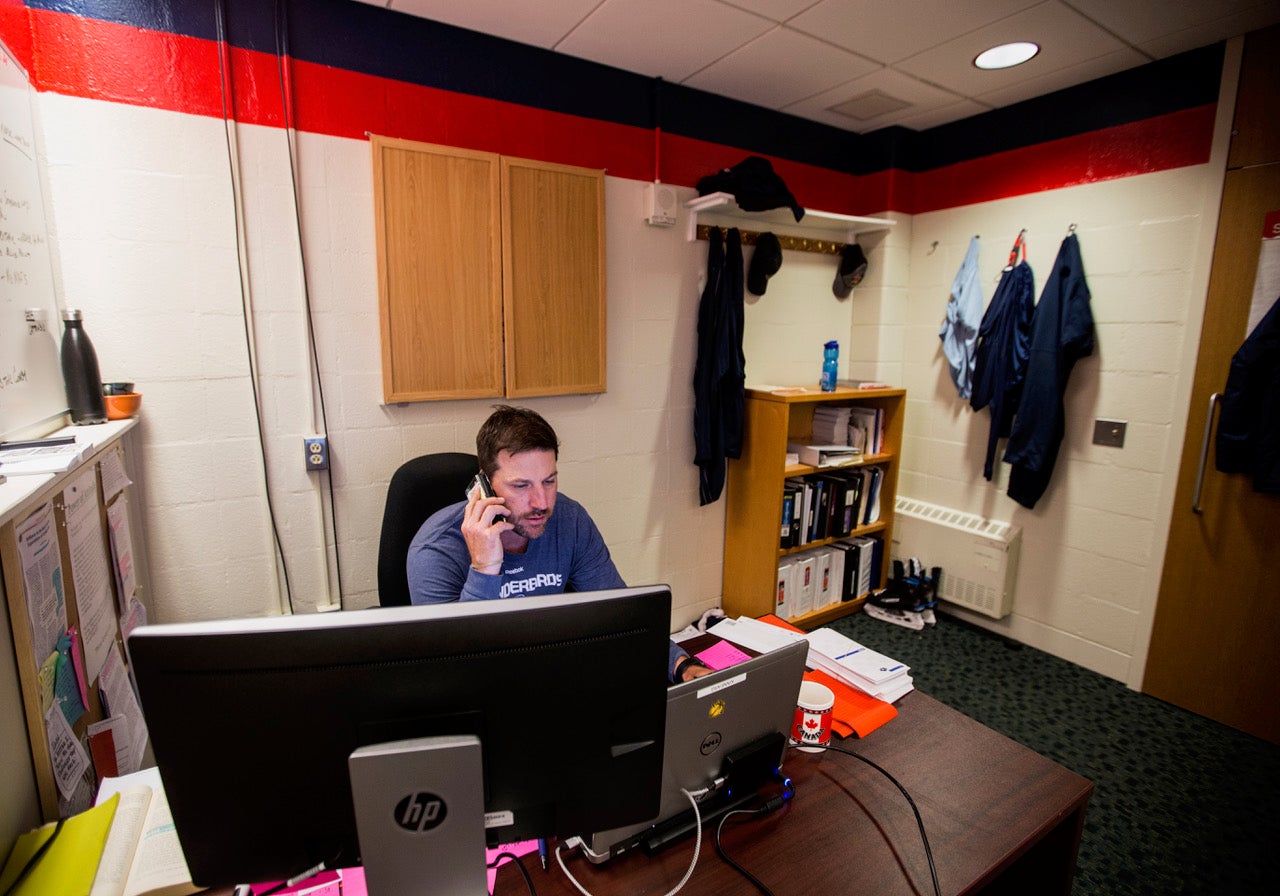 If Bystrom was the puck mover Springfield desperately coveted in the early season, then 34-year-old Calder Cup champion Max Fortunus was the all-too-necessary cog in the defensive end of the ice. In crossing the 1,000 professional games milestone this season, Fortunus seamlessly became a leader in a room largely comprised of players a decade younger.

“Max has played 1,000 games, but he’s one of the guys after practice shooting pucks, going out before and shooting pucks. After a game, he’s on the bike taking care of his body. You don’t play 1,000 games by accident.”

Then perhaps it was no accident to learn that Fortunus had also played with a foot fracture suffered from a blocked shot. However, Fortunus – and Farnham – each provided something else just as noticeable as strength and toughness: the ability to get the best out of your fellow teammate.

“(As a young player), you see those guys come to work every single day. For me, there’s no bigger disappointment as a teammate than letting your (fellow) teammate down, and if you’re not coming to work committed to blocking a shot or not ready to start the game, then you’re letting your teammate down.”

“Trust me,” Kinnear says, “watching those guys on a day-to-day basis, you don’t want to let (Bobby and Max) down. I think that’s what they brought to the table (on top of their play).”

The results showed from the moment Fortunus hit the ice for the first time on Nov. 15 – the Thunderbirds record soared over .500 with the veteran in their lineup.

“When we had leaders (like Fortunus) come in who had the experience at this level and had won at this level – it took us to another level,” Kinnear reflects.

A five-game winning streak in January got Springfield within earshot of playoffs, and following another hot stretch in March, the Thunderbirds found themselves back at .500 – 28-28-4-1. They had gone 26-17-3-1 since Bystrom’s first game in a Springfield sweater.

Not so coincidentally, Springfield’s resurgence closely mirrored the personal renaissance of Sateri, who saw his season begin on the wrong foot – 0-5-0 in his first five starts. After his first NHL stint in Florida for the Panthers, in which he picked up an NHL 2nd Star of the Week honor for Jan. 28 to Feb. 4, the experienced goaltender returned to Springfield with newfound confidence.

Sateri lost in regulation only four times in his final 24 games, and his stellar play propelled him into the top-6 in the AHL in both goals against average (2.30, 6th in AHL) and save percentage (.927%, 3rd).

Sateri earned his coach’s admiration upon his return to Springfield over Presidents Day weekend.

“There was zero letdown when he returned – a lot of times when a player gets sent down, there is a little bit of a letdown. He was a determined hockey player, and any confidence he was given, it was earned.”

While the Thunderbirds ran out of race track in their pursuit of a first-ever playoff berth, there is no reason to think the club could not take substantial growth steps in their third season. With a large crop of players entering their third pro season – among them Dryden Hunt, Thomas Schemitsch, Juho Lammiko and Jayce Hawryluk – the bench boss sees a bright future, but also understands experience alone cannot guarantee results.

“They learned a hard lesson that the second year is tough. There’s areas of their game that need to improve. The third year is a big year for you as a player and also as an organization. Both the NHL and AHL club have had positive steps, but ultimately, we’re not where we need to be. Nobody can be satisfied and we all want to paint a very positive picture, but it’s only positive if you come to work and not be satisfied at the previous year and always wanting more. As a staff I know we want more, and we expect our players throughout the organization to want even more.”