Periodically throughout the Springfield Thunderbirds’ 5th Anniversary season, “Voice of the Thunderbirds” Ryan Smith will inject some of his personal insights, analysis, and other opined, miscellaneous nuggets into a project that we’ll coin as “5 Ramblings w/ Ryan Smith.”

I’ll be the first one to admit that development camp and prospect tournaments are, by no means, a barometer of a player’s future productivity. It will never be a make-or-break situation if someone scores seven goals or takes seven penalties in a tournament of this type.

However, I think there is still a lot you can learn about a player’s tendencies, as well as guys who may have a bigger chip on their shoulder, for example.

So, with that, here are five ramblings of mine from the Blues’ prospect tournament showing in Traverse City, Mich.:

#1: The organization’s view of Joel Hofer is sky-high

I tend to believe that, so long as Jordan Binnington and Ville Husso remain healthy, the Springfield #1 goaltending spot will be veteran Charlie Lindgren’s to lose, and for good reason. Lindgren has been an AHL stalwart and minutes-eater with Montreal’s AHL affiliates dating back to the 2016-17 season. He has 137 AHL games under his belt, including three seasons of 33 or more games played. The save percentage and goals-against numbers are probably not where he would want them to be on a personal level, but by the same token, Laval has had their issues defensively as a unit over their brief tenure in the AHL to date. 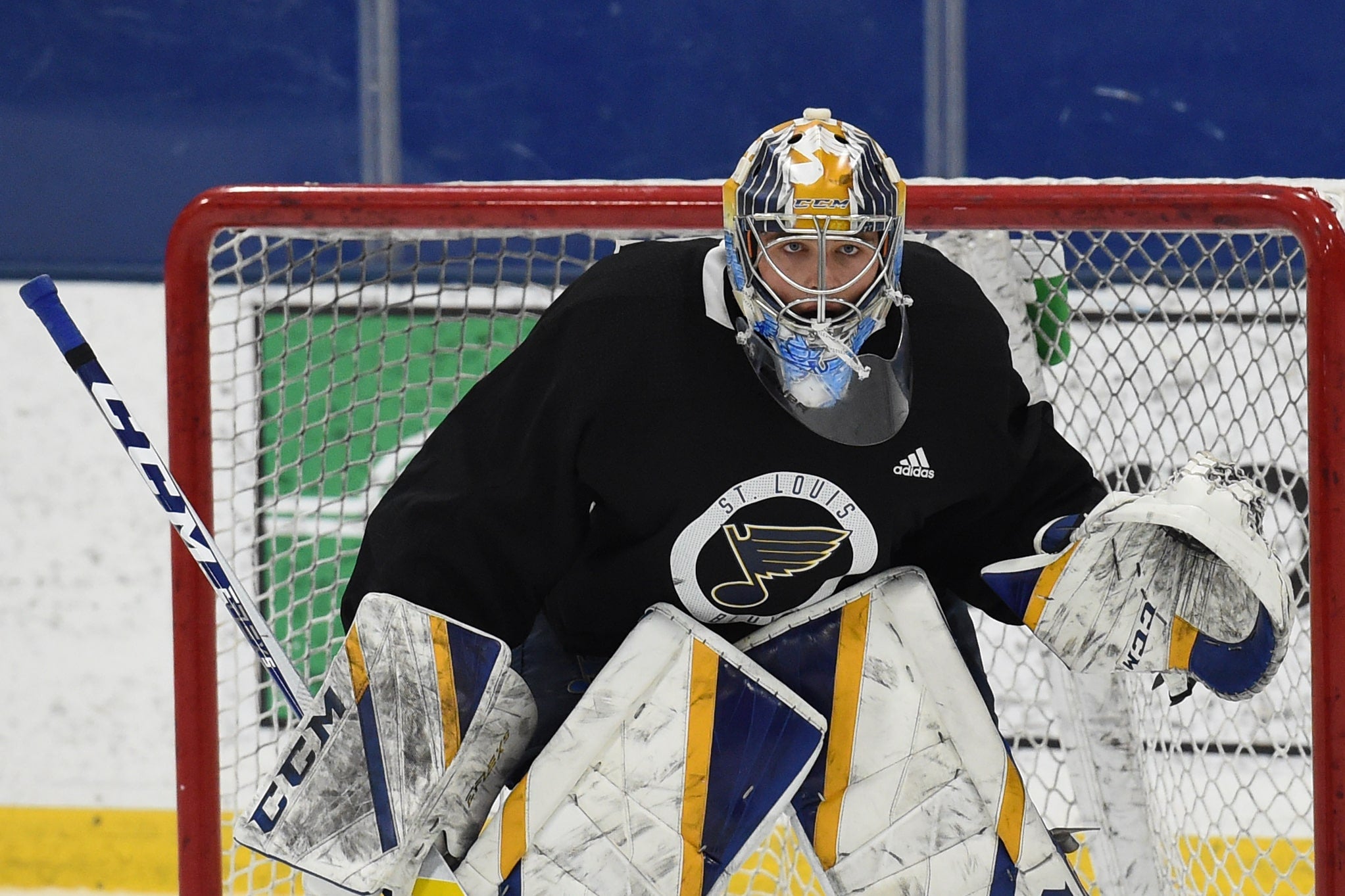 However, I will not be surprised in the slightest if 21-year-old Joel Hofer is something of a 1B to Lindgren in terms of goaltending shares. Blues Director of Player Development Tim Taylor candidly said in his press conference that Hofer looks bigger and stronger than he did at the end of last season in Utica. He even went far enough to say that he expected Hofer to be a number-one guy in Springfield and someone who can push for a job in St. Louis down the line. Now does that equate to Hofer and Lindgren splitting back-to-backs or one guy potentially playing 2/3rds of the games? Only time can tell. Nevertheless, a Lindgren-Hofer combination seems to be the thought process.

#2: Alexandrov & Toropchenko will be asked to take big strides

Two of the more intriguing names that GM Kevin McDonald and head coach Drew Bannister have spoken about many times are Nikita Alexandrov and Alexei Toropchenko. During the pandemic, each of them stayed back in Europe and, as a result, got reps playing in the Finnish Liiga and the KHL, respectively. Those two leagues are widely regarded as some of the toughest, most competitive in the world outside of North America. 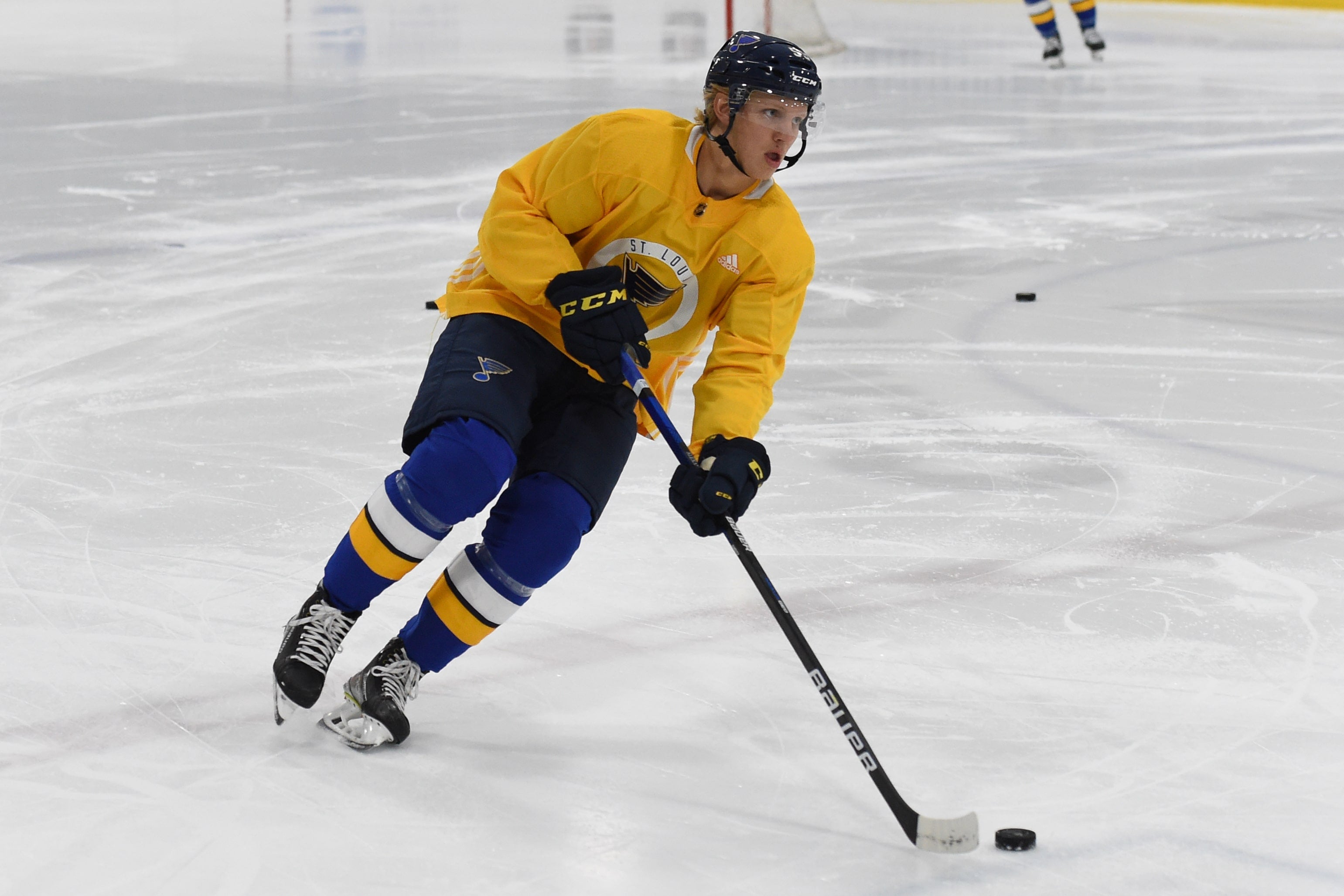 The early results proved positive for Alexandrov (in gold jersey), as he recorded five points in seven games in Utica to close the shortened season. This came after he finished with just nine points in 28 games with KooKoo in Finland, but as I stated before, playing in Liiga at age 20 is no easy task. 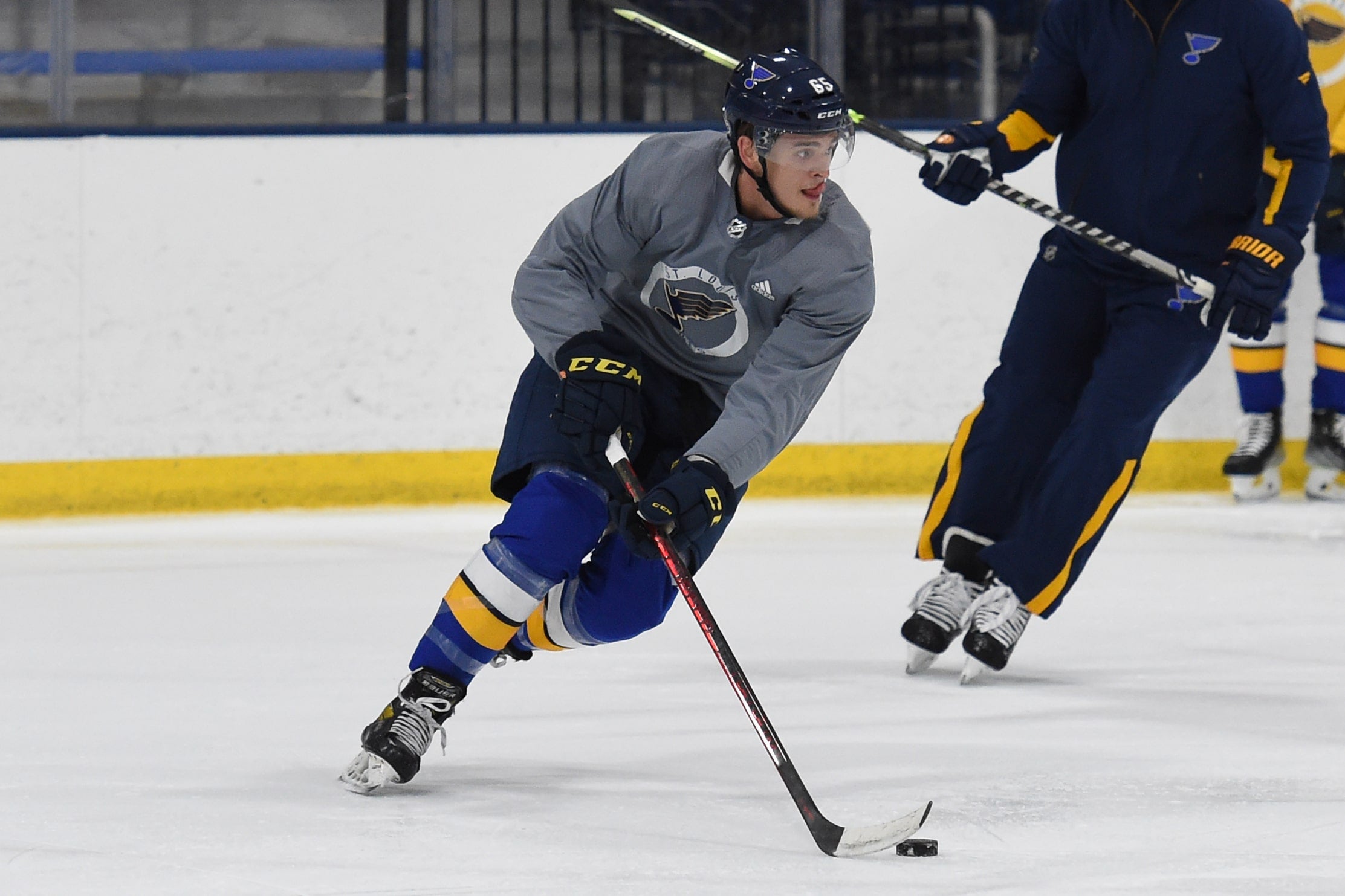 Toropchenko (in grey jersey) was very noticeable to me in Traverse City – he’s a big body at 6-foot-3 and 200 pounds, but his game is more skilled than physical. He’s also a very disciplined player, as he has never recorded more than 33 penalty minutes in a season in North America. Taylor even indicated the Blues’ hopes that Toropchenko would see some game action in St. Louis in the very near future, which speaks to their organizational view of the 22-year-old Russian. 45 games in the KHL certainly should have helped to grow his game, as the Russian league is often on par with the NHL from a talent perspective.

For the Thunderbirds to compete for a Calder Cup, young players like this pair will need to be key contributors. Such is the way for champions of recent years in the AHL.

#3: Look out for Hugh McGing

One of the few players in Traverse City that I, personally, have seen a lot of in the past is Hugh McGing. He’s a diminutive figure who won’t be imposing his size upon anyone, but at every level he has played, he has proven his ability to find the back of the net. He showed off his power play wrist shot against Detroit, and it is a shot I’ve seen McGing perfect dating back to his days with the USHL’s Cedar Rapids RoughRiders.

McGing scored 23 times with the Riders in 2015-16, but just as positive was his +32 rating. He has proven to be a responsible player in his collegiate career, too. He was a point-per-game player for almost his entire tenure at Western Michigan, including a 35-point season in 2019-20 as captain of the Broncos. 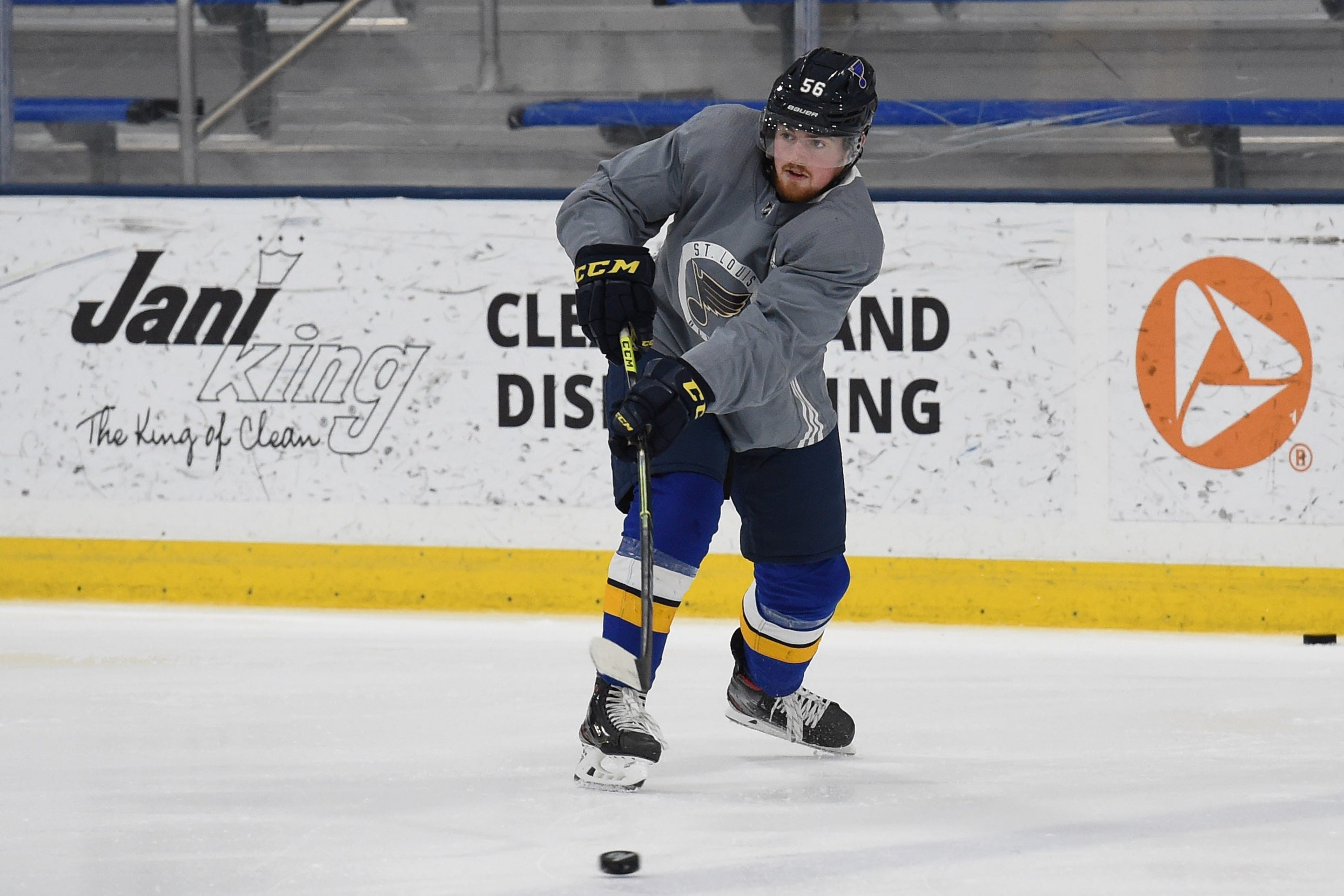 I would not put too much stock into McGing only registering four points in his first 23 AHL games. Once upon a time, Dryden Hunt went two months between goals as an AHL rookie, and we all saw what he grew to become. It would not shock me to see McGing take similar strides in 2021-22.

While he likely will be heading back to the Western Hockey League this season, the Blues’ 2020 first-round pick Jake Neighbours is a player to keep an eye on. One scout called him sturdier than a refrigerator, and watching him in Traverse City affirmed that sentiment for me. It seemed like every time someone tried to push Neighbours around yielded about as good a result as trying to dislodge a single brick from a wall. 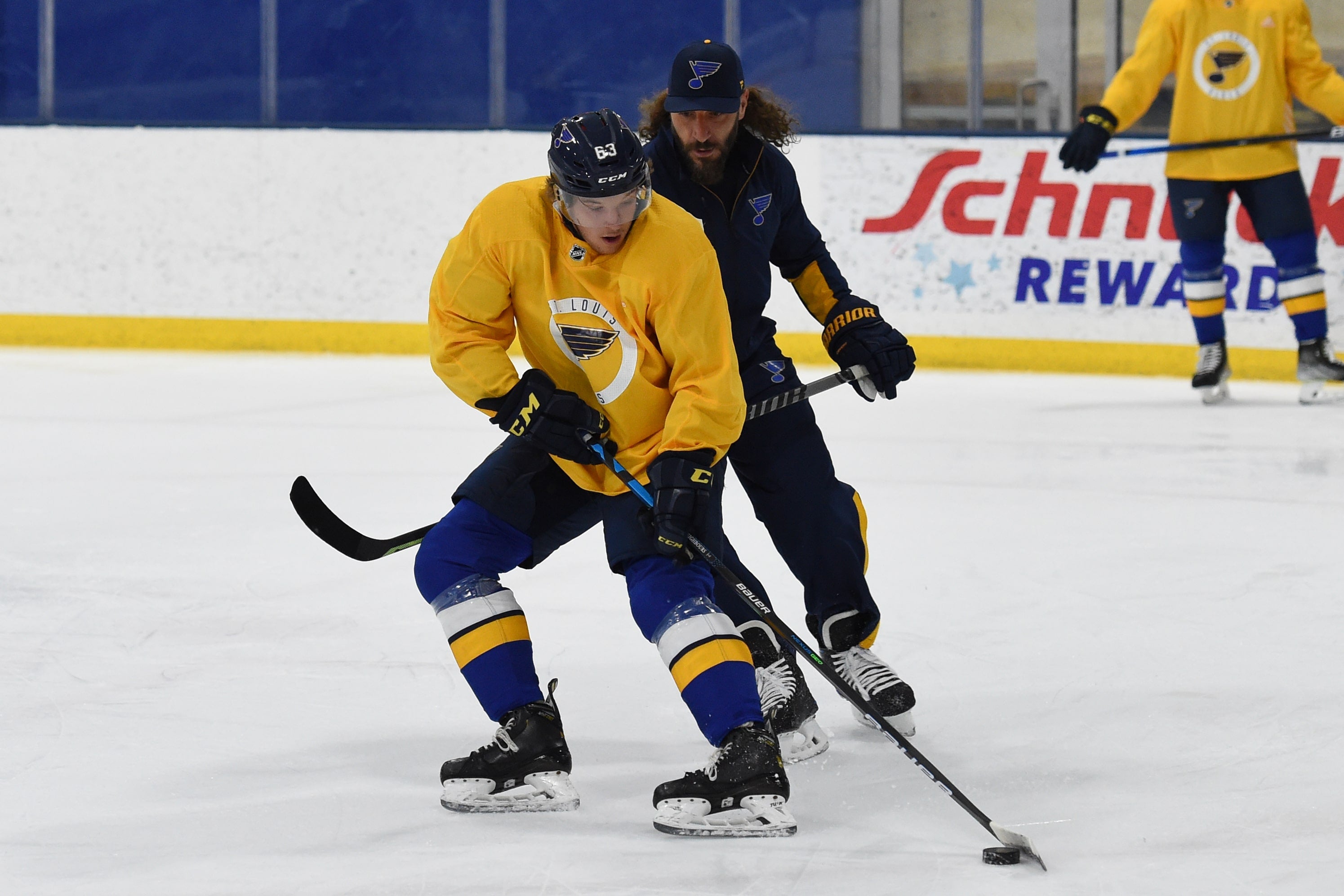 What I liked about Neighbours even more than his highly-skilled playmaking ability, though, was his feistiness. It seemed like every single time there was a dust-up after a whistle, he was in the middle of it. He seems to have a good knack for picking his moments to stir things up, as evidenced by relatively low penalty numbers in the WHL. Combine that with a lethal offensive game (103 points in his last 83 junior games) and you’ve got the recipe for a really strong competitor who seems to fit the mold as “a pain to play against.”

Should the Edmonton Oil Kings’ season end early enough, don’t be surprised to see Neighbours in St. Louis or Springfield late in the season and potentially in a playoff scenario.

#5: What else can be said about Scott Perunovich?

Neighbours was probably the most noticeable forward in Traverse City, but one quick glance at the game tape and it is undeniable that Scott Perunovich was, far and away, the best player on the ice. This is splendid news for St. Louis and Springfield fans considering the 23-year-old missed all of the 2020-21 season due to a shoulder injury and subsequent surgery.

The resume for Perunovich is already spectacular: back-to-back national championships with Minnesota-Duluth, three seasons of 29+ points in college, and the 2019-20 Hobey Baker Award as college hockey’s top player.

I don’t know if people understand how difficult it is to put up a point-per-game in NCAA hockey in this era, let alone to do it as a defenseman. Yet when I watch Perunovich play, I do not classify him as a “gambler” who takes many offensive chances from the blue line. He has an agility and a puckhandling savvy comparable to the likes of Torey Krug and Shayne Gostisbehere, but I also see some Matt Grzelcyk in how smart he is inside his own zone. 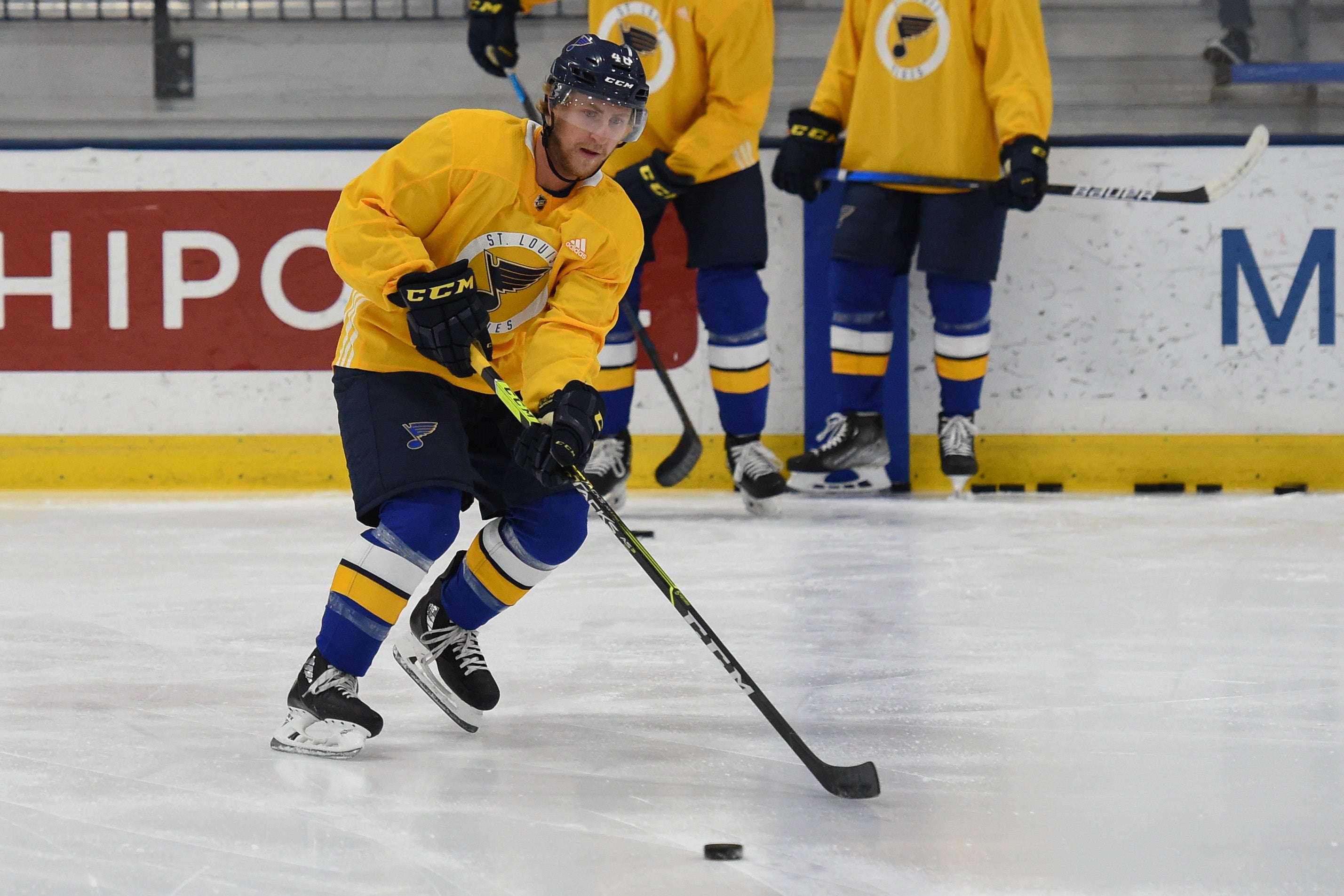 Where Perunovich really shines is quarterbacking a power play, and if he does not land on the Blues’ Opening Night roster, I would put him right near the top of the AHL in terms of best power play QBs – before he has even skated in one AHL game, mind you. The game slows down when the puck is on his stick, and he has such good feet in tight spaces. His innate ability to generate offense cannot be taught easily, and if he spends time in Springfield, then T-Birds fans should cherish every second of it, because he has all the makings of an NHL star, in my opinion.