With just 46 days separating the T-Birds from regular season AHL hockey at the time of this publishing, “Voice of the T-Birds” Ryan Smith has left the mail slot open and will answer some of your most frequently asked or unique questions heading into the 2019-20 season.

Well, T-Birds fans, I don’t know about you, but I know that I have reached the point of the summer where I have the itch for hockey to return. When the Thunderdome is rocking, I (and head coach Geordie Kinnear) believe that this can be one of the most intimidating buildings for an opponent in the AHL.

There is understandable excitement with more than a dozen T-Birds players from last season returning to the Panthers/Thunderbirds franchise, including three of the top four point producers (Anthony Greco, Paul Thompson, Dryden Hunt) and a goaltender with the AHL’s top save percentage from a year ago (Chris Driedger). The Atlantic Division promises to be a fierce competition – what else is new? – but the Thunderbirds showed last season that they were more than capable of hanging with their rivals.

Without further ado, let’s dive into the mailbag:

What do you think will be the toughest stretch of the T-Birds season?

As we have seen in the AHL, what appears to be the toughest stretch on paper in August could very well turn into winnable games if an NHL club endures injuries or an AHL club sees standout players earn their way up to the “show.” An example of this last year for the Thunderbirds came when they were tasked with making the border-crossing trek to Laval in just the season’s third weekend. The Rocket had put together a strong start to the season on the heels of a tough 2017-18 campaign. 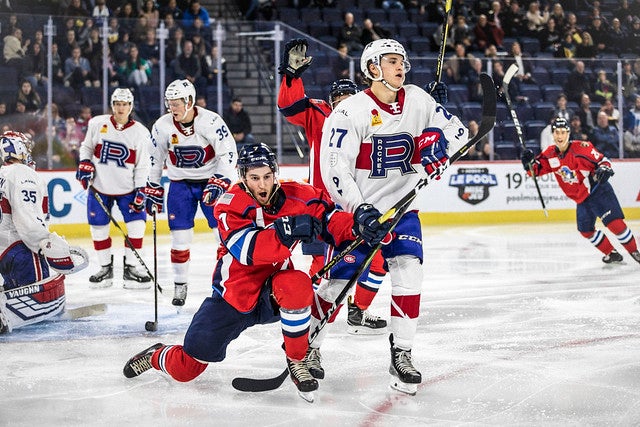 regulation wins. Those two “W’s” were part of a franchise-record nine-game point streak to start the season 7-0-0-2.

On the surface, the first stretch chronologically that I view as a stiff challenge comes in November, where the T-Birds play six games in the span of 11 nights from Nov. 6 to Nov. 16. Five of those contests are on the road, where Springfield had a record below .500 in each of its first three seasons. Making matters a little more treacherous is the fact that Springfield will play two School Day Games – one in Bridgeport on Nov. 6 and one in Springfield on Nov. 13 – during that period, and that unusual timing means that players will need to make sure they are well adjusted to “being awake” to play at 10:30 a.m. The Thunderbirds also need to shake off some demons in Bridgeport, where they have not won since February of 2018.

After the morning game with the Sound Tigers, the T-Birds hop on a plane the very next day to head to Charlotte for a pair of games on Friday and Saturday against the defending Calder Cup champions. Some view the Checkers as a far different team than their Cup-winning squad, and on some level, that is valid. Head coach Mike Vellucci moved on to take the same position with the Wilkes-Barre/Scranton Penguins. Forwards Zack Nastasiuk, Tomas Jurco, Aleksi Saarela, and Nick Schilkey have moved on, as have defensemen Trevor Carrick, Dennis Robertson, and Josiah Didier. Young star Martin Necas is expected to carve out a roster spot in Carolina.

Despite all of those changes, I still hold the belief that until a champion is dethroned, they are always dangerous, and the Checkers proved that their home ice is also among the toughest in the AHL, with Springfield winning just once at the Bojangles Coliseum in the last two seasons.

From Charlotte, the Thunderbirds return for their own School Day Game against the Phantoms, one of the few road teams that seem to thrive on playing in the Thunderdome. Lehigh Valley is 7-2-0-0 in the past three years in Springfield.

Once again, the Thunderbirds will have little time to rest before embarking on trips to Wilkes-Barre and Binghamton on Nov. 15-16. I expect both of those non-playoff teams from last season to be improved squads, especially the Penguins (via the addition of Vellucci). The Thunderbirds can ill-afford to overlook them.

Which team will be the biggest threat to the T-Birds on the schedule?

I will keep this question to within the division, as the Thunderbirds certainly will see its fair share of Providence (14 times), Bridgeport (12 times), and Hartford (10 times). Of those three teams, I have a potentially surprising answer here – the Wolf Pack.

I say that for a couple of different reasons. First off, even though the Wolf Pack 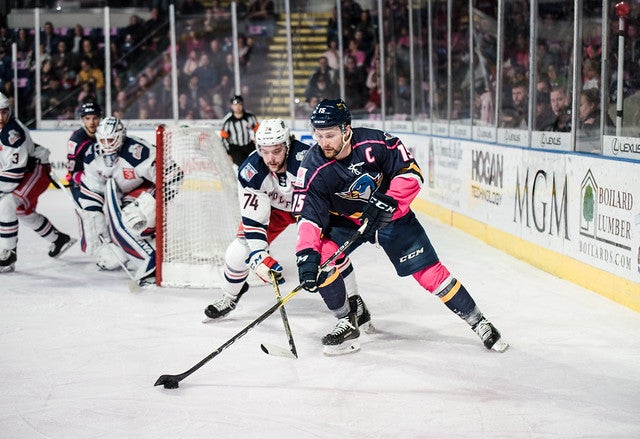 have been hanging out near the cellar of the Atlantic the past three seasons, that has not stopped them from putting up many a tough battle against Springfield in the I-91 rivalry. I think Springfield’s record really should be better than the 20-7-3-2 mark they have posted against the Pack since their inaugural season.

I emphasize all of that because, on the surface, this year’s Wolf Pack team should be by far the most competitive they have sported in the Thunderbirds’ brief history in the league. Veteran acquisitions Danny O’Regan (48 pts w/ ROC last year) and, of course, Harry Zolnierczyk (51 pts w/ SPR last year) have provided a nice jolt to the Hartford attack. With the Rangers selecting Kaapo Kakko second overall in the NHL Draft and signing Artemi Panarin in free agency, that could very well mean a lengthy stay in the AHL for Vinni Lettieri, who has shown a propensity for hurting the Thunderbirds on more than one occasion.

While John Gilmour has moved on from the Rangers/Wolf Pack franchise, the Hartford blue line still has a couple of nice pieces in veteran Vincent LoVerde and acquisition Darren Raddysh from last season.

Most importantly for Hartford, their goaltending should also be in a much better position than years past, with former Calder Cup champion Tom McCollum arriving from Milwaukee and highly touted prospect Igor Shestyorkin potentially coming to North America after posting a 1.11 goals-against average in the KHL last season in 28 games (not a misprint).

The Rangers have one of the most talented young prospect pipelines in the NHL and AHL, so I think the days of Springfield having a distinct edge over the Wolf Pack may be numbered. The I-91 rivalry should be fiercer than ever in 2019-20.

What do you believe would be the most foreseeable event – a Winter Classic style game or an Eastern States Coliseum game?

I love when people let their imaginations run wild for these types of things – you’re supposed to dream! On a purely personal level, I would LOVE to call a game in either of these two settings. The one time I ever called an outdoor game in college, I shivered my way through it and wished I had binoculars, but it is hockey in its purest form. Whether that would be in Hartford, Amherst, Providence, or wherever – I hope that I call more outdoor games before all is said and done.

The Eastern States Coliseum is a building that gave me a very unique feeling the very first time I walked inside of it at the Big E in 2016. It was like stepping into a time machine and being transported back to a time when games were enjoyed by folks who had just gotten out of their blue-collar jobs and came to have a hot dog and a beverage while taking in old-time hockey, with no phones or electronics to sidetrack them. I had many fans and co-workers tell me about their younger days going to games at the Eastern States, and as someone who absolutely loves older buildings with the buzzword “character,” it resonated with me instantly. Even if I just had a tiny gondola up at the top of the catwalk in that building, it would be an absolute privilege to call a game in that “barn,” which these days is an accurate word choice!

However, I will make it very clear that not only do I have no inside information on either of these events coming to fruition, but I also have no idea of the scope of cost and logistics that would be required to put either of these events into motion. So, let me join all of you in holding out hope that such a day could come in the future!

Do you think this year’s team has playoff potential?

Many of you probably think I would answer “yes” to this question whether I truly believed it or not. However, this year, I say with 100% authentic conviction that I believe this team is set up to be right in the playoff hunt all year. They will need to be at their best almost start-to-finish to make it because of how tight this division seems to be, but I think the capability is there.

The acquisitions of Tommy Cross and Ethan Prow on the blue line are absolutely massive for this team.

Their defensive acumen and ability to contribute offensively should take some pressure off the goaltenders, and while I do not always like to fixate on one player’s impact on a 20-member team, it is hard to sidestep the fact that Cross has never missed the Calder Cup playoffs in his pro career, which dates back to 2012-13. I would put Thompson and Cross up against almost any two teammates in the AHL for pure leadership – each of them has worn a letter the last three seasons. Cross has captain’s experience for three years in Providence and, before that, during his senior year collegiately at Boston College (where he won his second National Championship with the “C” on his sweater, mind you.) 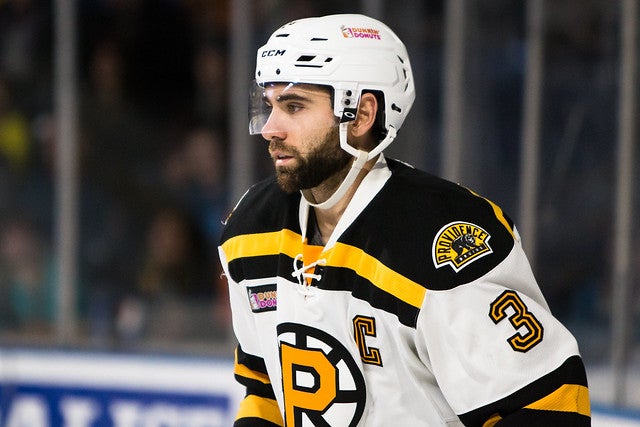 The Florida Panthers’ jam-packed July 1 moves should also produce a great trickle-down to the T-Birds. Besides Sergei Bobrovsky’s enormous presence between the pipes, Florida was busy in front of their goaltender with Brett Connolly and Noel Acciari securing two forward spots and Anton Stralman locking down another defense position. If Florida can maintain relatively good health, that means that some very strong NHL prospects may need to spend time in Springfield – the likes of potentially Dryden Hunt, Owen Tippett, Ian McCoshen, and Riley Stillman to name a few. Couple that with Aleksi Heponiemi’s arrival to North America, and this has all the makings of being another team of weapons.

I think Prow can pick up Jacob MacDonald’s slack on the power play, and Heponiemi has some of the most unique skills I have seen from a smaller player in years. Because of those two, I think the Springfield power play could rival its league-best unit from 2018-19, especially with Thompson, Hunt, and Greco as the goal-scoring finishers. If the penalty kill can improve and the goaltenders (particularly Driedger) can make the timely saves, this team has the making of having a top-10 or 15 special teams unit in both disciplines.

To sum up, if the Panthers and T-Birds can avoid debilitating injuries and play up to their potentials, hockey could very well extend past Easter in Sunrise and Springfield this spring.

How are the tie-square combos looking for 19-20?

This one gave me a great chuckle – anyone who has seen my Twitter knows I have an addiction to tie and pocket square styles, and I can say at the time of this publishing that I have since added more to the rotation, so stay tuned! 46 days to go – I cannot wait to see many of you back in the Thunderdome. For now, though, enjoy the rest of your summers!

A grand total of 3 people may even care about this. But we’re going to play a thread-based game: how many suit/tie/pocket square combos can I have?