Thunderbirds captain Paul Thompson has had no shortage of inspiration and motivation throughout his hockey career. Arriving at the University of New Hampshire and going undrafted to the NHL, he has long worn the chip on the shoulder of the undrafted player, to the tune of a Hobey Baker Finalist distinction and Hockey East player of the year honor in 2011.

Along that path, he has always been a source of leadership and mentorship, having worn a letter in the AHL during each of his last four years, including the Thunderbirds “C” since October of 2018.

Never afraid to fight his own battles on the ice, this past year, Thompson instead found himself and his family on the perimeter of a battle nobody could foresee.

-- (Below, click the play button to hear Paul Thompson on this week's episode of T-Birds Talk - to hear the full episode, click here)

Angela Augusta, much like her older cousin Paul, took to sports from an early age in their native New Hampshire. That, in turn, led her to a four-year hockey journey at picturesque Salve Regina University in Newport, Rhode Island. From 2015-19, she skated in almost more than 90 games while earning her degree along the way, in a fashion not unlike thousands of student-athletes nationwide.

Just a week after donning the graduation cap and gown, though, Augusta’s and Thompson’s lives would forever be changed in a most unexpected and unfair way.

After not feeling like herself for a considerable period of time, Augusta went in to get checked up by doctors, after which time it was discovered that a mass above Augusta’s left collar bone was actually Stage 2b Hodgkin’s Lymphoma. According to Augusta, she had experienced the symptoms throughout her senior season at Salve Regina, dating back as early as July 2018, nearly a full year before her diagnosis.

Hodgkin’s Lymphoma in itself is an affliction not altogether uncommon in young men and women aged 18-23. Just 22 years of age at the time of her diagnosis, Augusta’s life purpose was about to take on a whole new meaning.

Yet in spite of what could easily have been viewed as a roadblock in his cousin’s life, Thompson had a different reaction to the news. 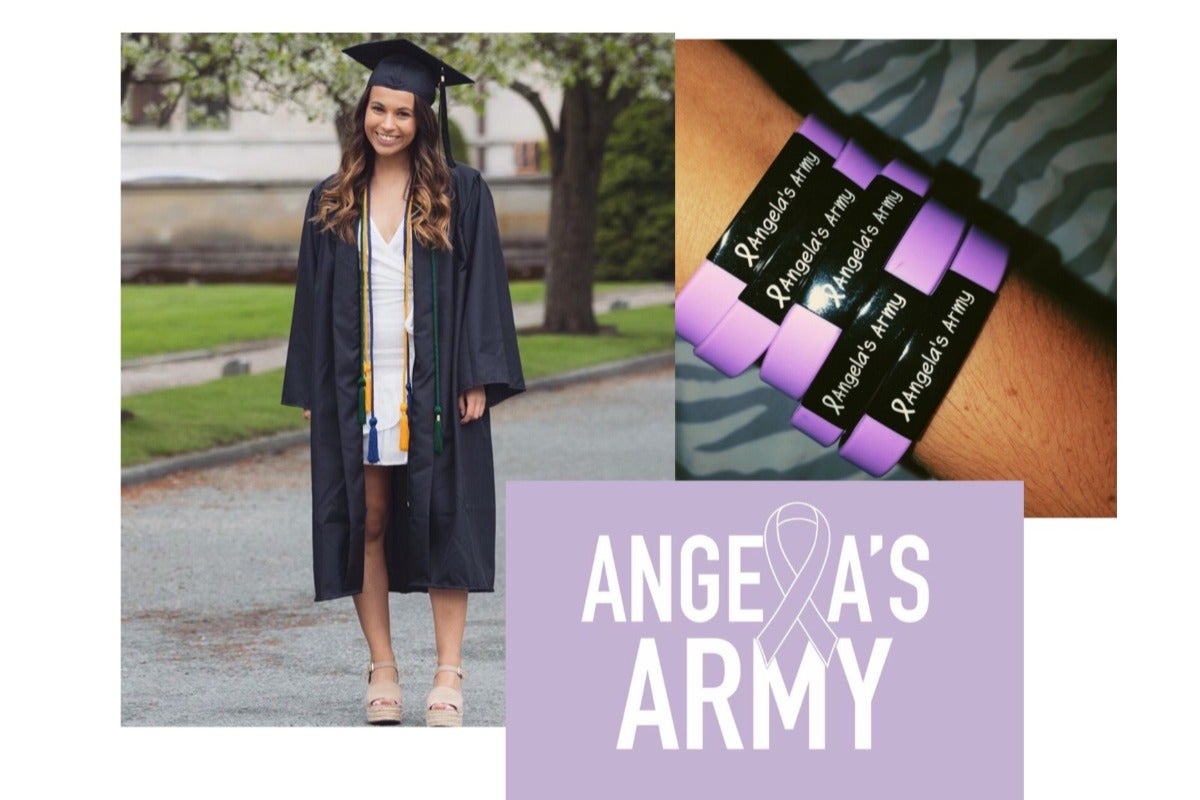 “Growing up, (Angela’s) always been cheerful – a beautiful young girl, a strong kid. Once my mom told me the news, the first thing I said was ‘she’s a strong person. She’s going to get through it.’ I know she has a great family & support system throughout. I know she’ll be alright.”

And Angela – to the immense pride of her cousin and family – had another idea of how she could turn one of the biggest negatives in her life into a positive that stretched far beyond the tree of her own family. It was an idea born during her visits to Dana Farber Cancer Institute in Boston to receive chemotherapy treatment.

“Throughout my chemotherapy treatments; sweatshirts, winter beanies, fuzzy socks, blankets and tea made me feel a sense of ease and comfort,” Augusta wrote on her official GoFundMe page.

Having battled through her own treatments and leaning on her support system and the gifts she received, Augusta established her own fund, simply titled “Angela’s Army.”

“I call it a foundation to help other people who are going through what she’s going through (in the chemotherapy process). She’s a strong young person, and it’s sad because it’s a disease that can really affect anyone and come out of nowhere,” Thompson says.

With over $3,000 raised as of Nov. 19 on the “Angela’s Army” page, it will not be long before Augusta’s selfless attitude in the face of unspeakable hardship will be paid forward to others like her.

“I can’t imagine the situation (she’s been going through), but (Angela’s Army) and the care packages show the character of her and her family to be able to think of others and say, ‘hey, we’re going through this too. These are things that helped me feel better in the process. Let’s do good with this and put these packages together for other people going through the same thing,’” Thompson proudly states.

Augusta’s alma mater, Salve Regina, has been a constant beacon of support, with friends and teammates participating in Angela’s name at the school’s relay for life this September, in addition to “Angela’s Army” merchandise being sold at various SRU sporting events.

One of Thompson’s own teammates, Jake Massie - a former New Hampshire prep school athlete at Kimball Union Academy - was sporting an Angela’s Army wristband and an “Angela’s Army” placard as the Thunderbirds built their tunnel walls with tributes to their “fighters” this week.

Perhaps the happiest postscript came in Augusta’s update on her @AngelasArmy Instagram page earlier this month on Nov. 9. Within that post, she wrote:

Well as of yesterday I finished my second to last chemo treatment! Words cannot begin to explain how excited I am that this chapter of my life will soon be coming to an end on November 22nd. I cannot express how grateful I am for all of the support and love this second go at my fundraiser has given me. This chapter of my life ending only means the next one is starting & and I’m so lucky Angela’s Army is the title of it. I always knew after diagnosis, during my chemotherapy and hospital admissions there would be a light at the end of it all. And it’s all thanks to you guys. So I remind you all to remain kind and be good to one another. With all my love, Angela. 💜 #StrongerInNumbers

Saturday’s Hockey Fights Cancer night game will be raising funds via the postgame specialty jersey auction to benefit numerous local cancer charities. Paul Thompson’s #15 jersey will be auctioned off for Angela’s Army in support of his cousin’s battle and her selfless contributions to fellow cancer fighters.