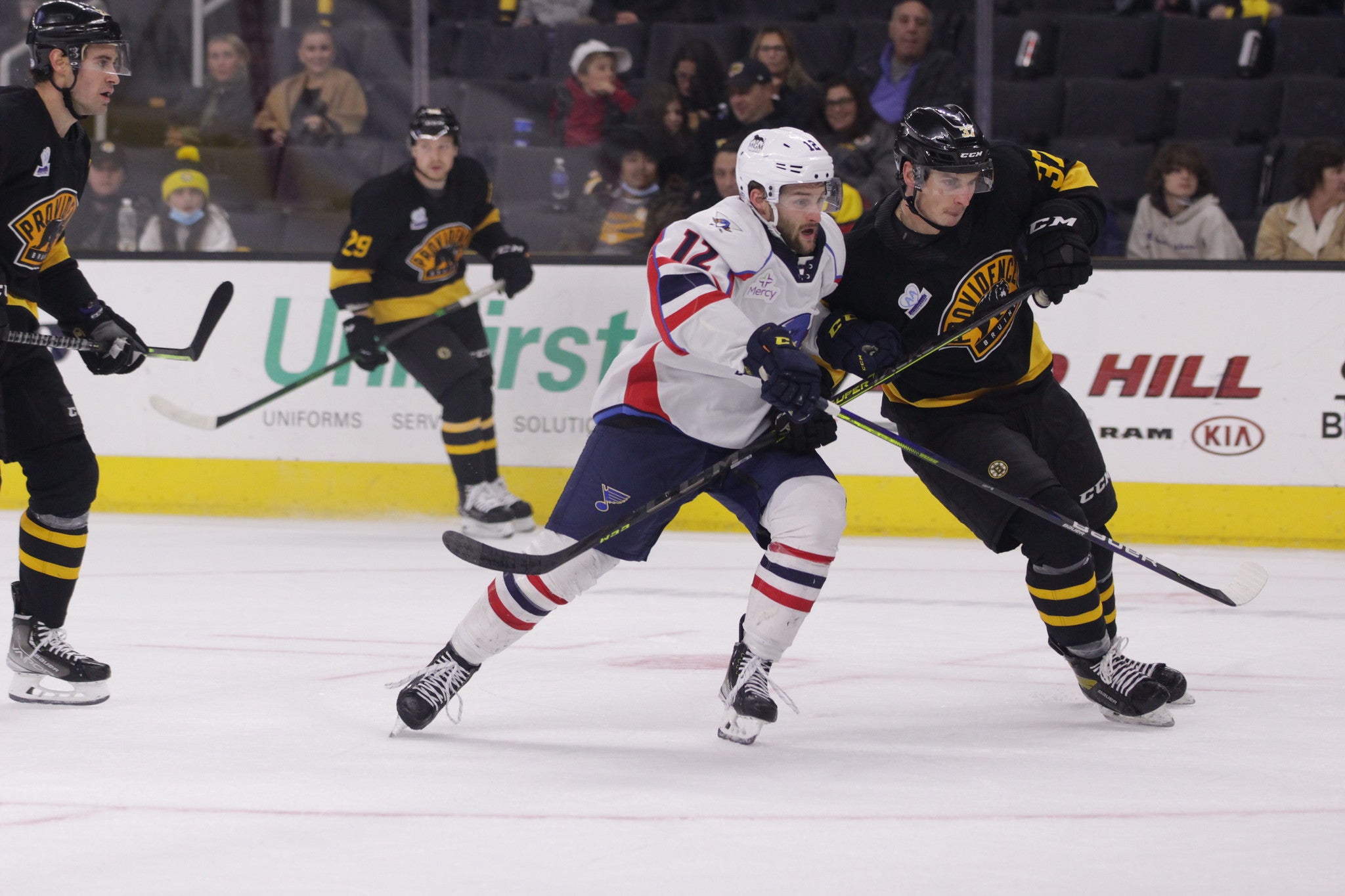 PROVIDENCE, R.I. – The Springfield Thunderbirds (8-1-2-0) rebounded from their first regulation loss of the season with a resounding 4-1 win over the Providence Bruins (4-3-1-1) inside the Dunkin' Donuts Center on Wednesday night.

Making his fourth start in the T-Birds' last five games, Charlie Lindgren was stellar in the opening period for Springfield, denying a dozen Bruins shot attempts, including a handful of chances on the game's initial power play for Providence.

Kyle Keyser had been matching Lindgren shot for shot, and like the T-Birds starter, Keyser also helped the Bruins kill off Springfield's first man-advantage chance in the later stages of the frame. However, the T-Birds broke through at 5-on-5 with just 1:03 left on the clock as Hugh McGing set himself up outside Keyser's crease and deflected a Josh Wesley snapper past the Bruins netminder to give Springfield the 1-0 lead at the first intermission. Alexey Toropchenko picked up a secondary assist on McGing's first goal as a T-Bird.

Providence showed plenty of bite back in the early stages of the second, registering the first nine shots in the middle period, including a tying goal from Urho Vaakanainen at the 4:36 mark of the middle stanza, when he beat Lindgren from the right circle on a wrist shot to the short side.

In need of a momentum changer, the Thunderbirds' power play delivered one past the midpoint of the period. With almost every player on the ice locked in a fierce battle along the left wing boards, Logan Brown and Nathan Walker eventually picked the puck off the wall and slid it into the middle of the ice, where Sam Anas crept down the center lane and unleashed a wrist shot over the glove of Keyser to give Springfield the 2-1 lead at 10:26.

Anas was far from finished, though, and just 4:11 later, he added to the lead, first by dancing to the bottom of the left-wing circle to get a close-in chance on Keyser. While the Bruins' netminder fended off the first attempt, Anas followed the miss to the end wall before banking in a second chance off Keyser's leg to extend the lead to 3-1.

Anas nearly had a natural hat trick as the third period began, but Keyser made an incredible diving left-arm save to keep the T-Birds' winger from a three-goal night. At the other end, Lindgren kept up his phenomenal performance with 22 saves over the final two periods en route to the victory. The netminder finished the night with 34 saves.

Walker capped off the Thunderbirds' prolific win with a breakaway forehander into the top shelf over Keyser's stick at 11:49 of the final period to round out the scoring in the 4-1 game. Scott Perunovich extended his team-record point streak to 10 consecutive games with a helper, and Brown added his second assist of the game on Walker's second goal of the season.

Following the mid-week duel with the Bruins, the Thunderbirds return home on Friday for a 7:05 p.m. matchup with the Hartford Wolf Pack inside the MassMutual Center.