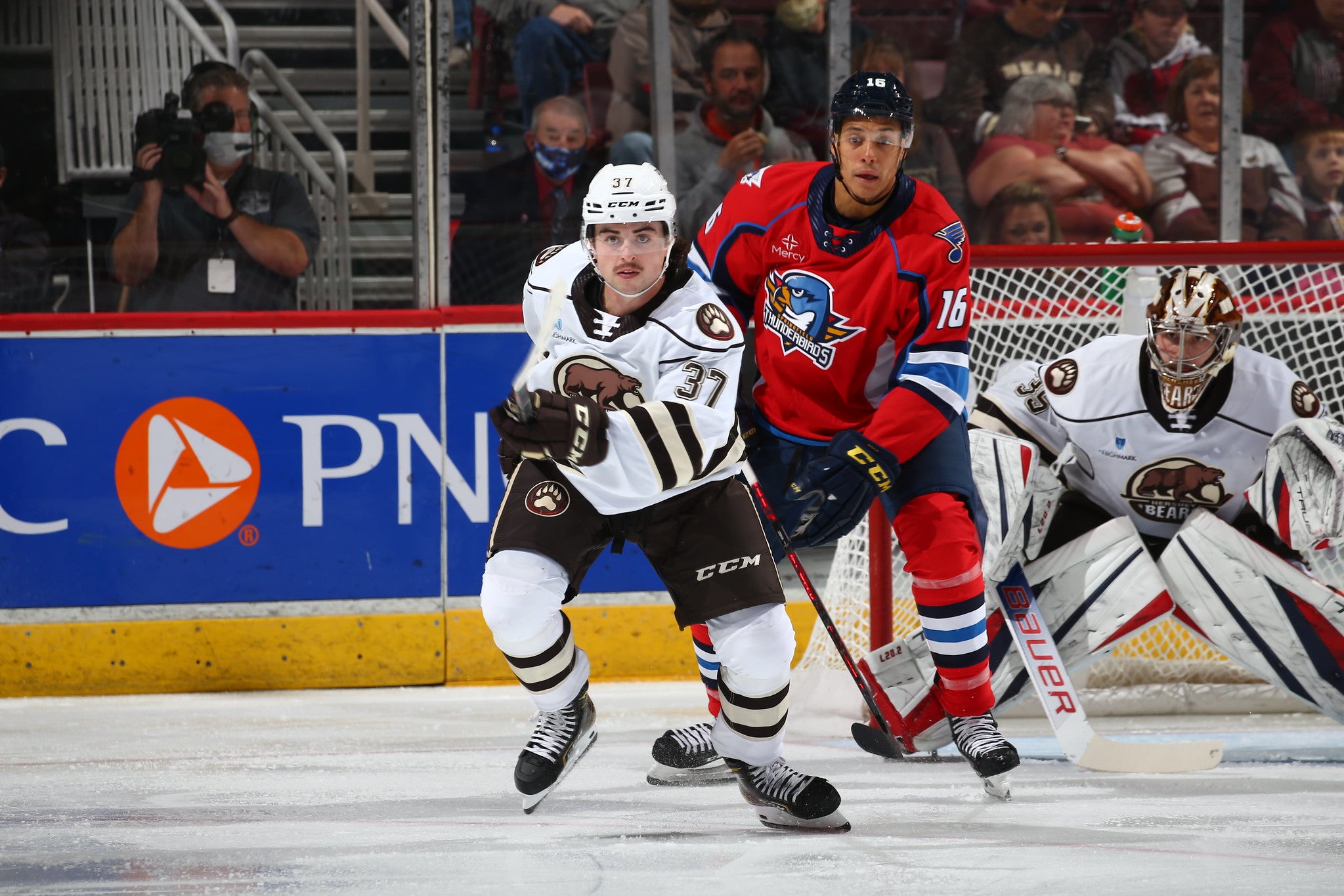 HERSHEY, Pa. – The Springfield Thunderbirds (7-1-2-0) saw their nine-game point streak come to an end in a 5-3 defeat at the hands of the Hershey Bears (5-2-2-1) on Sunday afternoon at the Giant Center.

Unlike a night ago, the offense did not come as easily for the T-Birds in the opening period on Sunday, as Zach Fucale and the Bears defense fended off parts of two Springfield power plays in the first, with the Hershey netminder stopping all 10 shots that came into his crease.

After a scoreless opening half of the frame, the Bears finally broke the ice at the 13:52 mark on the power play when former T-Bird Mike Sgarbossa picked up his own rebound from a left-point shot and deposited it past a fallen Charlie Lindgren to give Hershey a 1-0 lead.

1:04 later, a breakdown in the neutral zone from Springfield gave Joe Snively a breakaway, and the Bears forward beat Lindgren on the backhand to extend the lead to 2-0 after the opening period.

The response would be swift for the T-Birds in the second, however, beginning with a spinning left-circle shot by MacKenzie MacEachern that ticked off Dakota Joshua and past Fucale to cut the lead to 2-1 at the 11:05 mark of period two. Springfield's power play then deadlocked the score at 14:56 as Nathan Todd took a drop pass in the slot from Matthew Peca and ripped a wrist shot off the leg of a Hershey defender before it glanced into the net. Scott Perunovich picked up the secondary helper and extended his point streak to a T-Birds' team-record nine consecutive games.

It appeared the Thunderbirds had good luck going their way early in the third when Logan Brown broke the tie with a power play goal at 2:39 to give Springfield its first lead 3-2. It was a fortuitous bounce for Brown, as Nolan Stevens' initial shot from the slot deflected off a stick, then off of Fucale's glove before sitting right in the crease for Brown to jam into the empty net on the backhand. The goal was Brown's second in as many games.

However, the night was not meant to be for the T-Birds, as Kale Kessy tied the game on an odd-man rush at 5:06, 3-3. A late Hershey power play spelled the T-Birds' doom when Snively picked up another fortunate hop off the shin pads of a T-Birds shot block and beat Lindgren with just 3:09 to play. Snively added an empty-netter for the hat trick and the 5-3 win for the Bears.

It was the first time all season that the Thunderbirds fell in regulation time. Their record sits at 7-1-2-0 before they next visit the Providence Bruins on Wednesday night at 7:05 p.m. at the Dunkin' Donuts Center.