Bitten & His "Army" Have Special Inspiration for Hockey Fights Cancer

Motivation to show up to work day in and day out comes in different forms. For some, it’s living up to a salary and job responsibilities. For others, it’s the desire to keep progressing and taking the next steps in a career.

Then there are those whose motivation comes from somewhere much deeper.

Will Bitten has quickly made his mark as a fan favorite since being acquired by the St. Louis Blues organization from the Minnesota Wild shortly after Christmas in 2021. The rugged, speedy, and feisty winger was Springfield’s top point producer in the postseason as the Thunderbirds flew all the way to the Calder Cup Finals.

As he continues his push to receive his first NHL call-up, Bitten never forgets one man who shaped his life in a profound way.

Martin Piché grew up in Montreal, about a 90-minute drive away from his cousin Will’s hometown of Ottawa. Although older than Will by almost a decade, Martin and his younger relative built an instant connection.

“We had a special bond,” Bitten recalls. “I actually lived with Martin and (my aunt and uncle) for two whole summers. We enjoyed our (family) dinners, and he really enjoyed playing cards and loved a good glass of wine.”

While professional hockey was not in Martin’s life plans, a different type of journey awaited him in the world of engineering as he was working through the age-old stress of preparing for exams in the spring of 2014.

“One morning he was studying, and he told his dad that his head was bothering him and that he didn’t feel right,” Bitten said.

As most people could relate, Martin and his family thought that the stress of schooling could have been at the root of his malady. Then came May 11 of that year.

“That’s when they found the tumor in his brain.”

Martin Piché, a healthy 25-year-old man, was diagnosed with terminal brain cancer. At the time of his diagnosis, doctors gave him a timeline of three to four years to live.

Defying the odds, Piché attacked his diagnosis head-on and got to see his cousin Will begin his professional career in 2018 and became part of Bitten’s daily life.

“Every (game day), he would text me afterward. He was always watching, which I thought was really cool. I was always waiting for his feedback.”

In 2019, Will, along with brother Sam Bitten, took it upon themselves to start something bigger than themselves, establishing “Bitsy’s Army,” a fundraising campaign to benefit the Brain Tumour Foundation of Canada.

Sam’s description of Bitsy’s Army states “I decided to launch Bitsy’s Army so Martin can see how much he means to not only myself and our family but to fight back against brain cancer the same way he has since he was diagnosed.”

As Will was progressing through the shortened 2020-21 AHL season, however, there was a change that he could sense and not avoid.

“After a couple of games of not having him text me, I knew something was wrong.”

Bitten found the time to visit Martin, but the reality of the situation was ever-present.

“When I visited, he was not the same person,” Bitten recounts, “but seeing him battle motivated me.”

Six years and almost eight months after the day he was told he had three-to-four years to live, Martin Piché passed away on January 8, 2021. He was 31 years old.

Those years have provided Bitten with an emotional but beneficial motivation for his own career and life.

“Seeing the battle meant so much. Some days you wake up, and maybe you do not want to come to the rink as badly (as usual). But (Martin’s courage) gives me motivation in the morning,” Bitten says. “I’m playing a sport as my job. I’m so thankful and lucky to do that, and I’m sure there are a lot of people who would love to be in my shoes.” 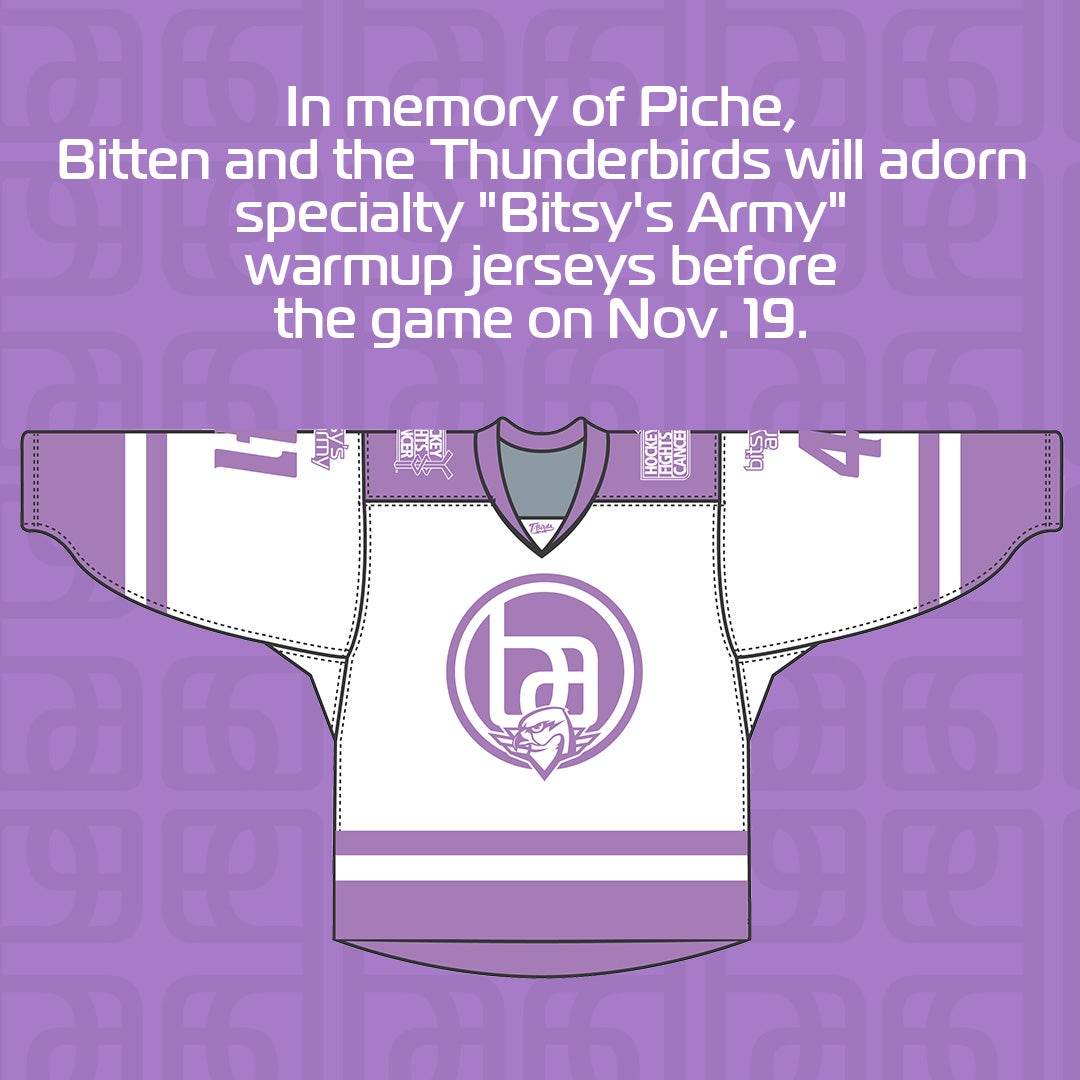 In memory of Piché, Bitten and the Thunderbirds are teaming up to extend Bitsy’s Army into the United States. A fundraising page for American donors can be found here.  Fans in Canada who would like to contribute can do so by clicking here.

A special line of Bitsy’s Army merchandise will be made available for purchase, with proceeds benefiting Bitsy’s Army. The T-Birds will also wear special lavender jerseys during warmups to benefit the cause. 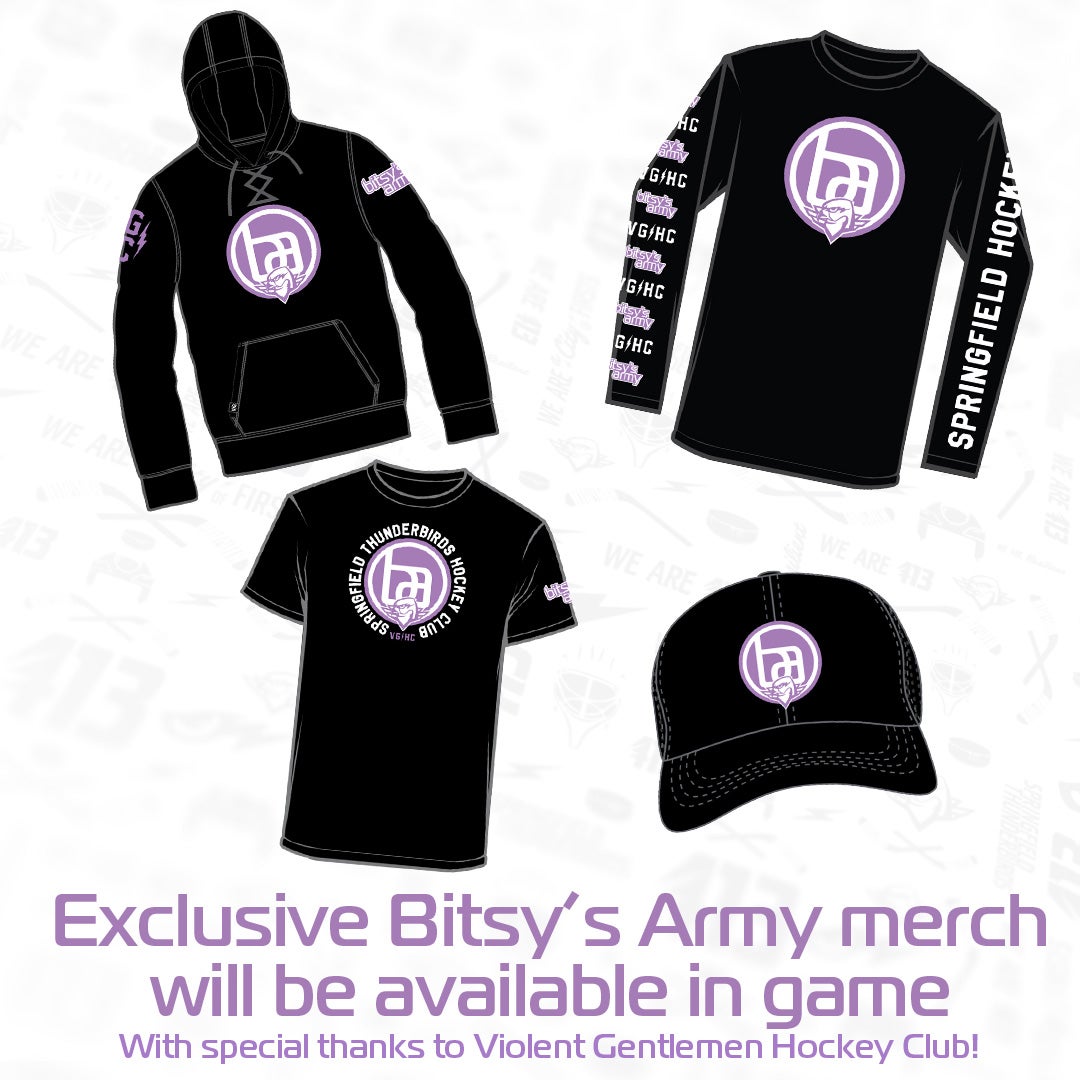 Select in-game elements at Springfield’s Hockey Fights Cancer Night on Nov. 19 will directly benefit Bitsy’s Army, the Brain Tumour Foundation of Canada, and other local cancer-fighting charities in Western Massachusetts, with the support of the T-Birds Foundation.