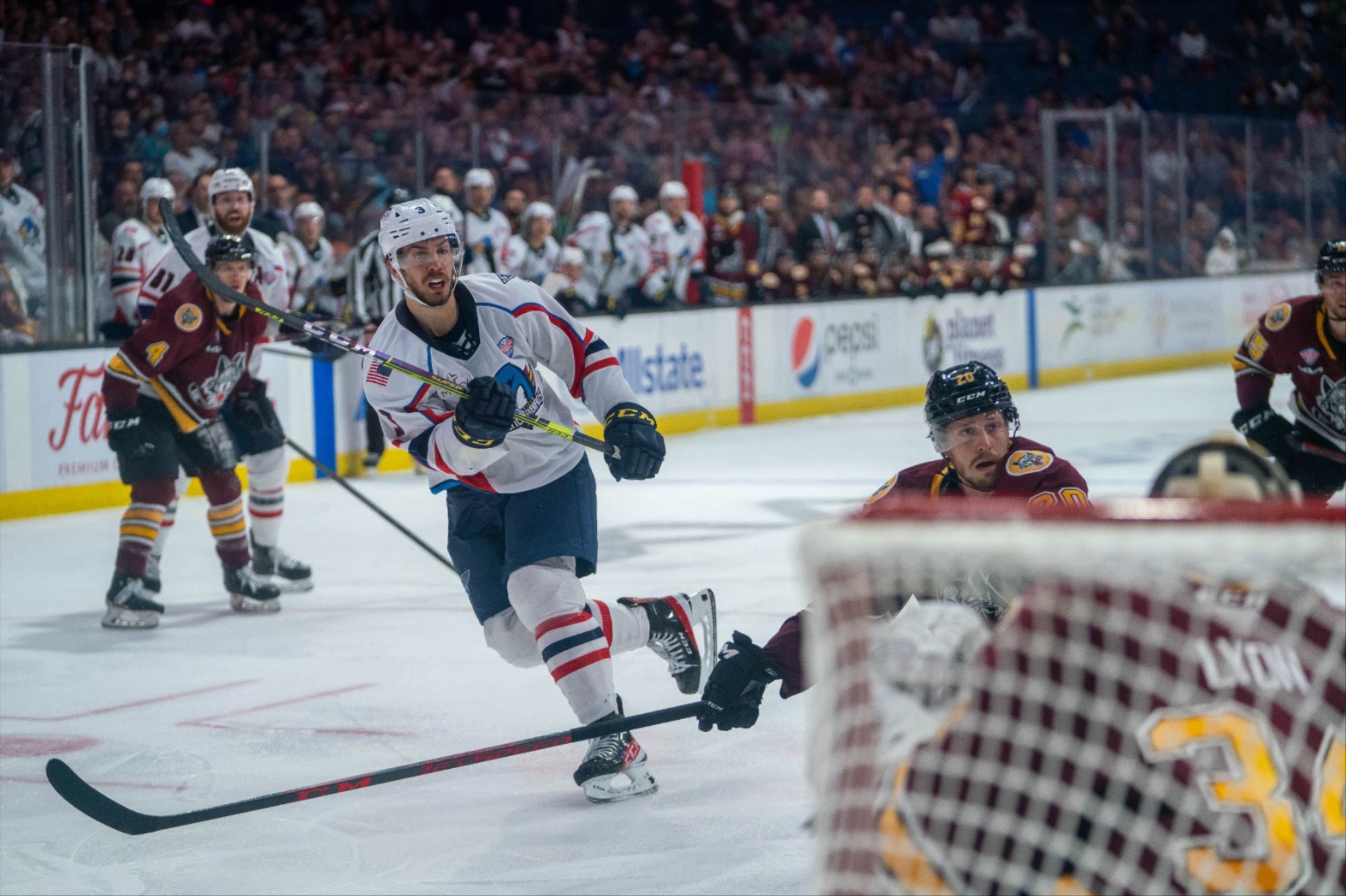 ROSEMONT, Ill. - The Springfield Thunderbirds erased a 4-2 third-period deficit and emerged with a 5-4 overtime win over the Chicago Wolves in Game 1 of the Calder Cup Finals at Allstate Arena on Sunday afternoon.

The two teams showed little shyness in the opening minutes, as the clubs traded a combined 13 shots in the first six minutes of play in the series, forcing Alex Lyon of Chicago and Charlie Lindgren of Springfield to be at their alert best in their respective goal creases.

Springfield would have to take the first punch of the series when Chicago's potent power play struck on their first attempt at the 10:07 mark of the period. Rookie Jack Drury would be the beneficiary of a rink-wide feed from regular-season scoring champion Andrew Poturalski. Drury's wrist shot sneaked under Lindgren's legs to give the Wolves the 1-0 jump.

After failing to connect on their first power play, though, the Thunderbirds answered back on their second try. Calle Rosen pulled the trigger on a one-timer from center point position. Lyon stopped the initial try, but the rebound sat just outside the paint, where Chicago native Hugh McGing was in the right place to jam the second chance through Lyon to tie the score, 1-1, at 14:15.

The Thunderbirds' penalty kill then hung tough despite being stuck in their own zone for the better part of the Chicago advantage. Moments after killing it off, with less than a minute to go in the period, Will Bitten kicked a puck loose inside the Chicago zone along the right-wing boards. Brady Lyle hopped up into the rush to take the feed and beautifully slipped a backhand pass into the slot to Matthew Peca. Already with an assist to his credit in the period, Peca picked the top corner over Lyon's glove, and Springfield entered the first intermission of the series with the 2-1 advantage, despite being outshot 18-13 in the period.

Defense was the calling card of period two with the exception of a 17-second blitz by the Wolves to restore the Chicago lead. After killing a Springfield power play, Richard Panik pulled a puck into the slot on his backhand and elevated a backhand shot over Lindgren to tie the score, 2-2, at 8:01.

Before the T-Birds could recover, an icing gave the Wolves an offensive zone draw, and right off the face-off win by Drury, Cavan Fitzgerald found David Gust along the left-wing wall. Without hesitation, Gust surprised Lindgren with a low shot that squeezed through the T-Birds' netminder to give Chicago its second lead of the night, 3-2. Other than the two quick Wolves goals, the two teams combined for 19 saves between Lyon and Lindgren in period two.

It appeared the Wolves power play may put the game away when Stefan Noesen deflected a Josh Leivo shot through Lindgren's legs just 29 seconds into the third to make it 4-2, but Springfield had a quick rebuttal as Tommy Cross got a half-slapper over Lyon's shoulder in traffic to get the score to 4-3 at the 53-second mark of the final period.

Springfield had trouble registering consistent offense for much of the next 17 minutes, but with Lindgren on the bench with less than two minutes to go, the never-say-die T-Birds found a way to equalize the score. Lyle stepped into a slapper from the right point, and while Lyon got a sliver of it, he could not keep it from squeaking into the net to tie the score, 4-4. Dakota Joshua and Bitten picked up the helpers on Lyle's second point of Game 1.

The Thunderbirds' power play had a glorious chance to win the game near the end of regulation when Joey Keane took a delay-of-game penalty just five seconds after Lyle's equalizer, but the Chicago PK held the fort into the early stages of overtime to keep the score tied, 4-4.

However, Springfield would not have to wait long to find a hero, as rookie Matt Kessel, in just his 29th professional game between the regular season and postseason, jumped up into the rush in the right circle, took a drop pass from James Neal, and beat Lyon with a wrist shot to give Springfield the 5-4 victory. It was the former UMASS Minuteman's first professional goal.

Kessel's heroics have now given Springfield the home-ice advantage in the Calder Cup Finals. The T-Birds try to win a second straight game in Illinois on Monday night, as puck drop for Game 2 is set for 8:00 p.m. ET at Allstate Arena.

The full series schedule can be seen below: