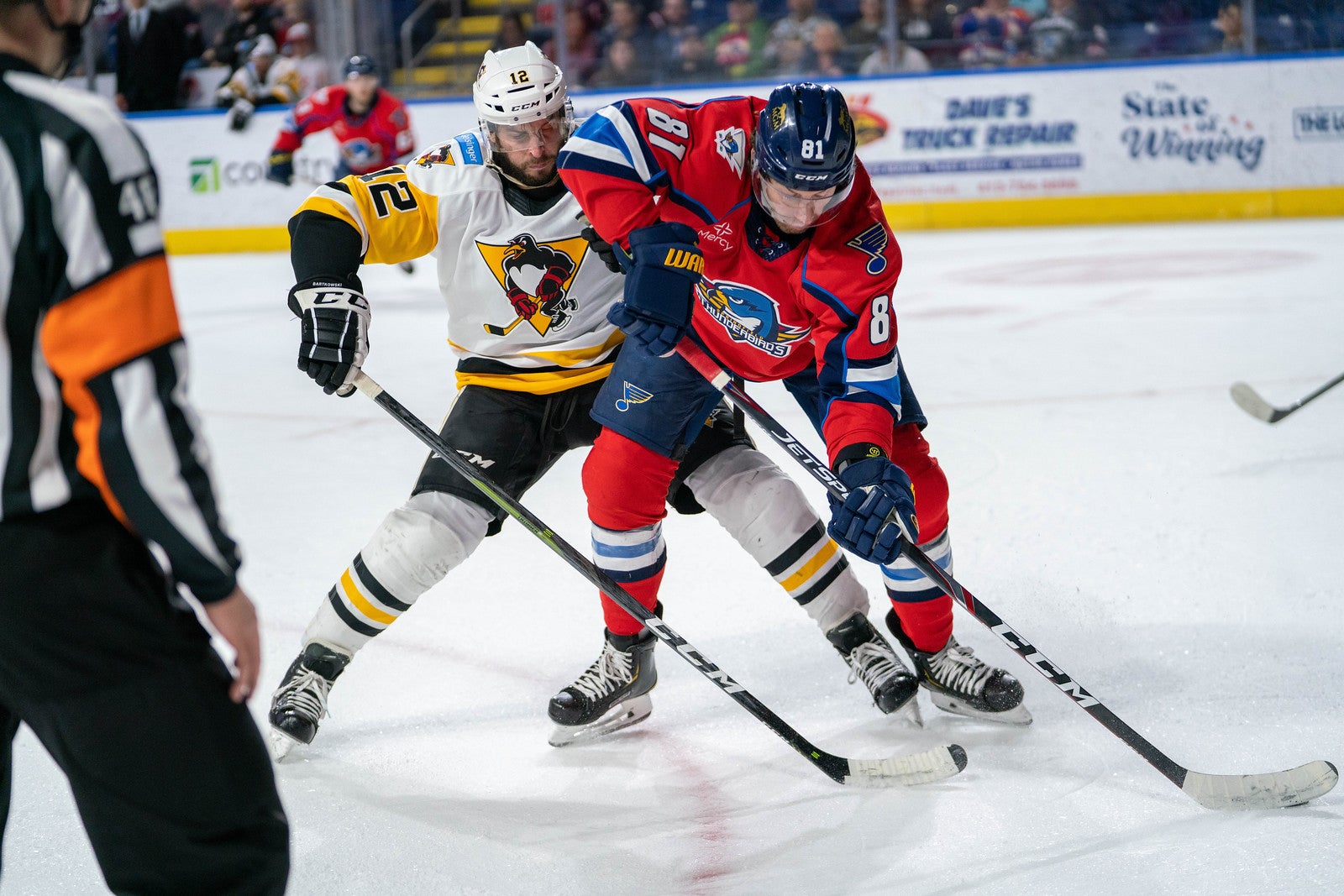 SPRINGFIELD, Mass. - The Springfield Thunderbirds will open their first-ever Calder Cup Playoff series on Wednesday, May 11 against the Wilkes-Barre/Scranton Penguins inside the MassMutual Center. 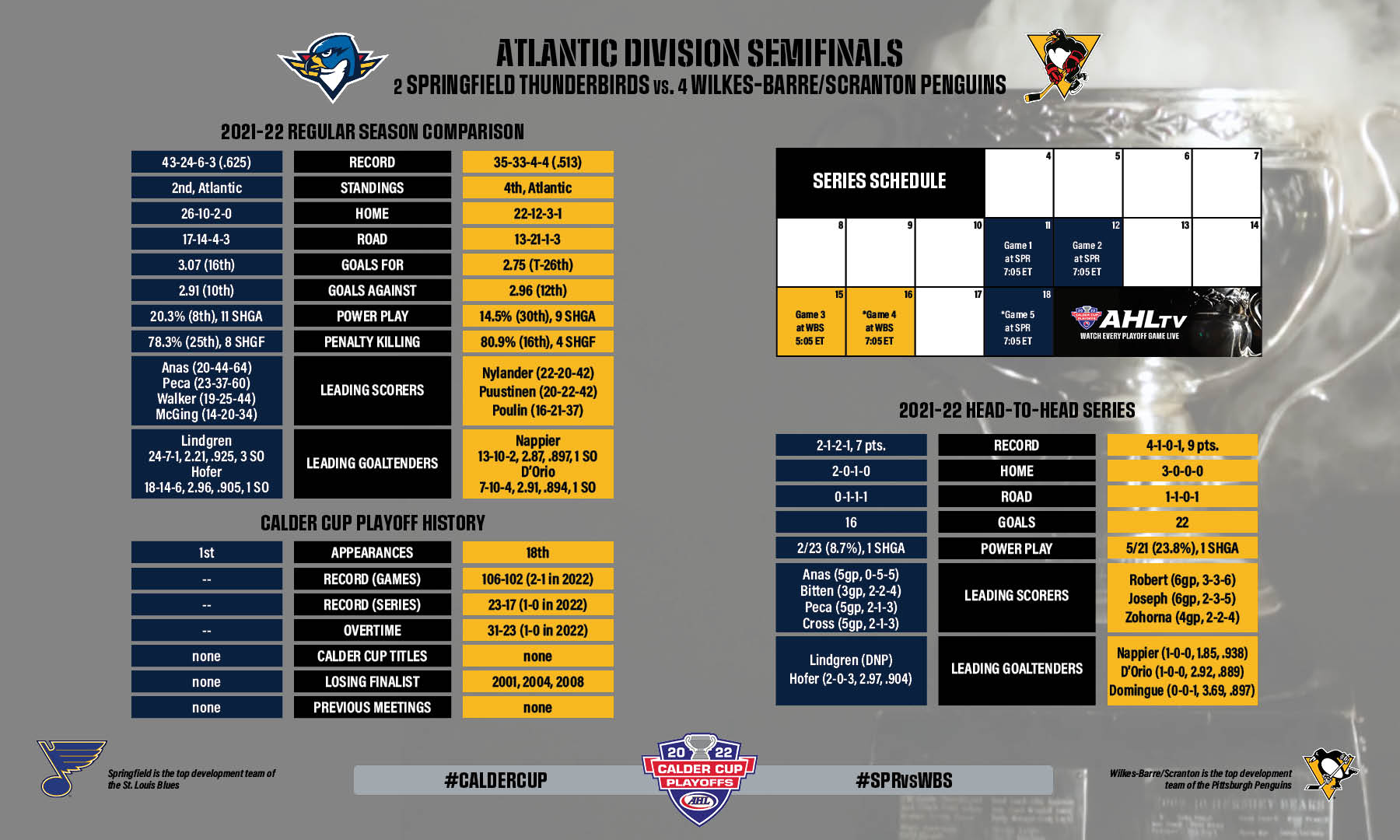 Game 1 tickets can be purchased by clicking here.

The full schedule for the Atlantic Division Semifinals is as follows - games marked with an asterisk (*) will be played only if necessary.

The T-Birds and Penguins played a tightly-contested season series with four of the six meetings during the regular season going beyond regulation time. Wilkes-Barre/Scranton took the season series, winning four of the six matchups. Over the past five years, nine of the last 21 regular-season meetings between these Atlantic rivals have reached overtime.

Springfield did get the better of the Penguins, 3-1, in the last meeting between the clubs on April 23 in front of a sold-out crowd of 6,793 at the MassMutual Center. Joel Hofer anchored the win between the pipes for the T-Birds with 32 saves on 33 Wilkes-Barre/Scranton shot attempts. Tommy Cross, James Neal, and Will Bitten all scored in the Springfield victory. Neal, a former Pittsburgh Penguin, scored a goal in each of the two games he played against Wilkes-Barre/Scranton this season.

The Penguins' Radim Zohorna's power-play goal in the first period was the last time the T-Birds allowed a goal in a game. Hofer and Charlie Lindgren have combined to go the last 232:55 of regular-season game action without allowing a single tally by an opponent. Springfield outscored its opponents 15-1 over the season's final four games. Wilkes-Barre/Scranton, on the other hand, dropped its final four regular-season games prior to defeating Hershey in the Playoffs' opening round.

Coincidentally, Lindgren did not see any action in the six-game season series against the Penguins, while Hofer appeared in all six meetings, posting a 2.97 goals-against average and a .904 save percentage. The rookie netminder did not lose in regulation against Wilkes-Barre/Scranton all season.

On the Wilkes-Barre/Scranton side, Felix Robert led all Penguins with six points (3g, 3a) in six games against the Thunderbirds. The centerman was one of eight different Penguins to have four points or more in the season series. Despite being ranked 27th in the 31-team AHL in goals per game, the Penguins offense did some of its best work against Springfield, outscoring the T-Birds 22-16 in the season series, averaging 3.67 goals per game.

The Penguins had the unique oddity of starting six different goaltenders over the six-game season series against Springfield. Tommy Nappier, who backstopped the Penguins to a first-round win over Hershey, appeared in one of those six, earning a 3-2 shootout win in Wilkes-Barre on Feb. 19 by making 30 saves in regulation before turning away Anas, Neal, and Hugh McGing in the shootout.

This series marks the city of Springfield's first playoff action since May 3, 2014, when the Falcons dropped Game 5 of their first-round series against the Providence Bruins. It is also the first-ever postseason series between Springfield and Wilkes-Barre/Scranton since the Penguins' entrance into the AHL in 1999.

Thunderbirds' playoff tickets, including single-game tickets and Pay As We Play plans, are on sale now! To purchase your seats, call (413) 739-GOAL (4625) or visit www.SpringfieldThunderbirds.com.