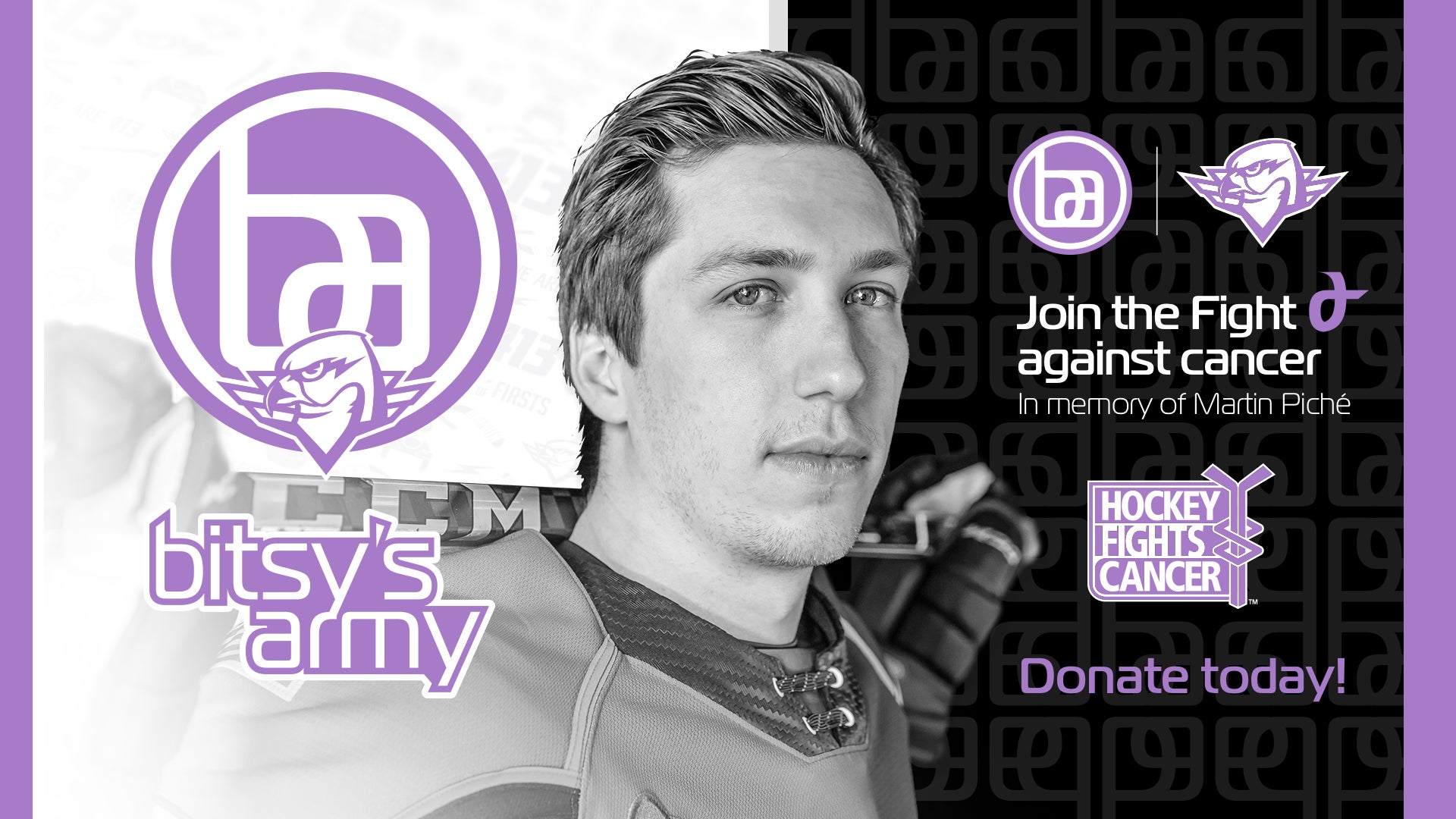 Donate to Bitsy's Army in Support of Brain Cancer Research

SPRINGFIELD, Mass. -  The Springfield Thunderbirds will host their annual Hockey Fights Cancer Night on Saturday, Nov. 19 as the team faces off against the Charlotte Checkers at 7:05 p.m. inside the MassMutual Center.

This year's Hockey Fights Cancer game will have a deeply meaningful connection to Thunderbirds winger Will Bitten. Bitten's cousin, Martin Piché, bravely fought brain cancer for seven years after initially being diagnosed in May 2014. Tragically, at just 32 years of age, Piché passed away on January 8, 2021.

"My family and I are grateful to the Springfield Thunderbirds for all of their support," said Bitten. "Hockey Fights Cancer will always be near and dear to us. Martin's legacy will always be remembered, and we stand with those who are still going through the battle themselves."

In memory of Piché, Bitten and the Thunderbirds will adorn specialty "Bitsy's Army" warmup jerseys before the game on Nov. 19. Those uniforms will go up for auction, with portions of the proceeds benefiting the Brain Tumour Foundation of Canada.

"At the Thunderbirds, we support one another, both on and off the ice, like family," said Thunderbirds President Nathan Costa. "We extend our deepest condolences to the Bitten and Piché families for the loss they have experienced, but at the same time, we are honored to support Will as he continues the fight against cancer with the same tenacious spirit Martin showed. We encourage all our fans to show Will their generosity and support in contributing to the cause and making this night one of the most meaningful in our history."

There will be numerous ways that Thunderbirds fans can show their support of Bitsy's Army and Hockey Fights Cancer. In addition to the warmup jerseys, which were created with the support of the Violent Gentlemen Hockey Club, numerous in-game elements will have a charitable component. These include the bankESB 50-50 drawing and Chuck-a-Puck contests. The Thunderbirds Foundation has also started a Bitsy's Army GoFundMe page, where fans can donate any amount by clicking here.

Fans in Canada who would like to contribute directly to Bitsy's Army can do so by clicking here.

The Thunderbirds will also be unveiling special Bitsy's Army merchandise items, such as apparel and commemorative pucks, which will see a portion of the proceeds go to both the Brain Tumour Foundation of Canada as well as local cancer-based charities in Western Massachusetts.

Founded in 1998 by the National Hockey League® and the National Hockey League Players' Association, Hockey Fights Cancer™ (HFC) unites the hockey community in support of cancer patients and their families. The initiative gets an assist from players, coaches, officials, equipment managers, front office staff, corporate partners, and fans. Together, the hockey family looks to inspire hope and courage for those who are living with, going through, and moving past cancer.