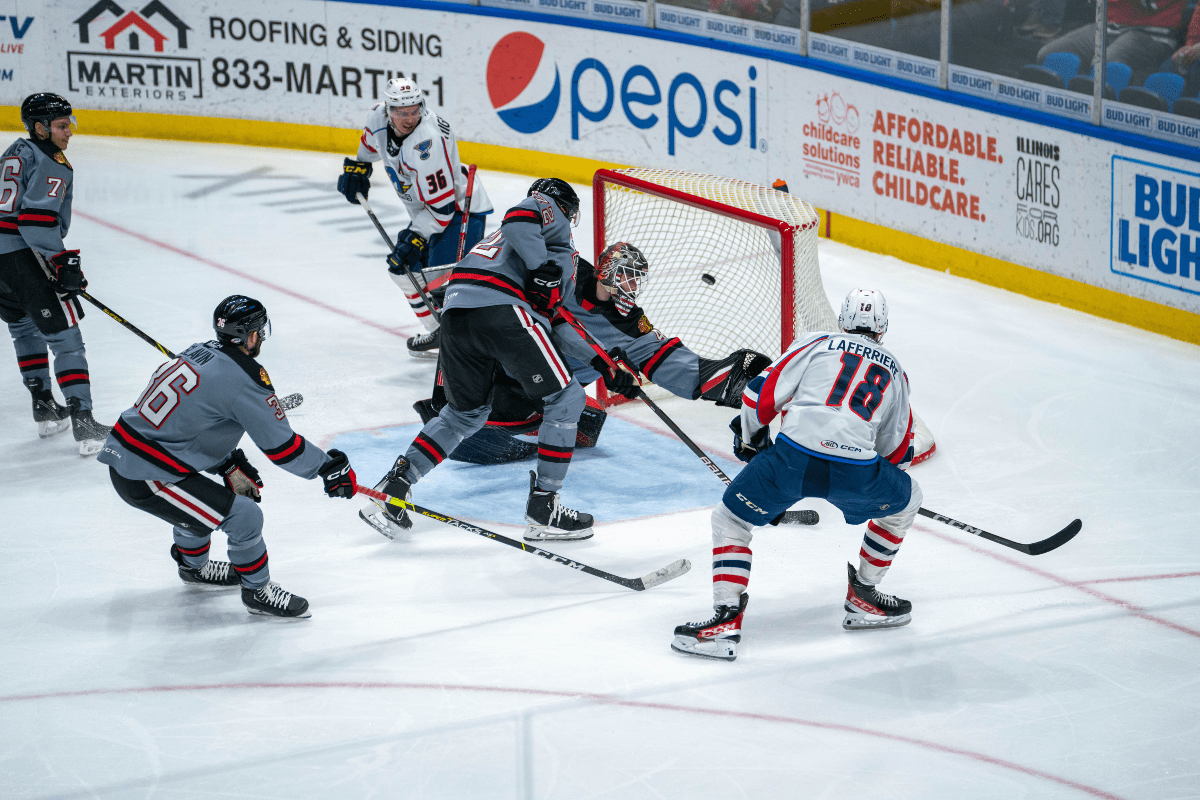 Special teams proved to be the T-Birds' advantage and Rockford's undoing in the opening 10 minutes. On their first power play, the T-Birds took advantage as Martin Frk carried the puck into the right corner, throwing a pass in front of Arvid Soderblom's net. There was a stroke of luck involved, as it caromed off a skate right to the waiting stick of Mitchell Hoelscher, who deposited the puck into an empty goal. Hoelscher's fourth of the season gave Springfield the 1-0 lead at 4:09.

The T-Birds' penalty kill got a healthy workout in the opening minutes as well, as they fended off over a minute of time with just three skaters on the ice. Shortly after getting a fourth player back, Hugh McGing connected in his home state with a high-rising wrist shot over Soderblom's glove hand at 8:49 to make it a 2-0 game.

Vadim Zherenko stopped eight shots in the opening period, but the IceHogs did cut the lead in half when, at the 13:13 timestamp, Luke Philp caught up to a second chance off Zherenko's pad and fired a wrist shot through the legs of the Springfield goalie to make it 2-1.

Former IceHog Matthew Highmore proved to be a difference maker as he opened the second period scoring just 38 seconds into the frame, picking up an Austin Osmanski shot that ricocheted off of Matthew Peca in front of the crease. Highmore's empty-net tally made it 3-1.

Special teams continued to prove Springfield the superior squad as the penalty kill dispatched three consecutive Rockford advantages in the middle period, making them a perfect 5-for-5 through 40 minutes. Dave Gust would get the IceHogs back to a 3-2 margin at 7:53 of the period when he surprised Zherenko with a bad-angle shot from the right corner that squeaked under the goalie's pads. It made Gust the AHL's fourth 20-goal-scorer of the 2022-23 season.

Undaunted, the Thunderbirds' power play then did what Rockford's could not, as Highmore stopped a puck at the left side of Soderblom's net before saucering a perfect pass across the top of the blue paint to a crashing Mathias Laferriere, who jammed it into a vacant goal to make it 4-2 at 13:52.

The T-Birds were not content with just a two-goal cushion, and the power play came up with a third tally as Keean Washkurak split two defenders and beat Soderblom on the glove side while being tripped in the left circle. The goal at 8:09 of the period made it a 5-2 score.

Adding to the fun, Jacob Hayhurst, who was inserted into the lineup when Greg Printz was unable to play, added his first career AHL goal at 11:45. Anthony Angello started it by poking a puck in near Soderblom, then tracked it down below the goal line before centering it out front. Hayhurst elevated it over the blocker of Soderblom, making it 6-2.

Hayhurst was not finished, and with 2:18 to play, Drew Callin sent him away on a breakaway, and Hayhurst made no mistake as he drilled the top shelf on the stick side of Soderblom, rounding out the T-Birds' third 7-goal performance of the season.

Zherenko was superb at the other end all night, making 18 saves in the third period alone on his way to a 41-save win.

Having now won two straight, the T-Birds look to complete a three-game midwest sweep as they visit the Grand Rapids Griffins on Saturday night for a 7:00 p.m. puck drop inside Van Andel Arena.