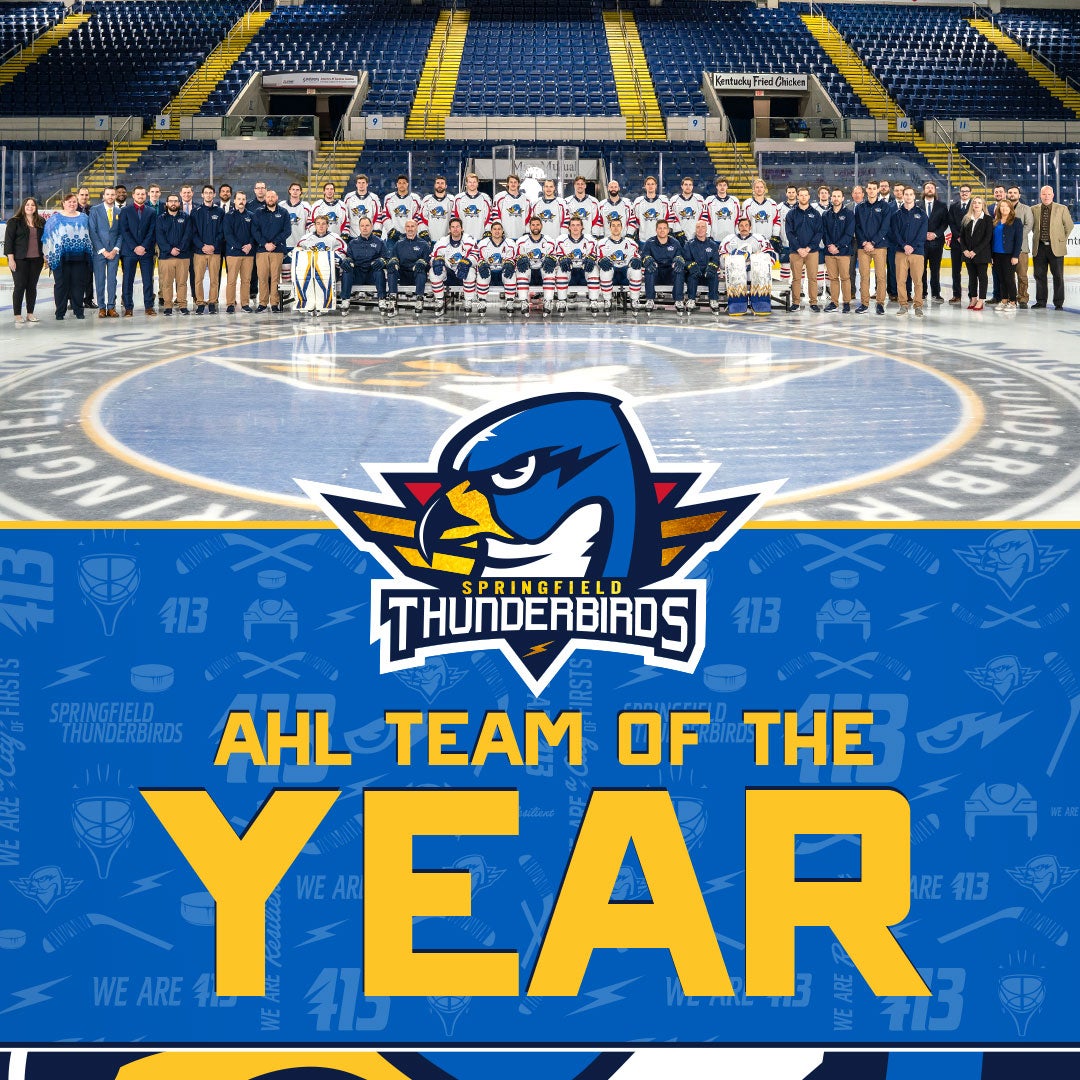 SPRINGFIELD, Mass. - The American Hockey League today announced the Springfield Thunderbirds as the winner of the President’s Award for the 2021-2022 season during the Board of Governors' Annual Meeting in Hilton Head Island, S.C.

Bestowed upon the team that demonstrates overall excellence both on and off the ice, the Thunderbirds captured Team of the Year honors following a historic season that 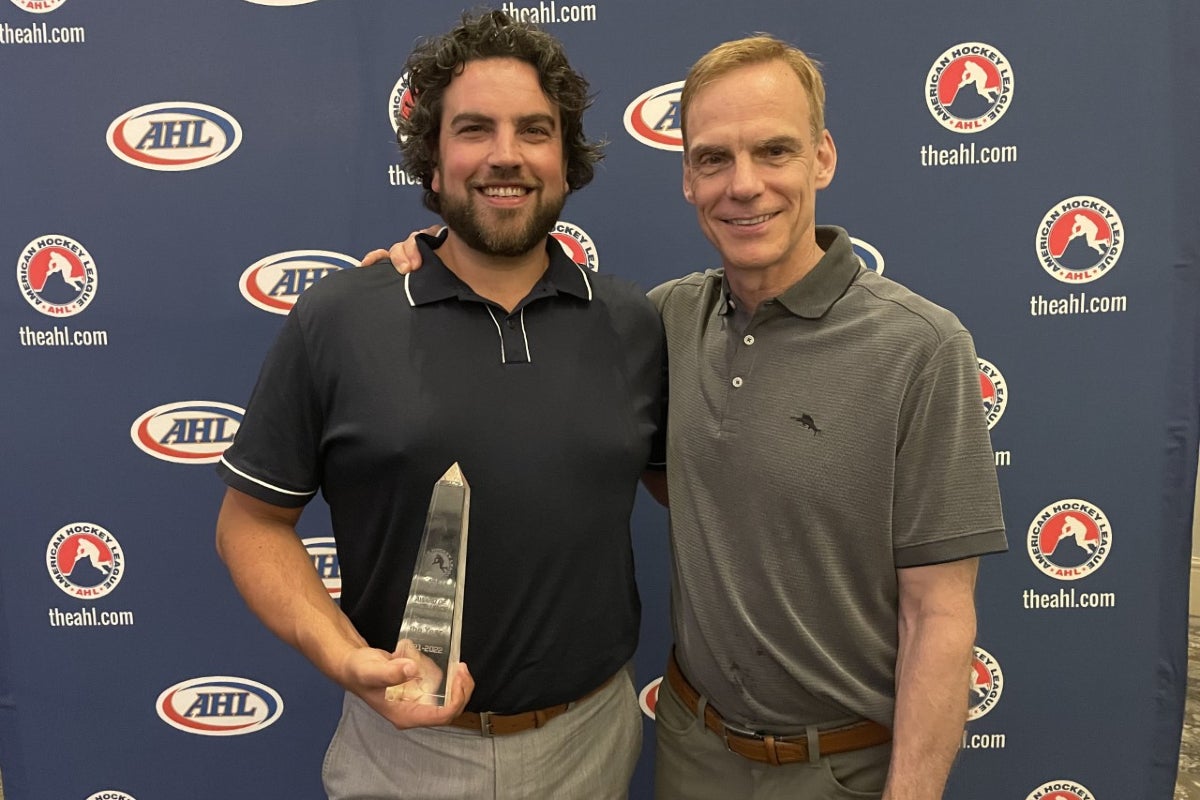 "On behalf of the entire Thunderbirds ownership group, we are honored to receive the AHL’s prestigious President’s Award for Team of the Year," said Thunderbirds Managing Partner Paul Picknelly. "In a short six years, we went from the precipice of losing professional hockey in Springfield to Eastern Conference Champions and three sellout crowds in the Calder Cup Finals. None of this would have been possible without Team President Nate Costa, the entire T-Birds staff, our partners at the St. Louis Blues, and of course the best fans in all of hockey. This award belongs to all of them.”

In addition to the President’s Award, the Thunderbirds were previously recognized at the AHL Team Business Awards for reaching 600 new Full Season Equivalents (FSEs) during the 2021-22 season. One FSE equates to one full season ticket sold. The Club was also lauded for achieving a greater-than-83-percent renewal rate in corporate sponsorships.

During their run to the Calder Cup Finals, the Thunderbirds' MassMutual Center attendance numbers soared to new heights, with an average of 6,134 fans on hand for the team's 11 home playoff games. Game 7 of the Eastern Conference Finals, as well as all three of the club's home games during the Calder Cup Finals, featured sellout crowds of 6,793. In the process, the Thunderbirds smashed their club record for single-game ticket revenue multiple times and created a high-energy, in-game presentation that turned the Thunderdome into one of the toughest buildings for opposing teams during the postseason.

"I could not be more proud of our amazing staff for their tireless efforts throughout this historic year," said Thunderbirds President Nathan Costa. "From day one, we all believed this organization was capable of establishing itself as one of the model franchises in the American Hockey League, and this recognition serves as the ultimate validation."

The Thunderbirds' success could be seen in their digital footprint as well. Over a 365-day period, the T-Birds' social media platforms saw more than five million users reached, over four million new page visits, and more than 20,000 new followers across Facebook, Twitter, and Instagram. In the month of June alone, as the club marched into the Calder Cup Finals, Springfield saw more than two million visitors across its social outlets. The team's #WeAre413 marketing campaign was also recognized as the Marketing Campaign of the Year last month by the AHL.

Despite a year that still featured some COVID-19 restrictions, the Thunderbirds' community presence was felt throughout the region, with team mascot Boomer making more than 125 visits during the season to a wide variety of community and charitable events. Perhaps no one program was more prevalent than the team's Stick to Reading initiative, which featured a franchise-record 24 participating schools.

The awards did not stop with the Team of the Year for the Thunderbirds, as general manager Kevin McDonald was named the recipient of the Thomas Ebright Memorial Award for outstanding career contributions in the AHL over his three

decades in professional hockey. McDonald joined the St. Louis Blues organization in 2001 and has overseen the Blues’ AHL affiliates for the last 17 seasons.

Highly regarded for his professionalism and tireless dedication, McDonald quickly forged a strong partnership with the Blues’ new affiliate, the Springfield Thunderbirds. He worked through a challenging 2021-22 season – one impacted again by the effects of the COVID-19 pandemic – to ice one of the most successful teams in the long history of AHL hockey in Springfield. There is perhaps no greater testament to McDonald’s impact this season than the fact that players who suited up for the Thunderbirds skated in a combined total of 249 NHL games with the St. Louis Blues during the 2021-22 campaign.

"Kevin has been one of the most highly respected executives in the AHL throughout his career, and we could not be happier to see his hard work recognized league-wide," said Costa. "He is the ultimate professional, an outstanding evaluator of on-ice talent, and an even better person. We join the rest of his peers in congratulating him on a much-deserved honor."