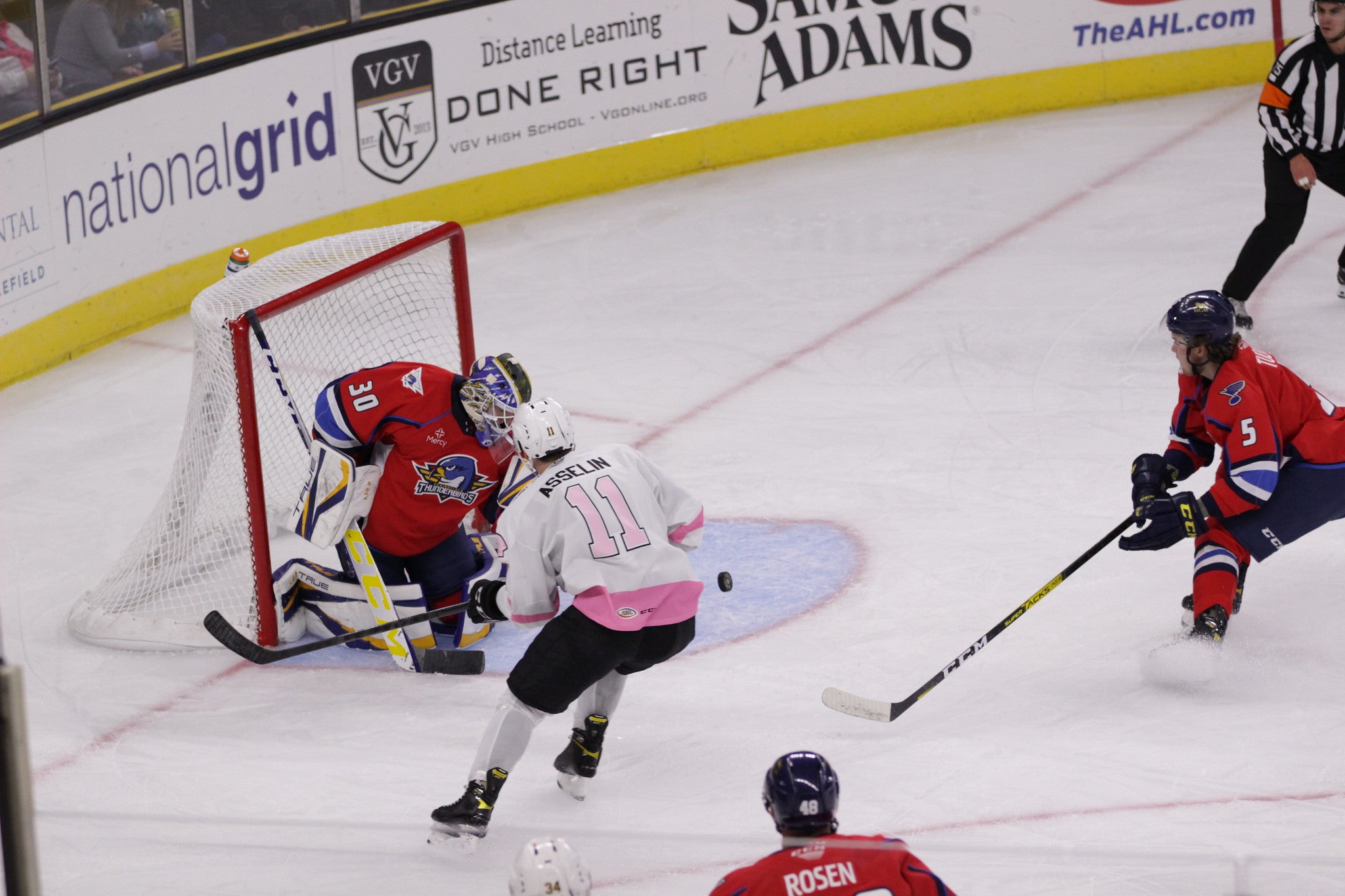 T-Birds Pull Away in 3rd Period to Down Bruins

PROVIDENCE, R.I. – The Springfield Thunderbirds (4-0-1-0) won the battle of special teams and received a phenomenal goaltending performance in a 4-1 win over the Providence Bruins (1-2-1-1) on Sunday afternoon inside the Dunkin' Donuts Center.

The Bruins, fresh off a 4-0 loss on home ice on Saturday, came out with an edge to their game in the first period, generating 10 shots before the game even reached the midpoint of the opening frame. Springfield got into penalty trouble as two successive minors put Providence onto a 5-on-3 in the closing minutes. That proved lethal to the T-Birds' penalty killers as Jack Ahcan cranked a one-time feed from Jakub Lauko over the glove of Joel Hofer at 15:36 of the first period.

Young Bruins goalie Kyle Keyser had a lighter workload in the opening period but passed each of the seven shots that tested him to hold Providence's lead into the dressing room.

While Hofer was the busier masked man in the opening period, Keyser had a much bigger workload in the second, with 17 shots on his net. Springfield took advantage of their own two-man advantage to deadlock the game at 14:41 of the second. From the top of the right-wing circle, Matthew Peca simplified the game and wristed a beautifully-placed shot off the back bar to tie the score, 1-1. That call was upheld after play was abruptly halted by referees deeming the shot a goal.

Hofer still had plenty of work in the middle period, but he had every answer for the Bruins' 13 second period offerings. The Thunderbirds' penalty kill also stiffened to stonewall the Bruins on parts of three separate Providence power plays.

For the third time this season, the T-Birds entered the third period in a tie game, and for a third time, Springfield rose to the occasion, beginning with a power play goal by Nikita Alexandrov at the 10:29 mark, as he backhanded a diagonal pass from Scott Perunovich over Keyser to give the T-Birds their first lead, 2-1.

Less than six minutes later, and just seconds after a power play expired, Peca added a second goal by throwing a wrist shot off a Bruins defender and off the underside of the crossbar to push the lead to 3-1 at 16:20.

The T-Birds won the battle of special teams in this penalty-ridden contest, going 2-for-8 on the man advantage while killing seven of Providence's eight power plays on the afternoon. The T-Birds' 4-0-1-0 start is the best to begin a season since they began the 2018-19 season 7-0-0-2.

While the offense shined, Hofer remained steady as ever in the goal crease, finishing his night with a season-high 39 stops to improve to 3-0 on his season. Hofer has allowed just three goals in his first three starts as a T-Bird.

Springfield returns home after a much-deserved rest to face Wilkes-Barre/Scranton on Saturday, Oct. 30 at 7:05 p.m. inside the MassMutual Center.