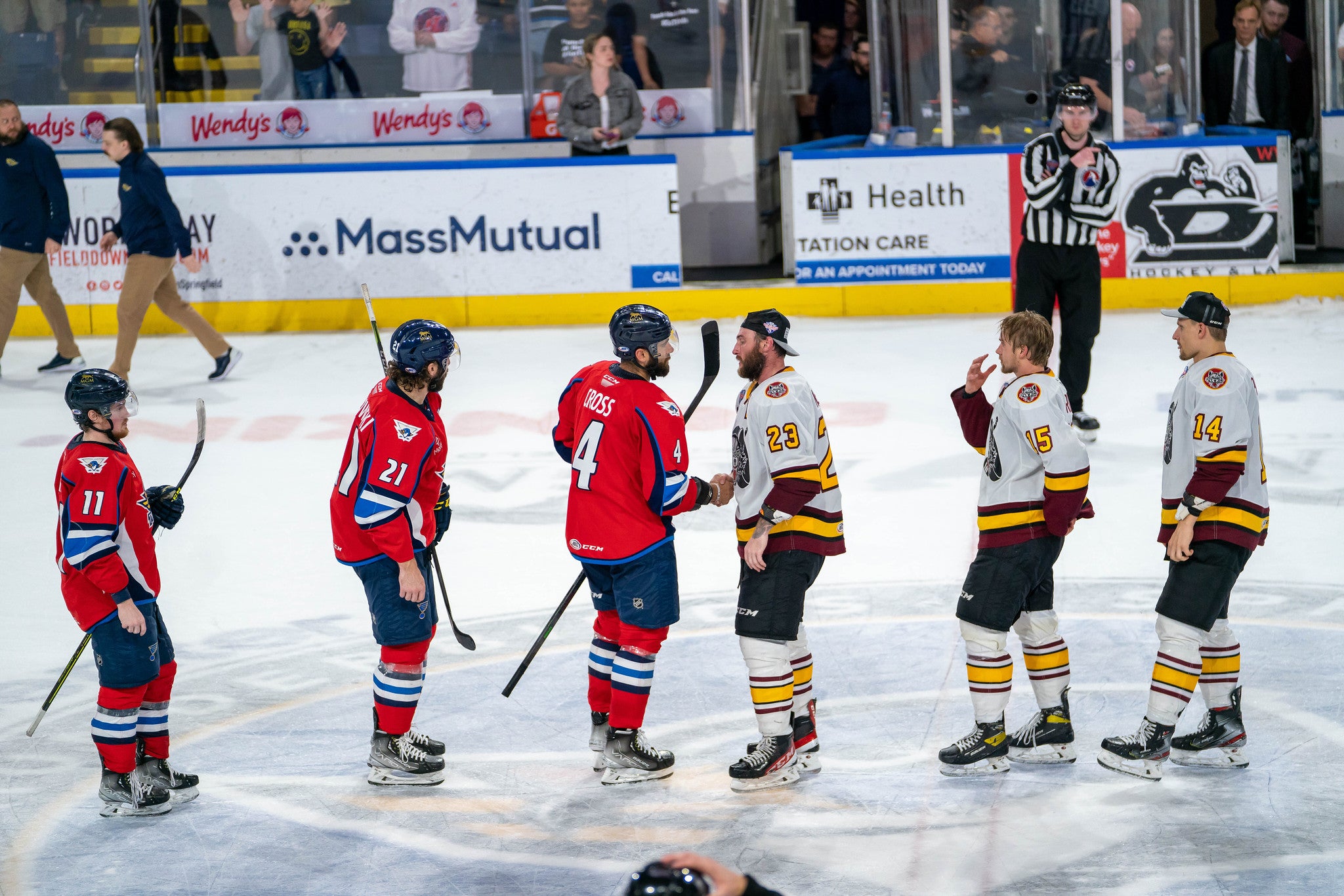 SPRINGFIELD, Mass. - The Springfield Thunderbirds ultimately could not overcome the AHL's top regular-season team, and the Chicago Wolves captured the Calder Cup with a 4-0 Game 5 win in the Calder Cup Finals in front of a sold-out crowd at the MassMutual Center.

The T-Birds entrusted the elimination game goaltending assignment to veteran Charlie Lindgren, who was a busy netminder in the first period, facing 13 Chicago shots despite the Wolves not managing to receive a power play. Lindgren came up with two remarkable right arm saves on Ivan Lodnia off a pair of broken plays in the slot area. First, Lindgren sprawled to his right to stonewall Lodnia on a backhand bid after the Wolves winger found a puck on a criss-cross play in the high slot. Lindgren kept Lodnia frustrated later when he snatched a high-rising snap shot with the glove as Lodnia found the puck in a sea of bodies between the face-off dots.

Despite Lindgren's best efforts, the Wolves still found a way to break through with just 1:21 left in the opening 20 minutes. Defenseman Max Lajoie moved up on a puck along the left-wing glass, skated it to the bottom of the circle, and elected to try a bad-angle shot on Lindgren. To the bad luck of the T-Birds, the puck struck a Springfield man in front of the crease and ricocheted into the net behind Lindgren's blocker arm, and for the fifth straight game, Chicago had the 1-0 lead.

Springfield had a difficult time all evening gaining entry into the Wolves zone, as Chicago locked down all three zones with suffocating defensive play. Chicago's first power play of the night resulted in their second goal when captain Andrew Poturalski redirected a Joey Keane shot through Lindgren at 16:01 of the second, giving the Wolves a 2-0 lead into the third.

Try as they might to get a puck through Chicago starting netminder Alex Lyon, luck would not be on the T-Birds' side this time, and David Gust added an insurance marker at 17:02 of the third. Josh Leivo, who captured the Jack Butterfield Trophy at Calder Cup Playoffs most valuable player, added an empty-net goal, his league-leading 15th of the postseason.

Springfield's season comes to a close, but under historic context. The 2021-22 Thunderbirds became the first playoff team in Springfield in the AHL since 2014, as well as the first to reach the Conference Finals since 1997 and the first to win a conference championship since 1991.