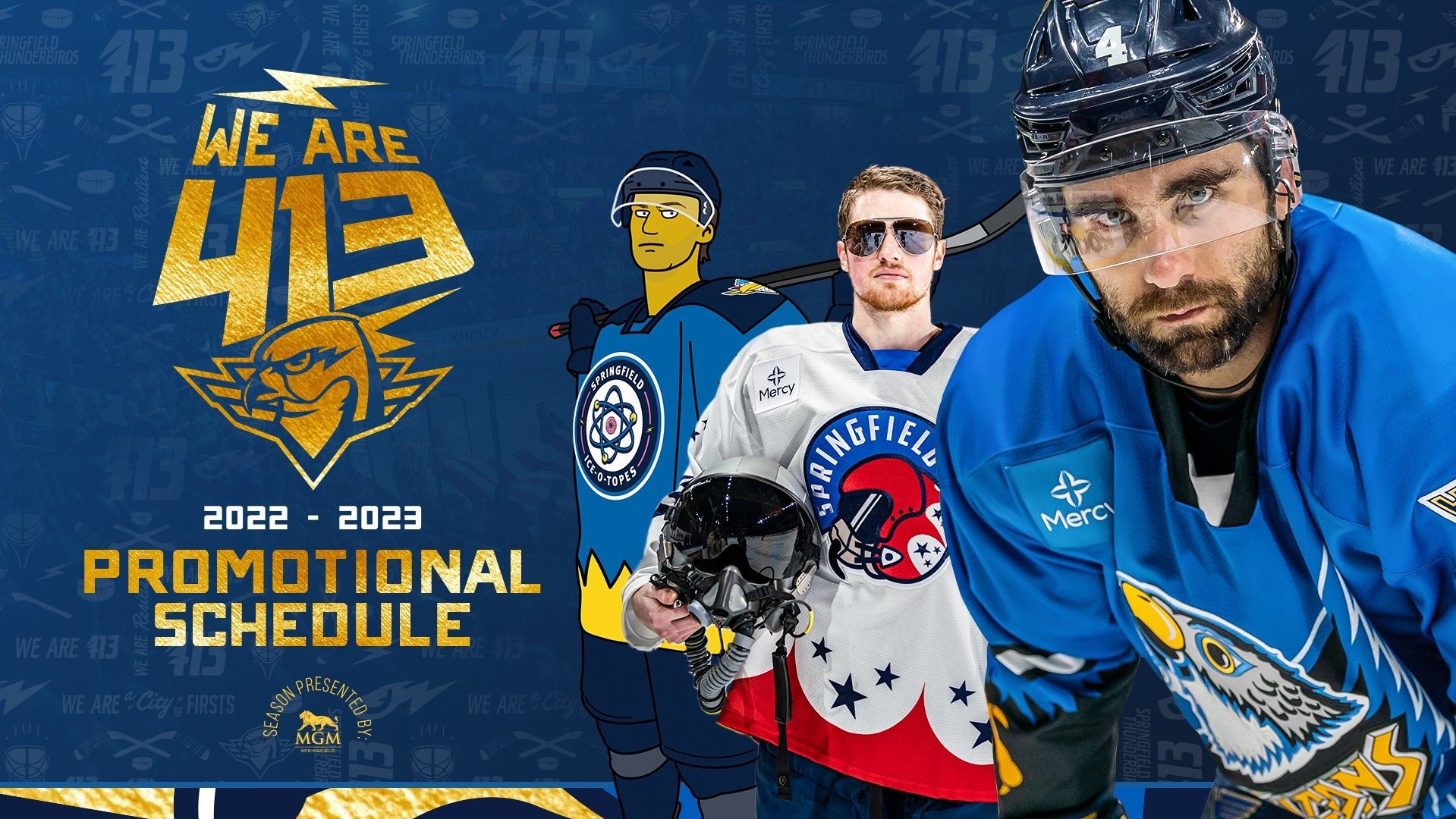 SPRINGFIELD, Mass. – The Springfield Thunderbirds, the proud AHL affiliate of the St. Louis Blues and defending AHL Eastern Conference champions, today announced their slate of promotions and theme nights for the 2022-23 season, presented by MGM Springfield. The reigning AHL Team of the Year will host 36 home games from October to April inside the MassMutual Center.

The pursuit of the Calder Cup begins on Saturday, Oct. 15 for Opening Night presented by MGM Springfield. In the team’s annual tradition, fans will be treated to a pregame Block Party in downtown Springfield from 4:00 - 6:00 PM presented by Community Bank N.A. with the support of the Springfield Business Improvement District (BID). The outdoor bash will feature live music, food, and drink. The location of the party will be announced at a later date. Thunderbirds fans will have the opportunity to get their hands on a plethora of giveaway souvenir items this season, beginning on Opening Night with commemorative Eastern Conference Champions mini-banners on each seat.

“The fifth season of Thunderbirds hockey was historic in every way, and our entire team is committed to making the 2022-23 season an even better encore,” said Thunderbirds President Nathan Costa. “Our fans will continue to receive the best in-game experience across a wide range of theme nights and fun activations that are sure to create memories for everybody. We would love nothing more than to be playing hockey and hosting meaningful games in June once again.”

Fans interested in attending Opening Night can take advantage of a value offer with the purchase of a Dunkin’ Opening Night Pack, which starts at $90 in the Defense Zone, $105 in the Attack Zone sections, and $120 in the Center Value Zone sections. Fans who purchase a pack will receive: two (2) tickets to Opening Night on Oct. 15; four (4) vouchers redeemable at any regular season game in 2022-23 (subject to availability); one (1) T-Birds hat; a Dunkin’ gift card; and one (1) Big E admission*.

The Thunderbirds will open the regular season on home ice for a third straight season, seeking their sixth consecutive Opening Night sellout crowd as they host the Bridgeport Islanders on Saturday, Oct. 15 at 7:05 p.m. Prior to game action, the T-Birds will host an annual tradition in downtown Springfield, the Community Bank N.A. Pregame Block Party, with support from the Springfield BID, featuring live music, food, and drink. The Block Party location will be announced at a later date.

Returning for its fourth year, Ok-T-Bird-Fest will see the Thunderbirds transform the Thunderdome into an Oktoberfest-inspired beer hall for a special pregame beer tasting event inside the MassMutual Center. More details, including a list of participating breweries, will be announced in the coming weeks.

The Thunderbirds will turn the Thunderdome into its own special version of an iconic festival for fans of The Black Panther and The Incredible Hulk, as both of those legendary Marvel™ characters will be on hand for pregame photographs on the concourse.

Following a crowd of over 6,000 energetic school children in 2019, the T-Birds will host their first School Day Game in three years on the morning of November 16. Students from the area will have a chance to have hockey in their curriculum for a day with links between the blue line and the classroom throughout the morning. Every student in attendance will get a T-Birds school workbook with educational hockey-based activities.

The Thunderbirds, for the first time in their history, will unveil an alternate third jersey before they square off with the Penguins on Nov. 26. The new-look sweater will be made available at the Thunderbirds team store in-arena that evening. Stay tuned for a sneak preview of the jersey in the coming weeks.

The Annual Teddy Bear Toss highlights the giving spirit of the holiday season when the T-Birds host the Milwaukee Admirals for the first time on Saturday, Dec. 10.  Stuffed animals will rain down during the celebration of Springfield’s first goal and, in turn, those toys will be donated to underprivileged children for the holiday season. Past benefactors have included the Boys & Girls Clubs, Ronald McDonald House, and Square One.

The Thunderbirds’ annual “blast from the past” tradition continues on Jan. 7 against the Utica Comets as part of Throwback Night presented by MassMutual. As has become customary on Throwback Night, the T-Birds will once again salute Springfield’s historic hockey past. The game experience will also bring about a vintage look and feel in elements of the game presentation and building decoration.

As has become another annual tradition, Springfield’s everyday heroes will be recognized on Hometown Heroes Night presented by M&T Bank. Pioneer Valley police, fire, and first responders will be honored throughout the evening, and the night will feature a parade of the department vehicles on the ice during an intermission.

For the third time, the Thunderbirds will take on the moniker of Springfield’s favorite cartoon family for the third Ice-O-Topes Night at the MassMutual Center. The T-Birds will wear one-of-a-kind specialty jerseys for the evening, which will be auctioned live postgame.

The Thunderbirds, for a second straight season, will incorporate a military-inspired design on yet another specialty jersey as the team honors the brave men and women in our Armed Forces (both active and veteran). There will again be a postgame auction for these unique jerseys.

The 3rd annual Sensory Friendly Sunday, presented by CHD, will allow fans with sensory sensitivities to enjoy a more easygoing atmosphere, as the game presentation will feature decreased stimulation in the form of no strobing lights, decreased volume levels, and “cool down” stations outside of the seating bowl.

The Thunderbirds will commemorate Joel Hofer’s historic playoff goal on Saturday, March 4 against Charlotte when the celebration of his feat will be immortalized in bobblehead form, compliments of Stop & Shop. Hofer’s goal was the first scored by a goaltender in Thunderbirds history, and it marked the first time in AHL history that a goaltender physically shot the puck to score a goal in a postseason game. This limited edition collectible will only be given out to the first 2,500 fans inside the MassMutual Center that evening.

Pink in the Rink returns for a sixth straight installment, in conjunction with Baystate Health and the Rays of Hope Foundation. Before the game faces off, players and fans be involved in a ceremony dedicated to some of the bravest women in the Pioneer Valley - our area’s own breast cancer survivors. The Thunderbirds will wear pink specialty  jerseys to support the fight against breast cancer. Proceeds from jersey auctions will benefit the Rays of Hope Foundation in conjunction with Baystate Health, keeping the funds in Western Massachusetts.

The Thunderbirds will admit their four-legged “furiends” for a special dog-friendly St. Patty’s celebration at the rink, presented by Smithland Pet Supply. A portion of each dog ticket purchased that evening will benefit the Foundation for TJO Animals. Regulations and other policies surrounding St. Pawdy’s will be announced at a later time.

The Thunderbirds close the home-ice portion of their regular season with a pair of divisional rivalries inside the MassMutual Center.

For the final home game of the regular season, the Thunderbirds will host Pucks & Recreation Night and welcome special guest Jim O’Heir, better known for his role as Jerry Gergich (or is it Larry? Garry? Lenny? Terry?) on the television sitcom “Parks & Recreation.” O’Heir will be involved in a pregame meet-and-greet, as well as for the ceremonial puck drop before the T-Birds face the Hartford Wolf Pack on Saturday, April 15.

Friday evenings at the Thunderdome are once again going to be coined Deuces Wild Fridays, presented by MGM Springfield, and the evenings will continue to provide the ultimate value for T-Birds fans.

From the time the MassMutual Center doors open and through the end of the first period, Coors Light draft beers (12 oz), hot dogs, and sodas will all be sold for $2 each! Thunderbirds Full Season and 22 Game ticket members will also be able to get these great drink specials at every game this season.

In addition, Fridays mark the return of the Pregame Concert Series, which will continue to showcase some of the best local music talent every Friday night from 6:00 to 7:00 p.m. live on the concourse.

The Sunday Funday packs will be available for purchase up to 24 hours before Sunday games at the MassMutual Center and on the team website.

Characters appearing at Sunday Funday games will be announced at a later date.

The Thunderbirds’ five mid-week games will once again be billed as Winning Wednesdays presented by the Mass Lottery. Should the Thunderbirds win on a Wednesday, any fan with a ticket to the winning game will receive a complimentary ticket to the following Wednesday game on the season schedule. Last season, the T-Birds won each of their first four Wednesday night contests.

The Thunderbirds will have a number of unique promotional giveaways for fans to collect throughout the 2022-23 season, beginning on Opening Night as all fans in attendance will receive a Thunderbirds 2022 Eastern Conference Champions mini-banner on Saturday,  Oct 15. For both Opening Weekend games, fans can also receive a T-Birds magnet schedule upon exiting the MassMutual Center.

For the annual Ok-T-Bird-Fest on Saturday, Oct. 29, the first 1,000 fans 21-and-older at the Pregame Beer Tasting will receive a Thunderbirds collectible beer stein.

The first 2,000 fans in attendance on Friday, Dec. 30 will get a first-time holiday gift, a Boomer snow globe.

If you are one of the first 1,000 in attendance on Military Appreciation Night on Saturday, Feb. 25, you will receive a Thunderbirds military hat.

Joel Hofer’s historic goalie goal during the 2022 Calder Cup playoffs will be immortalized at the T-Birds game on Saturday, March 4, as the first 2,500 fans will receive a collectible Hofer bobblehead in his celebratory pose.

The annual Thunderbirds team poster will be given away to the first 1,000 fans at the team’s home game on Friday, April 7 against the Hershey Bears.

*Dates and promotions subject to change*

Springfield Thunderbirds fans are encouraged to visit www.SpringfieldThunderbirds.com to learn more about Thunderbirds Season Ticket Memberships. Packages feature the best savings plus the most benefits, including an exclusive commemorative jersey.