"Fresh Slate" in Florida Creating Opportunities for All

On the heels of a franchise-record 103-point season and Atlantic Division title in 2015-16, the Florida Panthers saw their 2016-17 season come down to earth in the midst of a storm of injuries and changes at the top level of management.

Excruciating as it was at times for the Panthers and their fans, and despite numerous changes – most notably Bob Boughner being hired by Florida to man the bench and Dale Tallon being placed in charge of hockey personnel as President of Hockey Operations/General Manager – the optimism heading into the 2017-18 campaign is palpable.

In Coral Springs this weekend, the Panthers began the process of turning the page as the Boughner era got underway at the team’s training camp. Unlike many other NHL franchises – Vegas not withstanding – there is a sense of newness in the Sunshine State.

“We’re coming in here as a new coaching staff with a clean slate,” said Boughner, he himself a newcomer manning an NHL bench as a head coach for the first time. “We don’t have any preconceived ideas of how players played last year.”

Translation? Nobody is automatically seen as being above anybody else. So says Tallon, who has reiterated on more than one occasion that the best 23 players will make the Panthers roster come October.

That unique feeling of a level playing field manifested itself on Monday morning in a spirited training camp scrimmage that saw 11 goals from 11 different participants in a game that served as a first chance this fall for dozens of Panthers prospects to prove their worth as NHL commodities in front of their veteran GM and rookie bench boss.

Perhaps no young man on the ice was more prepared to take on that stage as much as 21-year-old Jared McCann. A former first-round pick who saw 68 games in the NHL as a 19-year-old rookie with the Vancouver Canucks two years ago, McCann endured a tough first season in the Florida organization, one that featured his first “demotion” to the AHL as a 20-year-old last season.

With the season’s final weeks looming and Springfield out of playoff contention, McCann used his remaining “auditions” in game action to make a huge statement, potting four goals in the final six periods of his season, with a hat trick leading the way in a 7-0 rout of Bridgeport on April 14.

In the offseason, the third-year pro took on a new training regimen, a program whose clientele include NHL mainstays like Vancouver’s Michael Del Zotto and Dallas’s Tyler Seguin, and McCann’s superiors have taken notice, in particular Tallon.

“Night and day,” Tallon said of the difference in McCann’s game from the spring to the fall. “Our coaches in Springfield did a great job developing him in the second half, and he took it upon himself to train and get in better shape. He’s been arguably the best player in training camp so far.”

McCann, in turn, has felt a distinct change in his own game and mindset.

“(Thunderbirds head coach Geordie Kinnear) helped me out a lot with confidence (last season),” McCann stated. “He brought me in pretty much every day; we worked on video, worked on my shot. In the end, it paid off. The coaching staff has all the confidence in me, and I’m ready to show them they made the right decision.”

McCann’s snipe moving down the off-wing was perhaps the most eye-opening moment in the 11-goal scrimmage display, but Panthers fans’ attention may have been more inclined to look to the blue line for the day’s most enticing storyline.

As practice was going on as scheduled Sunday, it was something that occurred behind closed doors that would ironically crack the NHL door open for two Thunderbirds stars come Monday morning.

Citing a need for size on the wing, Tallon acquired NHL veteran left-winger Jamie McGinn from the Arizona Coyotes in exchange for defensemen Jason Demers. With a full complement of healthy blue liners including Demers heading into training camp, it seemed that Springfield stalwarts MacKenzie Weegar and Ian McCoshen might be competing merely for the right to be the Panthers’ seventh defender – more or less, a “first call-up.”

24 hours later, each man has his sights set a touch higher. 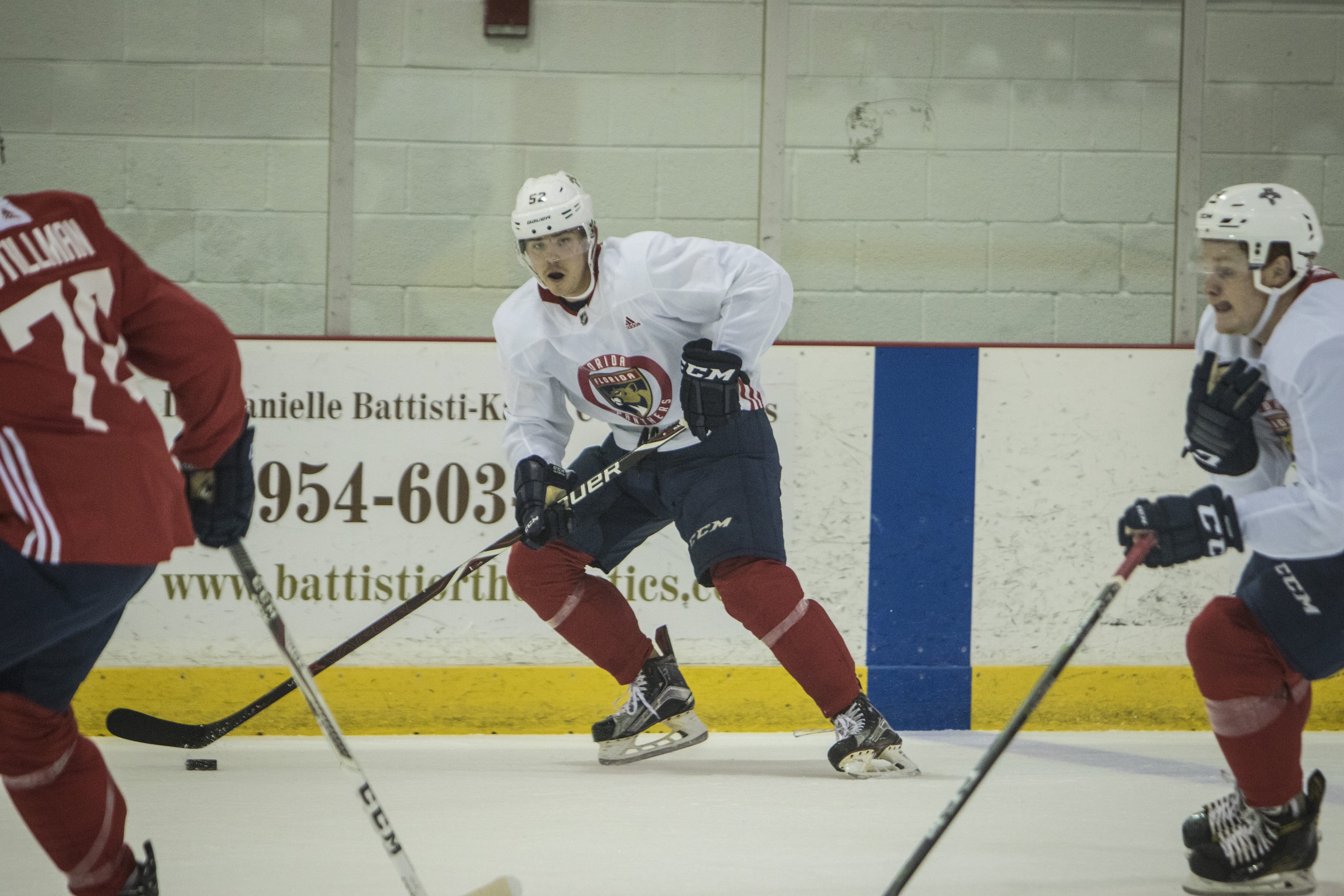 “(Weegar and McCoshen) showed themselves that they could play at the (NHL) pace,” said Tallon. “They both don’t look out of place. (Their three-game NHL call-ups in April) gave them the energy and the confidence to know that, this offseason, they had something to work for, and that they had a chance to make the big club. We’re going to give them every opportunity to succeed.”

A rare constant in a season that featured a sea of different players around them in Springfield last year, the two defense partners now find themselves in the midst of competition, something not lost on either young star, try as they might to downplay the surroundings.

“There’s always a little bit of pressure coming into camp,” said Weegar. “I’m just trying to battle and stay positive and control what I can control.”

“Being able to get a call-up at the end of the year definitely gives you the confidence in the summer that you can play in this league, and it just makes the summer go by a lot slower,” McCoshen added. “You want to come back and earn the spot.”

It is not uncommon territory for young defenders to get a chance to stick at the NHL level. Just a year ago, Mike Matheson – a teammate of McCoshen’s in his collegiate days at Boston College – parlayed a stellar camp into a full rookie season in Florida that saw the smooth skater play in 81 games in 2016-17 after a three-game audition at the end of the 2015-16 regular season. McCoshen and Weegar each received the same three-game audition period this past April, providing more credence to the end-of-season call-up holding more meaning than it may appear. Their steadiness has not been lost on Boughner, either.

“There’s not going to be decisions made (on the back end) until we move along, but they’re knocking at the door for sure, and it’s probably one of the reasons where it allowed us to make (the Demers trade),” said Boughner.

More decisions loom in a hurry for Boughner, Tallon, and the rest of the Florida front office, as the Panthers will split the squad for a pair of preseason tilts against the Nashville Predators on Tuesday.

The Springfield Thunderbirds open their preseason slate on Friday, Sept. 29 against the Providence Bruins at the MassMutual Center at 7:05 p.m. ET.