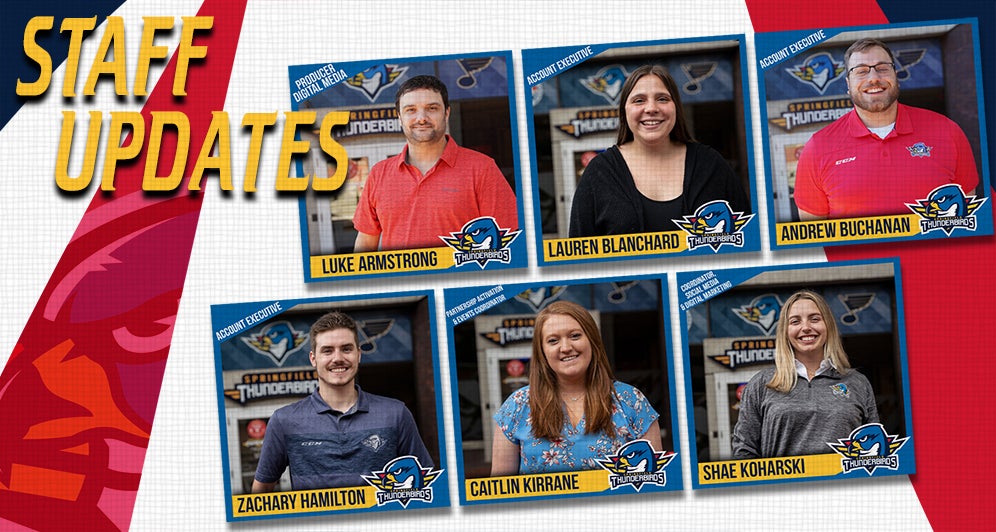 Armstrong, a native of East Amherst, N.Y., joins the Thunderbirds having already accumulated an extensive resume in sports and creative services, including stints with EA Sports and the NBA's Atlanta Hawks.

Blanchard, a native of Agawam, Mass. and an alumna of Colby-Sawyer College, previously served as an intern with the Thunderbirds in ticket sales and marketing. She also has worked locally for Springfield-based Get Set Marketing as a digital marketing manager.

Buchanan, a native of Stafford Springs, Conn., joins the Thunderbirds following three seasons with the WNBA's Connecticut Sun and the NLL's New England Black Wolves. In that role, Buchanan served as an account executive with a focus on group ticket sales.

Hamilton, a native of East Bridgewater, Mass., is a 2016 graduate of Western New England University in Springfield. A former Springfield Falcons intern, Hamilton previously spent time with the Boston Pride of the NWHL as the team's business director from 2016-2020.

Kirrane, a native of Boston, Mass., has previously worked in minor league baseball with the Wilmington (DE) Blue Rocks as a marketing assistant. She also has spent time in the AHL with the Providence Bruins before arriving in Springfield.

Koharski, a native of Russell, Mass. and a Baylor University alumna, joins the franchise after a stint with the ECHL's Florida Everblades during the 2020-21 season in the Everblades' social media, marketing, and digital content department.

For more information or to become a 2021-2022 Springfield Thunderbirds ticket member, call (413) 739-GOAL (4625) or visit www.SpringfieldThunderbirds.com.