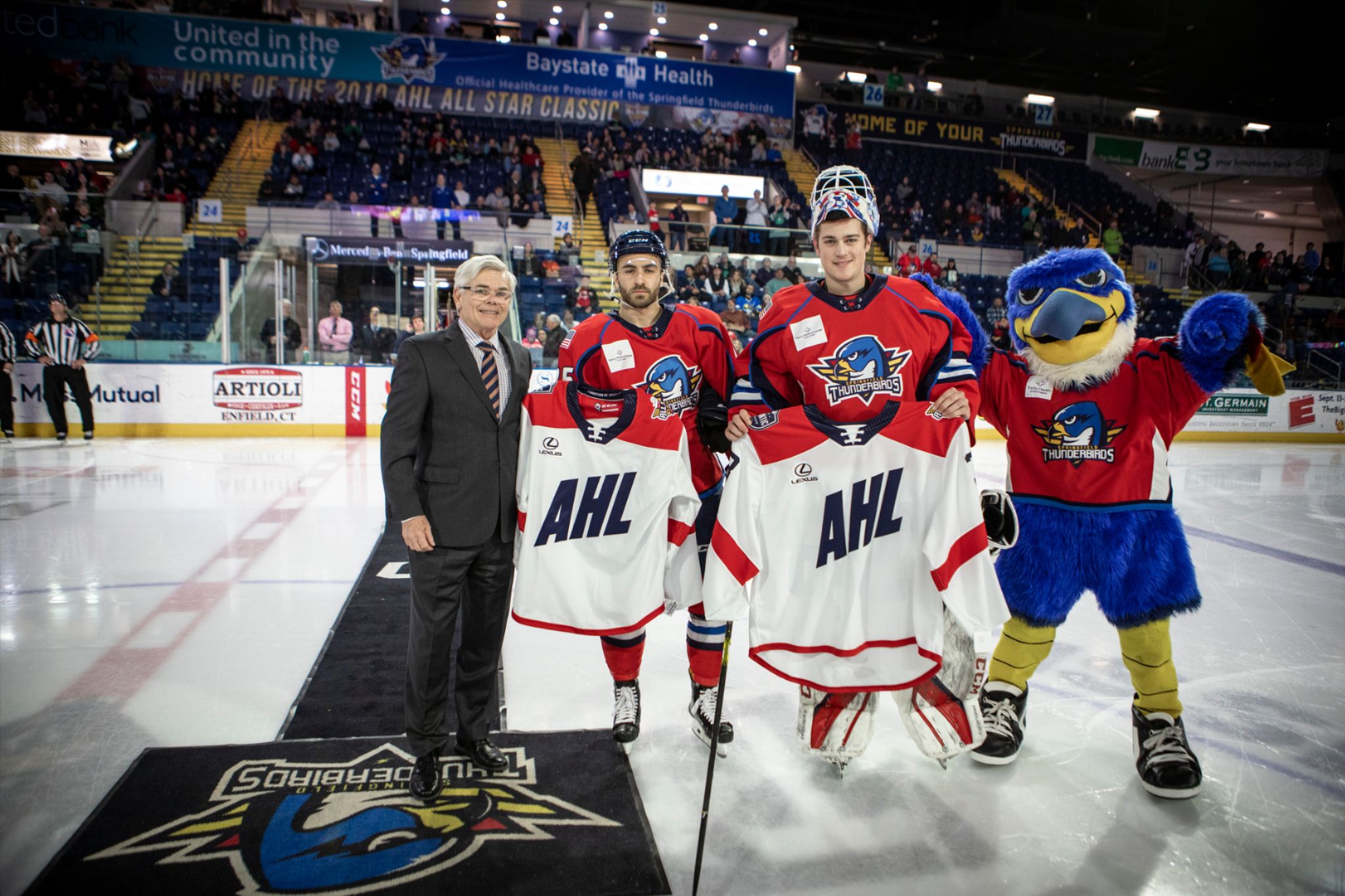 As the MassMutual Center completes its facelift in preparation for the 2019 Lexus AHL All-Star Classic presented by MGM Springfield, the air around the Thunderbirds has had a crisp feel to it in 2018-19.

A 7-0-0-2 start had a fan base buzzing about aspirations of a first playoff berth in team history after two seasons stopped shy of postseason hockey the preceding seasons. Entering Friday’s action, the Thunderbirds already secured 50 points through 44 games while boasting a top-five offensive attack and a power play that has proven lethal to all in their path (26.6% efficiency, 59 power play goals).

Perhaps fittingly, on a team meshing veteran leadership with young talent, the club’s two All-Star representatives are testaments to head coach Geordie Kinnear’s clear-cut, team-first expectation of what it means to wear the Thunderbird logo. But it is how goaltender Sam Montembeault and winger Anthony Greco arrived at this stage in that careers that epitomize the spirit of the All-Star Classic.

For Montembeault, the spotlight is obvious, complete with all the heat and pressures heaved upon a starting goaltender – much less one who has drawn the phrase “future NHL starter” to pundits in south Florida, even as he continues to solidify his skill set.

Yet at 22 years of age, the Quebec native exudes a trait that sometimes evaporates under the weight of such pinpointed scrutiny of the man behind the mask. Montembeault is known throughout the locker room for an exuberance and a carefree poise rarely seen in such a competitive environment.

“I’ve always been an easygoing person,” says Montembeault. “I like having fun, being around my teammates and enjoying the moment.”

The moments have been equal parts fun and productive in the young All-Star’s sophomore campaign. On top of being a constant source of smiles and laughter, Montembeault has shown a stopper mentality, earning points in 20 of his 28 decisions, including a 7-1 start.

“We had so much success at the beginning of the year that I think it could have been (any of) a lot of guys that could have gotten (to the All-Star Classic),” Montembeault concedes.

Even though the goaltender is well aware of the “horrors” goaltenders have to face in a show typically reserved for offenses, Montembeault is not quieting the idea of having a flair of his own.

While the T-Birds’ backstop awaits the day goaltenders could be involved in fastest skater competitions – in which, for the record, “Monty” believes he could excel – another Thunderbird has been blazing a trail in a career predicated upon silencing critics.

At under six feet tall, and like so many other players of slighter build, Greco went undrafted into the NHL, in spite of a successful four-year run at Ohio State University. In his collegiate tenure, Greco established himself as a vaunted speed threat and a respected team captain at one of the most iconic schools in the country.

However, professional success was never seen as a certainty for Greco the way it was foretold for Montembeault.

“(Geordie Kinnear has told me) I’ve had a chip on my shoulder,” Greco recalls when he looked to establish his spot with Springfield two seasons ago. “You’re trying so hard to prove people wrong and prove yourself right, but it can kind of be a detriment because sometimes you’re trying too hard (to prove your worth).”

Whatever amount of worth he needed to display, Greco has left little doubt in the eyes of his peers. After being on an AHL contract in 2016-17 and scoring 16 times, Greco’s role and his game skyrocketed in his own sophomore season. His 29 goals set a high watermark for the Thunderbirds in team history, and his six shorthanded goals paced the entire American Hockey League.

With an NHL contract in hand, and before the midpoint of just his third professional season, this undrafted New Yorker got his first sniff in the NHL this past December, debuting for the Panthers against the Minnesota Wild. An All-Star appearance ranks closely behind.

“It’s pretty cool to get recognized. With how passionate our fans are, I’m sure it’ll be pretty cool to be a part of (the All-Star Classic) in Springfield.”

Thunderbirds fans have become accustomed to Greco’s speed game, which has left many a defenseman in its wake. With the All-Star Skills Competition just days away, a new goal has entered into the mind of the 25-year-old Greco.

“For me, it would be cool to try to break the (fastest skater) record,” Greco said, should he participate in the competition. “I’d be lying if I said I wasn’t trying to go in there and break it.”

Chris Summers’ 13.324-second lap has stood as the top speed for six seasons, and it’s a mark that Greco will try to beat amid some playful pressure from his own locker room.

“I know the guys would get a kick out of it if I was able to do it.”

The 2019 Lexus AHL All-Star Classic presented by MGM Springfield begins on Sunday night at 7:00 p.m. with the All-Star Skills Competition.