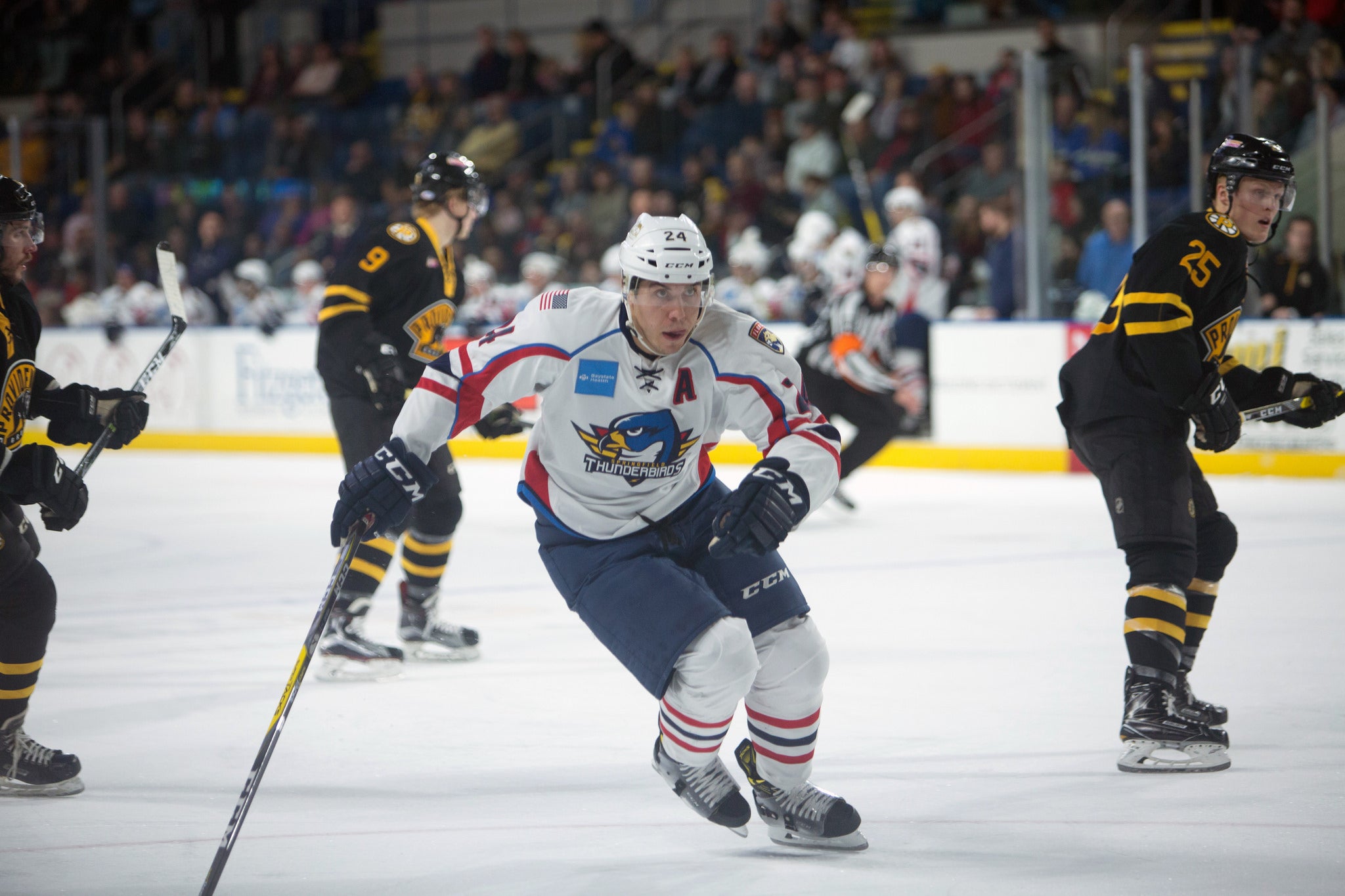 On a 2016-17 Springfield Thunderbirds team that saw more than 30 players aged 25 or younger get game action, Ryan Horvat may have seemed more like a savvy veteran than just another 24-year-old.

After all, Horvat already had two professional seasons under his belt in the Los Angeles Kings organization. His rookie season, in 2014-15 with the Manchester Monarchs, was a banner year complete with 50 regular season wins and a Calder Cup championship on a team that featured current NHL stalwarts Jordan Weal (PHI), Derek Forbort (LA), and Colin Miller (VGK) among others.

“Being on older teams before Springfield, I had learned from some of the veterans in the Kings organization, and I think Geordie (Kinnear) liked that (when I arrived),” Horvat said.

Despite the prospect of playing in his third different city in three pro seasons, with a completely new set of teammates, you would never have guessed it for Horvat.

“The group of guys were all welcoming. Everyone had a great personality and a great attitude towards me and towards Springfield, which helped a lot.”

Horvat’s Calder Cup past and unmistakable grit earned him an “A” on his jersey and a pivotal leadership role under first-year head coach Geordie Kinnear. Now, for the first time in his pro career, Horvat will not need to move a new AHL city.

“(Signing a new contract early in the summer) provides peace of mind for me. It’s allowed me a chance to heal and get in shape for the upcoming season.”

Horvat was a fixture in the Thunderbirds lineup before injury forced him to miss much of the season’s final two months. Even in spite of being absent on the ice, Horvat was far from being removed from his teammates – a demand and an expectation from his head coach.

Playing in the AHL’s toughest division was not an enviable position for Springfield a season ago, but by no means were they behind the curve either, playing 40 of their 76 games to one-goal margins. However, leaving 25 of those one-goal games on the wrong end of the scoreboard – including seven losses when holding a lead through two periods – is a lesson Horvat readily volunteers as a necessary one for the young Thunderbirds to learn.

“Teams do come back, and they’re not going to just give up because there’s five minutes left and they’re down a goal. With a young team, you kind of don’t realize that. I think that was an excuse, per se, for last year, but this year, we have to compete every night and learn from last year’s mistakes. I think we should be able to overcome those challenges with third period meltdowns, hold teams off and play great for a whole 60 minutes and not 55.”

Horvat and the Thunderbirds’ goal in 2017-18 is not rocket science to figure out, but he knows that last year’s efforts will need to be raised.

“Geordie’s going to be a lot harder on guys this year about winning games and not losing those one-goal games anymore, so making the playoffs is obviously our primary goal.”

That goal also comes with a Panthers’ organizational motto tied to it: the best players will play, regardless of veteran status, experience, and previous ties to the team.

“There’s guys that want to take your jobs. Obviously, I want to try to make a statement to the Florida organization. The AHL is there for a reason, and that’s to play in the NHL. For me, (training camp) is an audition.”

Should Horvat return to Springfield after Panthers camp, one can only expect his leadership presence to be even more vital in 2017-18, with both captain Brent Regner and leading goal-scorer Paul Thompson on their next journeys to the Stars and Golden Knights organizations, respectively.

“A lot of fans don’t see it, but Brent was always there despite being hurt. He played a big role with the young guys making sure everyone was positive and being motivated. Paul on the other side was there pretty much all year, except when he was up with (the Panthers). The young guys could see he was a guy who’s been in the league for a few years and still trying to make a jump to the NHL to be a full-time guy.”

While he admits a certain sting to losing two letter-wearing teammates, Horvat and the returning players hold a similar, less tangible objective heading into their second Thunderbirds campaign.

“Just to see everyone grow as a player throughout the year and have guys go up to play for Florida is one of the goals we want to have (this year). You just have to go game-by-game, day-by-day.”

The Thunderbirds open their second season on the road on Oct. 7 against the Providence Bruins before returning home for the home opener on Saturday, Oct. 14 against their I-91 rivals, the Hartford Wolf Pack.