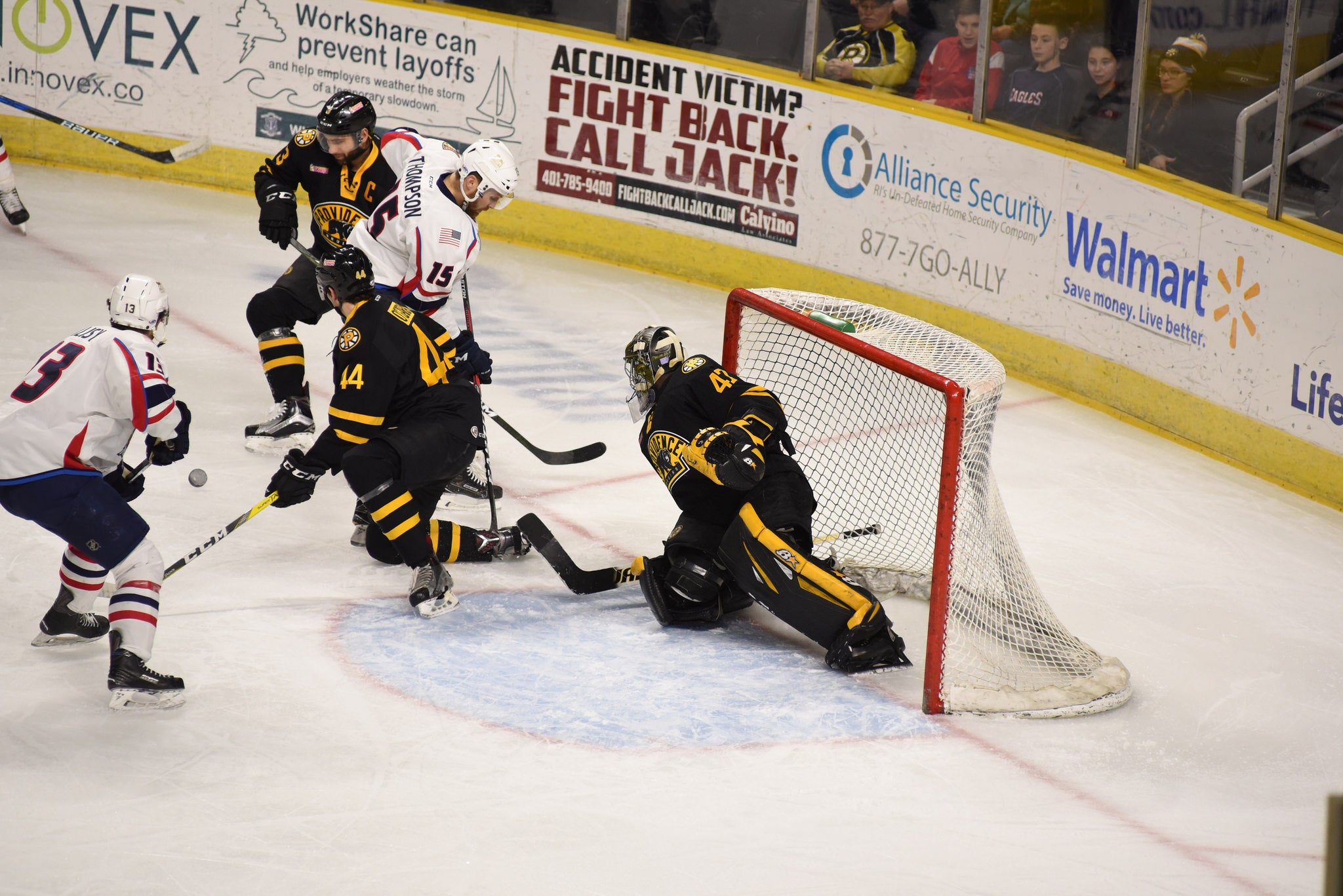 Providence, RI - The Springfield Thunderbirds (26-27-8-2) could not hold onto a pair of advantages on Saturday night, falling by a final score of 4-2 against the Providence Bruins (36-18-5-4) at the Dunkin' Donuts Center.

On the contrary, the Thunderbirds would not waste their chance with a power play at 6:56 of the period.Paul Thompson fired a high-rising shot from the left circle to create a rebound off Bruins goalie Malcolm Subban. Dryden Hunt was the benefactor of the second chance opportunity as he swept it home to give Springfield the 1-0 lead.

That lead would only last 1:08 though, as Austin Czarnik sprung Chris Porter on a breakaway to tie the score at 8:04 of the period.

Providence would be gifted three more power play chances in a first period penalty parade for Springfield, but the penalty killers and goaltender Sam Brittain were marvelous for the Thunderbirds, who went 4-for-4 with the man down in the first frame.

Brittain, who saw 15 shots his entire last start on March 11, made 14 stops on 15 shots in the first period alone in Providence.

The second period saw a similar start, as the Thunderbirds again opened the scoring courtesy of their top line. This time, off a turnover in the left wing corner, Chase Balisy spotted Thompson camping out all alone to the side of the Bruins net, and the Thunderbirds' leading goal scorer tapped home his 16th at 1:25 to restore the Springfield lead, 2-1.

Playing at even strength with less than 10 seconds left in the period, Anton Blidh set himself up to poke a backhanded rebound behind Brittain at 19:52 to send the game to a 2-2 tie after two periods.

The momentum was evident for Providence as the third period began, and Danton Heinen wasted little time finishing a perfect pass from Sean Kuraly at 1:39 to give the Bruins their first lead, 3-2.

Springfield had trouble generating pressure in the third and were outshot for the game by a 34-22 margin. After seeing one last-ditch power play come up empty in the final 3:36, the Thunderbirds relented an empty-net goal to Kuraly to wind out the game's scoring.

With their four-game winning streak snapped, the Thunderbirds will get another chance to start a new streak on Sunday on home ice at the hands of their Friday opponents when the Albany Devils visit the MassMutual Center for a 3:05 p.m. ET puck drop to close out the teams' season series.