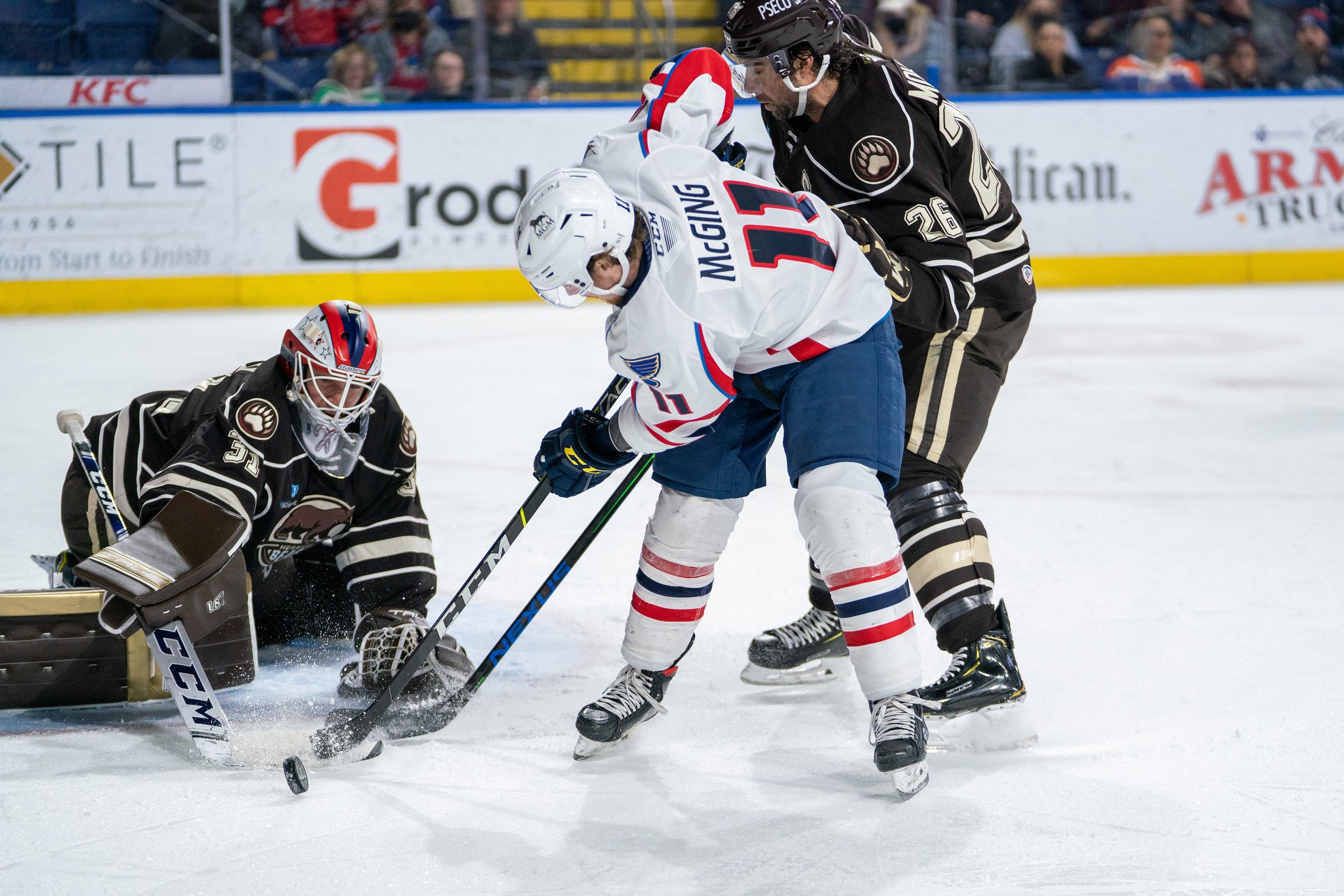 Pair of PA Rivals to Visit Thunderdome This Week

SPRINGFIELD, Mass. - The Springfield Thunderbirds (7-6-0-3) complete a five-game homestand with a pair of divisional matchups against Atlantic Division opponents from Pennsylvania on Wednesday and Saturday. First, the Hershey Bears (9-4-2-0) pay their first visit to the Thunderdome on Wednesday at 7:05 p.m. for the first Mayflower Marathon Night.

Fans are encouraged to bring non-perishable food items for donation to the Mayflower Marathon, benefiting Open Pantry of Springfield and providing meals to those in need this holiday season. More information on the T-Birds' partnership with Rock 102 and the Mayflower Marathon can be found by clicking here.

The on-ice matchup between the T-Birds and Bears will have a plethora of familiar faces on the opposition as Hershey enters the week with five former Thunderbirds on their roster. Most notably, the Thunderbirds' leading point producer from the 2021-22 regular season, Sam Anas, is in his first season with the Chocolate and White, having posted 10 points over 15 games this season. Other former Thunderbirds on the Bears roster include forwards Mike Sgarbossa (2016-17) and Henrik Borgstrom (2018-20), along with defensemen Jake Massie (2019-20) and Dylan McIlrath (2016-17).

Hershey registered wins in four of the six matchups against the T-Birds during the 2021-22 regular season, but Springfield has a 6-3-0-0 record in the last nine games contested inside the MassMutual Center.

The week continues as the T-Birds unveil a third jersey for the first time in club history on Saturday, Nov. 26 for a 7:05 p.m. puck drop against the Wilkes-Barre/Scranton Penguins (7-5-1-1). The T-Birds got the better of their division rivals on Nov. 12 in a 3-2 win at the Mohegan Sun Arena at Casey Plaza. Former Penguin Anthony Angello tallied the game-winning goal in the final period, his first of four over his last three games played. Angello recorded a hat trick in Springfield's last contest, a 6-4 win on Sunday afternoon against Lehigh Valley.

It will be the Penguins' first visit back to the Thunderdome since Game 2 of the Atlantic Division Semifinals on May 12, best remembered for Joel Hofer's playoff goalie goal, only the second such occurrence in playoff history in the American Hockey League. Springfield swept the Penguins, three games to none, in that series en route to the Calder Cup Finals.

In addition, Thunderbirds Dunkin' Holiday Packs are on sale now. Starting at just $95, fans can get their hands on the best gift for T-Birds fans this holiday season, complete with two tickets to Jan. 7 (Throwback Night vs. UTC), four anytime ticket vouchers redeemable to any remaining 2022-23 regular season game, a Dunkin' gift card, and a T-Birds winter hat. Purchase yours now by clicking here.