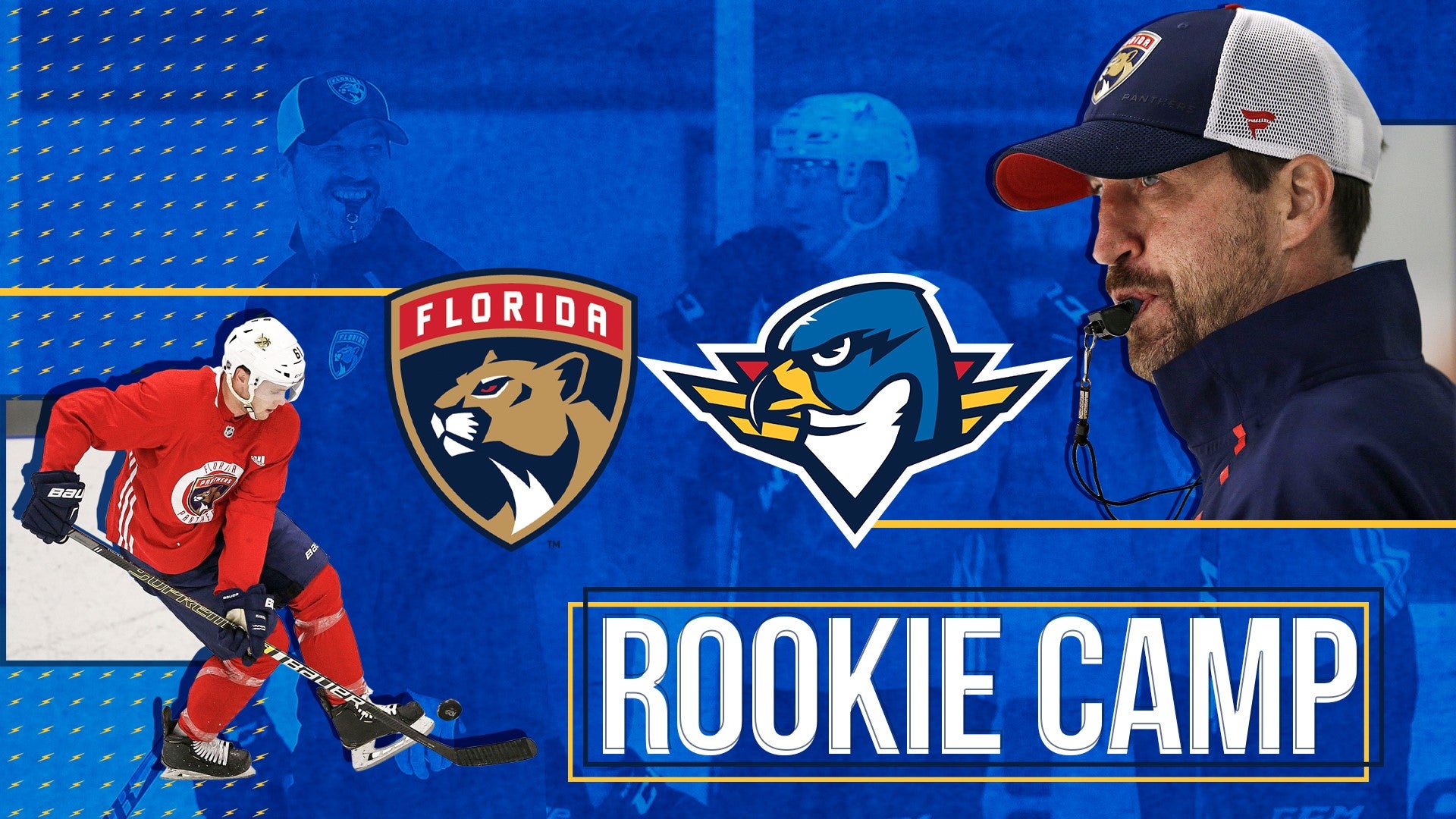 On the verge of what many pundits are proclaiming the most anticipated Florida Panthers training camp of the decade, a unique energy has encircled Coral Springs, Fla. at the Panthers’ facilities, and that should come as no surprise.

The butterfly effect can be felt from all of those additions, as the Panthers could have approximately 2/3rds of their 23-man roster all but finalized, barring unforeseen circumstances, when training camp opens on Sep. 13.

With potentially just a handful of roster spots up for grabs among the dozens of training camp players, a definitive word enters Thunderbirds head coach Geordie Kinnear’s brain: hunger.

Day One of rookie camp in the books! Hear from some familiar faces as they hit the ice in Florida. https://t.co/3xMooE3JaE

Among those chomping at the bit for NHL jobs are some of Springfield’s and Florida’s key contributors from 2018-19. A group of 25 such prospects got a two-day head start on the main camp invitees on Tuesday and Wednesday at the Panthers’ rookie camp in Coral Springs. Headlining the action were defensemen Riley Stillman and Brady Keeper, in addition to young forward prospects Henrik Borgstrom, Aleksi Heponiemi, and Owen Tippett.

While Stillman and Keeper will be jockeying for a spot as the sixth or seventh defensemen on a Florida roster that has ordinarily kept seven, Borgstrom is believed to have the inside track to a permanent NHL home. Heponiemi’s and Tippett’s weeks will present a much tighter competition, with both players embarking on their debut North American professional season.

Heponiemi, in spite of his slight 5-foot-10, 147-pound frame, has shown no signs of slowing down his gaudy offensive production, as he followed up a 118-point season in the WHL in 2017-18 with 46 points in just 50 games for Karpat in the Finnish Elite Liiga at age 19 and 20. Florida’s second-round pick in 2017 has also been learning from a top mentor – Panthers captain Aleksander Barkov.

One thing Heponiemi will not be is intimidated.

“I want to do my best and show (the coaches) that I can play (in Florida.) There’s so many great players, and they’re all fighting for the spot. I’m looking forward to (the competition),” Heponiemi said.

Tippett was among the elder statesmen of rookie camp alongside Borgstrom. After a brief NHL stint in 2017-18, during which he scored his first goal, Tippett was returned to the OHL, where he posted back-to-back seasons of 36 and 33 goals. He added 11 more in leading the Saginaw Spirit to within one game of the OHL Finals this past spring.

“He came to Springfield (two years ago), played a couple games and then had the big year (in junior) last year. He’s in great shape, wants to get better, and you can he worked on his game,” Kinnear observed.

Tippett figures to be battling for a wing position in Florida against the likes of Jayce Hawryluk, Dryden Hunt, and Denis Malgin, as well as veteran Troy Brouwer, who is back at Panthers training camp this week on a professional try-out. Brouwer won a Stanley Cup as a member of Quenneville’s 2009-10 Chicago Blackhawks.

The task to make the Panthers could be loftier for Stillman, who at age 21 became a reliable component to the Springfield blue line in 2018-19, posting a +8 rating and 17 points in 59 games in the AHL. While he made his NHL debut for a single contest in Arizona last season, Stillman will be part of a crowded blue line competition that includes Josh Brown, Ian McCoshen, and Keeper among others fighting for perhaps a single spot.

That did not stop Stillman’s AHL coach from passing along glowing praise at rookie camp.

“(Riley’s) got an identity. He can play any style of game you want,” said Kinnear.

While his defensive game kept a consistent rhythm for much of his rookie season, Stillman found himself in need of a boost in offensive confidence after the holiday break in his rookie season. To help in that endeavor, Kinnear made an unorthodox proposition to his young player on Jan. 5: playing the wing. It was not a foreign concept for Stillman, whose father, Cory, skated in more than 1,000 NHL games and captured two Stanley Cups as a reliable and dangerous playmaker throughout a pro career that stretched nearly two decades.

The payoff was immediate; Stillman scored his first AHL goal in his first game up front after a 25-game drought from the blue line, and his head coach saw a shift in mentality from that day forward.

“He had a little bit more fun; he didn’t have to think as much. Once you think as a defenseman, you’re in trouble because it creates hesitation. He scored, and then he became more relaxed and jump-started from there. It ended up looking like a good decision on our part but it was just something that happened and it worked out.”

With Thursday as a rest day before the full group of 61 players begins camp on Friday, Quenneville himself did not brush off the wisdom a two-day rookie camp can impart on prospects.

“For the younger kids coming in, it’s an opportunity for them to show that they’re not happy where they’re sitting in the food chain,” Quenneville said Wednesday. “Everybody should have an opportunity to move ahead and not be satisfied with where they’re sitting. Almost every single camp (my coaching staffs) have been around, there’s always one guy or two guys who make (decisions) tough on us.”

Quenneville and Panthers President of Hockey Operations and General Manager Dale Tallon will be the ones facing those decisions as Friday looms to mark the start of “auditions” in Coral Springs, and one can speculate that the tougher the decisions, the better off the Florida and Springfield competitions will be.