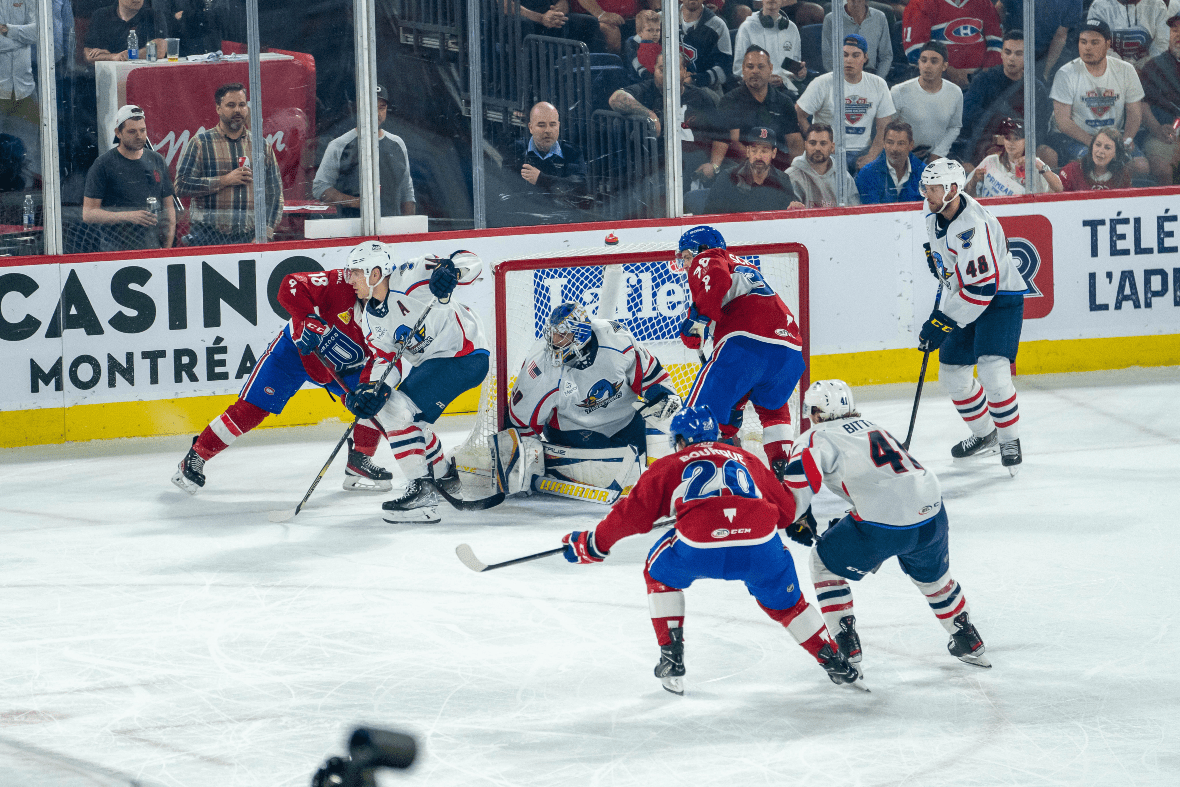 LAVAL, QC - The Springfield Thunderbirds saw their Eastern Conference Finals series get evened up by the Laval Rocket on Friday night at Place Bell, with the home team coming away 3-2 victors in overtime.

After giving up the first goal in each of the first three games in the series, the T-Birds went right to the attack in Game 4. Picking up right where they left off in their nine-point Game 3 performance, the line of MacKenzie MacEachern, Dakota Joshua, and Will Bitten got Springfield its first 1-0 lead of the series just 3:47 into action.

MacEachern would be the beneficiary, taking a drop from Bitten along the right wing and driving to the net before elevating a forehand over Cayden Primeau's glove hand for his sixth goal of the playoffs.

3:39 later, that line was back to work, and Joshua cashed in by poking a rebound in the blue paint in behind Primeau and the goal line at 7:26 to make it a 2-0 game.

As the period entered its dying moments, the Rocket warmed offensively to the tune of an incredible 26 shots on goal in the opening 20 minutes. With Springfield down two men and just 2.7 seconds on the clock, the game turned on a controversial sequence to close the period.

The Rocket won a faceoff deep in the Springfield zone, and Xavier Ouellet pulled the trigger on a one-time slap shot off a quick feed from Louie Belpedio. Former T-Bird Jean-Sebastien Dea deflected the shot and squeezed it through Joel Hofer at around the same time the green light went off, signifying the end of the first period.

After a review, the officials deemed the goal did count, and as a result, it was the first power play goal of the series for either team, bringing Laval back to within a goal, 2-1, as the game went into the second period.

The Rocket rode the momentum to a tying goal just 2:37 into the middle stanza when Cedric Paquette sneaked a wrist shot under Hofer's glove on the left-wing side to tie the game, 2-2.

Primeau and Hofer then traded saves for the next 37 minutes of game action. Springfield was snakebitten by two different goal posts in the final minutes of regulation, as Calle Rosen rang a left-point slapper off the post at even strength. With 3:38 to play, the T-Birds earned a power play with a chance to retake the lead, and on that advantage, Nathan Todd snapped a wrist shot that beat Primeau clean but clanged off the underside of the crossbar before somehow staying out of the net.

For the second time in the series, overtime was needed, and after Primeau fended off a stretch of nearly two straight minutes of Springfield offensive zone time, the Rocket rewarded their goalie with the game-winning goal. Sami Niku worked the puck toward the slot, and Rafael Harvey-Pinard spun to his forehand and found a way to sneak a shot through Hofer at the 4:06 mark of the extra session to even the series at two games apiece. It was the third straight game with a goal for Harvey-Pinard.

The full remaining schedule for the Eastern Conference Finals is as follows - games marked with an asterisk (*) will be played only if necessary. MGM Springfield will once again host a Watch Party for Game 5 for T-Birds fans at its outdoor Plaza and at TAP Sports Bar.

Game 6 will now be played on Monday night inside the MassMutual Center, with puck drop set for 7:05 p.m. - tickets are available at the link below.

Thunderbirds playoff tickets are on sale now! To purchase your seats, call (413) 739-GOAL (4625) or visit www.SpringfieldThunderbirds.com.