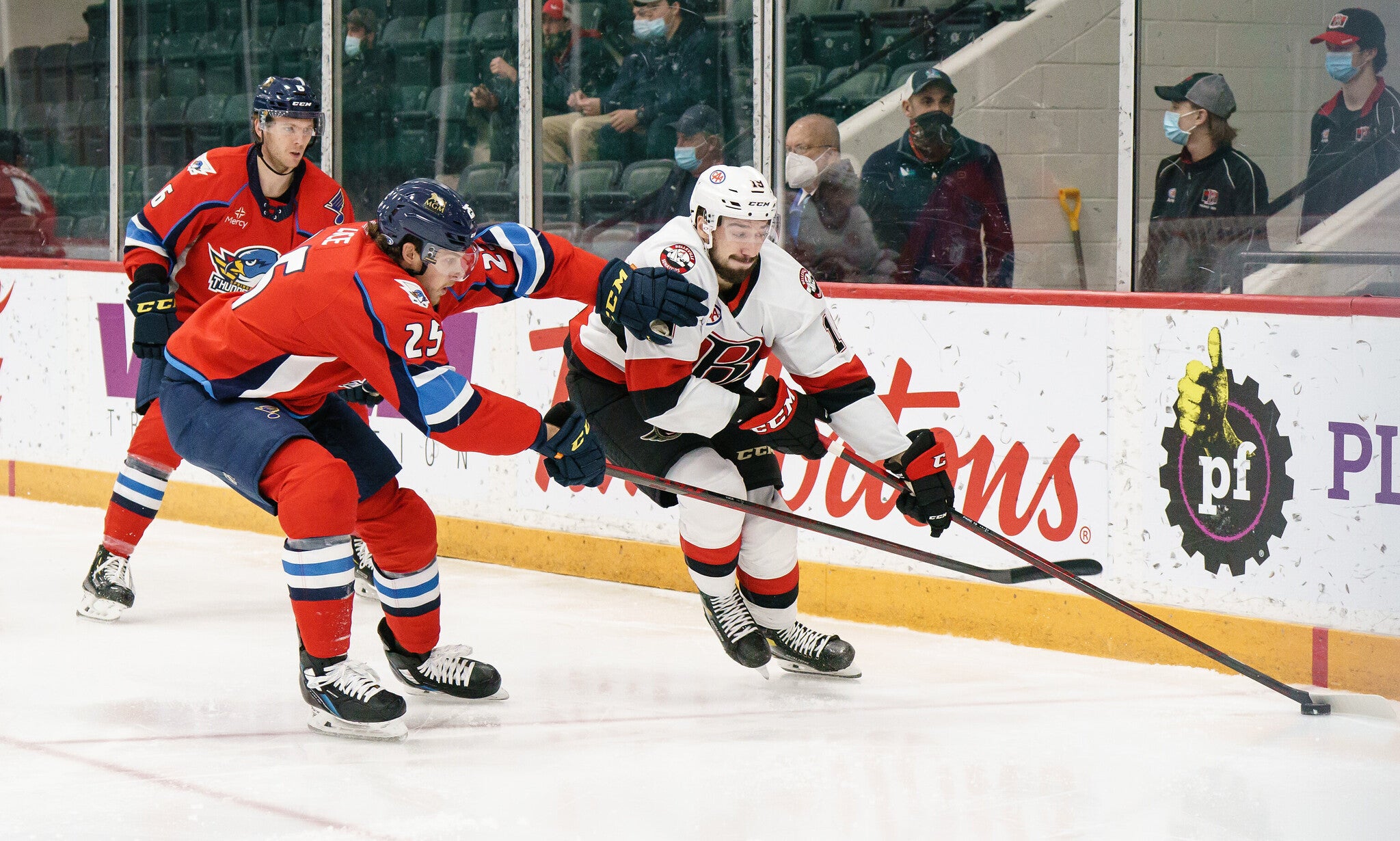 T-Birds Fall to Sens Amid Controversy

BELLEVILLE, ON – The Springfield Thunderbirds (18-9-2-1) fell victim to a controversial final period in a 7-5 defeat at the hands of the Belleville Senators (13-14-0-0) on Saturday night at CAA Arena.

Sam Anas was at the top of his game from the onset of Saturday's action. Just 1:17 into the action, the T-Birds winger took a drop pass from Nathan Walker in the slot area and snapped a wrister past the glove of Belleville goaltender Kevin Mandolese to give the Thunderbirds the 1-0 lead. Matthew Peca picked up the secondary helper.

Peca and Anas would figure into yet another brilliant offensive play when Springfield got its first abbreviated power play chance just over six minutes later. At the 7:51 mark, Anas entered the zone on the right wing and chipped the puck to the left-wing side to Hugh McGing, who then touched a feed into the slot toward Peca in front of Mandolese's net. In one motion, Peca spun 360 degrees to get the puck from his backhand to his forehand, and he beat Mandolese with the spin-o-rama to make it a 2-0 game. Springfield's sizzling power play improved to 3-for-4 on its first four man-advantage chances of the weekend series.

Joel Hofer drew the assignment in net for Springfield, and like Charlie Lindgren the night before, it would be a busy first period for the T-Birds goalie, as Belleville turned 14 shots on the cage. Michael Del Zotto would get Belleville back within a goal with his third goal in two games, a one-time snapper from the right circle that found the upper portion of the twine at the 17:41 mark to make it a 2-1 score at the end of the frame. The second period brought a second straight night of chaos between the two teams.

Just 1:23 into the frame, and with Springfield on a power play, Rourke Chartier came bearing in on Hofer with a breakaway bid. Chartier's wrist shot hit Hofer and forced the Springfield goaltender to slide deep into his crease. The referee on the scene immediately signaled a goal, and that call was upheld upon further review, giving Belleville a controversial game-tying goal, 2-2.

Frustrated but not deterred, the Thunderbirds and Hofer fended off a handful of Belleville scoring chances, and moments after killing off a Mackenzie MacEachern minor penalty, MacEachern himself found the puck on his stick on a 2-on-1 inside the Belleville zone. With Drew Callin breaking to the net, MacEachern snapped a wrist shot past Mandolese on the glove side to make it 3-2 at 10:11 of the period.

Springfield's sizzling power play reintroduced itself again with less than two minutes to go in the frame, as McGing parked himself in the crease and jammed a loose puck past a fallen Mads Sogaard, who had entered the game to replace Mandolese earlier in the period. Walker and Peca picked up the power play helpers on McGing's seventh goal of the season.

The Senators showed they still had plenty of resolve of their own, as just nine seconds following the McGing goal, Roby Jarventie took a rolling feed from Maxence Guenette in the left circle and wristed a shot to the top shelf behind Hofer to bring Belleville back to within one, 4-3, heading into the third period.

After an uneventful start to the final period, controversy shrouded the third period at the 8:06 mark when three separate minor penalties - interference, interference from the bench, and unsportsmanlike conduct - were all called simultaneously on the Thunderbirds.

With over two minutes' worth of 5-on-3 time, the Sens' power play awakened, as Logan Shaw, Egor Sokolov, and Chris Wilkie scored three consecutive power play goals in the span of 1:41 to put Belleville in front, 6-4. Sokolov added his second of the period at the 12:25 marker to make it a 7-4 lead for the Senators.

Nikita Alexandrov would get Springfield back to within two at 16:41, making the score 7-5, but that's as close as the T-Birds would get.

The T-Birds make the trek west to face the Toronto Marlies on Monday afternoon at 3:00 p.m. at the Coca-Cola Coliseum to complete the three-game Canadian swing.