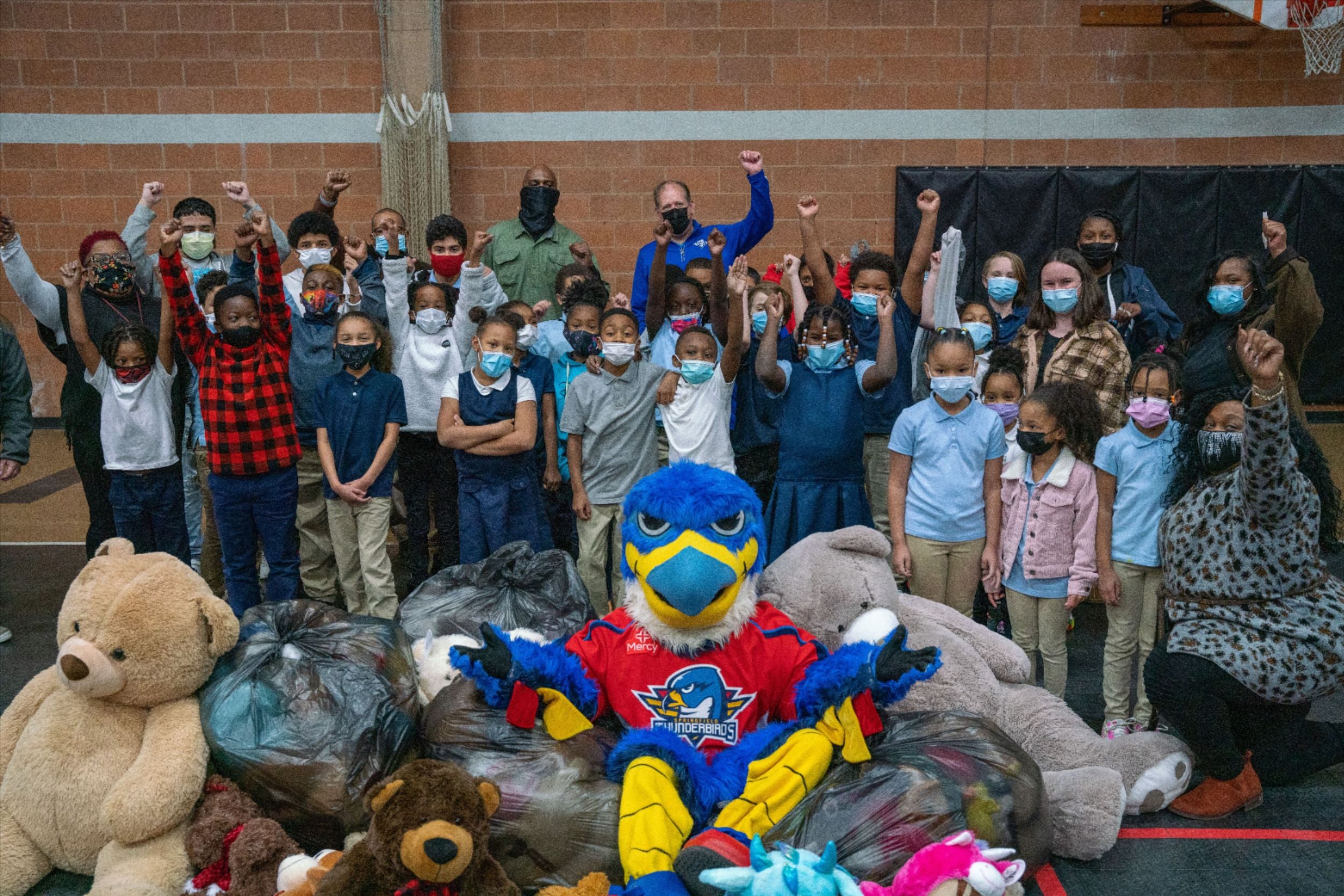 SPRINGFIELD, Mass. – The Springfield Thunderbirds, proud AHL affiliate of the St. Louis Blues, have carried on their mission of being pillars of the Springfield community, with continued support from People's United Bank. Since the start of the 2021-22 regular season, the Thunderbirds have made more than 60 appearances in the community, in addition to charitable initiatives such as Hockey Fights Cancer, Toys for Tots toy drives, and Teddy Bear Toss donations. Many of these events have featured interaction in the community from team mascot "Boomer."

"We at the Thunderbirds pride ourselves on being champions in the community," said team President Nathan Costa. "As much as we love putting on a first-class operation at each of our games, we put equal importance on making a positive impact in our community, whether that is engaging with young people in schools, working in tandem with nonprofit charities, or performing random acts of kindness. We thank our longtime partners at People's United Bank for their continued support and shared philanthropic values."

“We’re proud to support and partner with the Thunderbirds in their many community initiatives and to have the opportunity to be a part of the life-changing impact their efforts are having on local families,” said Jaimye Kelley, SVP Commercial Banking, People’s United Bank. “Community giving and volunteerism is central to People’s United’s mission, and we look forward to continuing our support of the Thunderbirds in 2022 and bringing our shared philanthropic values to communities across Western Massachusetts.”

In the month of November, the Thunderbirds went lavender across their platforms to spotlight the NHL and AHL's Hockey Fights Cancer initiative. Proceeds raised throughout the month went on to benefit a wide array of local cancer-based charities, including the Trinity Health Sister Caritas Cancer Center, CHD's Cancer House of Hope, Baystate Children's Hospital, and the Hockey Fights Cancer charity itself.

Highlighting a busy month of December, the Thunderbirds collected more than 5,000 stuffed animals in the club's annual Teddy Bear Toss on Dec. 11. In a showing of holiday spirit, Thunderbirds staff and Boomer delivered donations of those bears to a wide range of area charities, including the Springfield Boys & Girls Club, Ronald McDonald House, YMCA of Greater Springfield, CHD, Martin Luther King Family Services, and the Boys & Girls Club Family Center.

Furthering the T-Birds' heartfelt gestures, Thunderbirds captain Tommy Cross, together with teammates Michael Kim and Drew Callin, also provided a meaningful gesture at holiday time when the trio purchased a plethora of presents for three local families who were recently displaced from their homes. This marked the second time in his two Thunderbirds seasons that Cross has led such a mission.

Boomer and the team were active in numerous other charitable affairs throughout the fall and early winter. The T-Birds partnered with local elementary schools for yet another successful kickoff to the team's Stick to Reading program, with support from MassMutual. The initiative promotes literacy amongst elementary school students in the Western Massachusetts community. Schools participate in a six-week reading program during the Thunderbirds' regular season, with a reward of tickets to a game for students who complete their reading goals.

For more information on the Springfield Thunderbirds and their charitable contributions, please visit www.SpringfieldThunderbirds.com. To donate to the T-Birds Foundation, click here.