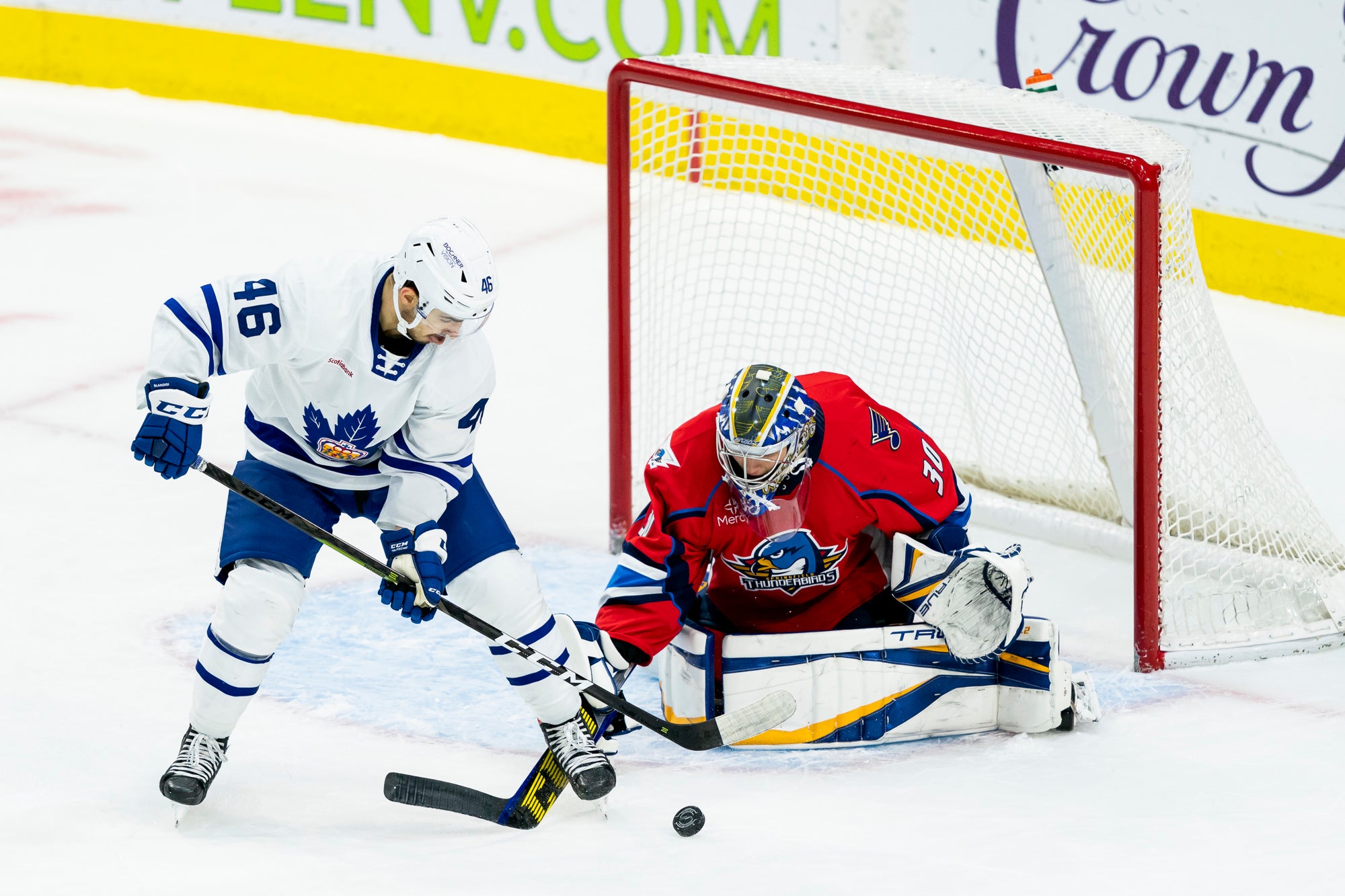 TORONTO, ON – The Springfield Thunderbirds (18-10-2-1) could not catch up to the fast start of the Toronto Marlies (14-10-1-1) on Monday afternoon at Coca-Cola Coliseum. The action happened quickly into the game as the Marlies open up the scoring just 1:40 in with a cross-ice goal from Antti Suomela, giving the Marlies a 1-0 lead. Marlies kept the momentum and 90 seconds later, Alex Steeves tallies his ninth of the season with a rebound from Filip Kral.  Griffin Luce takes a hooking penalty at 5:08, drawing the Marlies' third goal of the afternoon from Bobby McMann from the blue line. Joel Hofer replaces Charlie Lindgren between the pipes with 14:52 left to go in the 1st period.  Killing off a goaltender interference call, Nikita Alexandrov drives one home but is stopped by Joseph Woll but not before Will Bitten nets his 2nd as a T-Bird from the rebound.  Marlies answer back quickly with a top-shelf goal from Antti Suomela, his 2nd of the game. Filip Kral nets his third assist of the game. With 13 seconds left in the 1st, Joseph Blandisi nets a backhand tip past Hofer.  It was an uneventful 2nd period until Dakota Joshua wacks in a mid-air goal past Woll with 2:14 left in the period. This is Joshua's first game back with the T-Birds since his recall to the St Louis Blues. Mackenzie MacEachern and Alexei Torpochenko earn tallies as the helpers.  A quick T-Birds goal 3:34 into the 3rd period, Woll passes the puck behind the net intended for Mac Hollowell, but Keean Washkurak grabs the puck and pokes it past the pads of the unsuspecting netminder to find the back of the net. With less than 1:30 left in the game, Hugh McGing snipes one past Woll with a crisp feed from Calle Rosen. McGing's goal wasn't enough to swing the momentum through the final seconds, and the T-Birds fall 5-4 in Toronto. The T-Birds are back at home in the MassMutual Center for the upcoming weekend - facing the Laval Rocket on Friday the 14th at 7:05 p.m. and the Providence Bruins on Saturday the 15th at 7:05 p.m. with a special Throwback Night.  For more information on the Springfield Thunderbirds and to order tickets, please visit www.SpringfieldThunderbirds.com. To learn more about becoming a Thunderbirds ticket member, call (413) 739-GOAL (4625) to speak to a Thunderbirds representative.