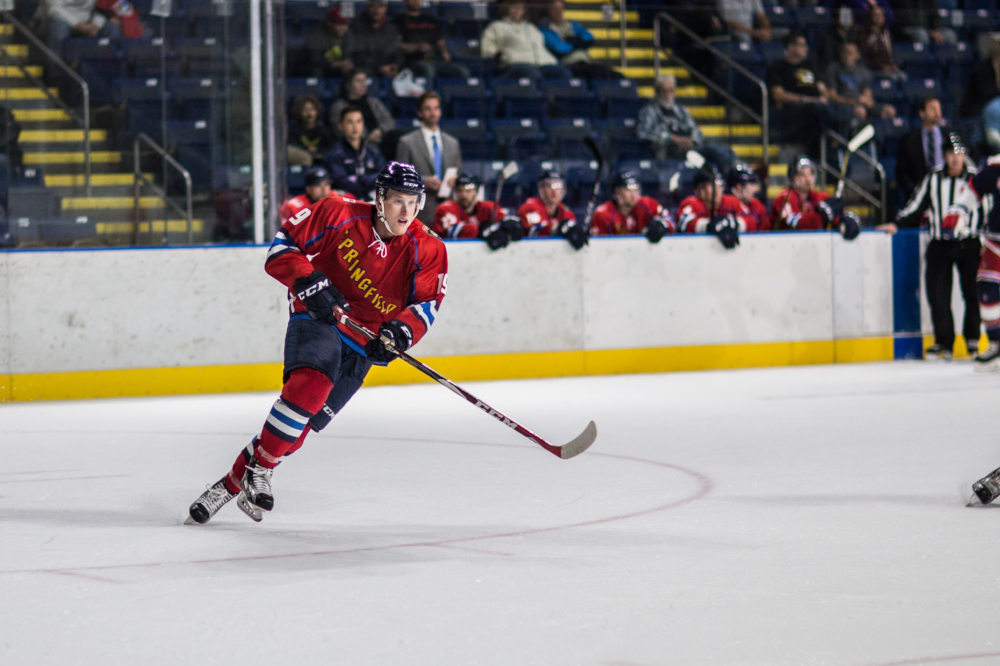 Oct 8, 2016
Springfield, MA – The Springfield Thunderbirds picked up their second win in as many nights by virtue of a three-goal third period in a 3-0 defeat of the Hartford Wolf Pack at the MassMutual Center on Saturday.
The first period saw Springfield outshoot the Wolf Pack by an 11-6 margin, but nothing was settled on the scoresheet. The only entry on the stat sheet came in the form of a Hartford minor penalty to Garrett Noonan in the final two minutes of the period. Mike McKenna got the start in net for Springfield and promptly turned aside each of the six shots he saw.
The best chance of the first for Springfield came off the stick of newly arrived defenseman Mackenzie Weegar, whose point shot was tipped by Stephen MacAulay in front of the Hartford net. However, Wolf Pack goaltender MacKenzie Skapski came up with the reactionary left pad save to preserve the scoreless opening period.
The second period saw Hartford turn the tables on Springfield, outshooting the Thunderbirds by an 11-3 margin in the middle frame. McKenna remained stout, though, helping to kill off the Thunderbirds' lone power play of the frame with a number of flashy saves, including a right-handed glove save on a slap shot bid from the Wolf Pack's Philip McRae.
McKenna's strong second period gave his team time to find a rejuvenated energy into the third period. The Thunderbirds had almost all of the third period action, outshooting Hartford 16-2 in the final 20 minutes, and in the process, Springfield was able to cash in on three chances.
It was apparent that goals on this evening would not come on picturesque plays, but rather on simple ones. That was apparent at the 9:29 mark of the period, as Matt MacKenzie got a point wrister through traffic. Graham Black bodied it down from his hip to his stick and beat Skapski to give the Thunderbirds the 1-0 edge.
Not even two minutes later, similar circumstances created another opportunity. Chase Balisy hopped off the bench to take a feed from Brent Regner. His shot careened off of bodies and off the top of the net before bouncing down in front of the net. From there, Logan Shaw jumped on the loose puck and buried it to push the Springfield advantage to 2-0.
Ryan Horvat rounded out the scoring with an empty netter with just 13 seconds to play. McKenna finished his night with a 19-save shutout and Springfield completed a perfect preseason that saw them outscore their opponents 5-1.
Springfield sits a week away from its first-ever AHL game on Saturday, Oct. 15 against the Lehigh Valley Phantoms in Allentown, Pa. at 7:05 p.m. ET. Coverage can be heard on NewsRadio 560 WHYN as well as on AHL Live.
The Thunderbirds will open MassMutual Center play on Saturday, Oct. 22 for Opening Night presented by MGM Springfield against the St. John's Ice Caps. Preceding the game is the T-Birds Tailgate from 4-6 p.m. at Court Square, adjacent to the MassMutual Center.